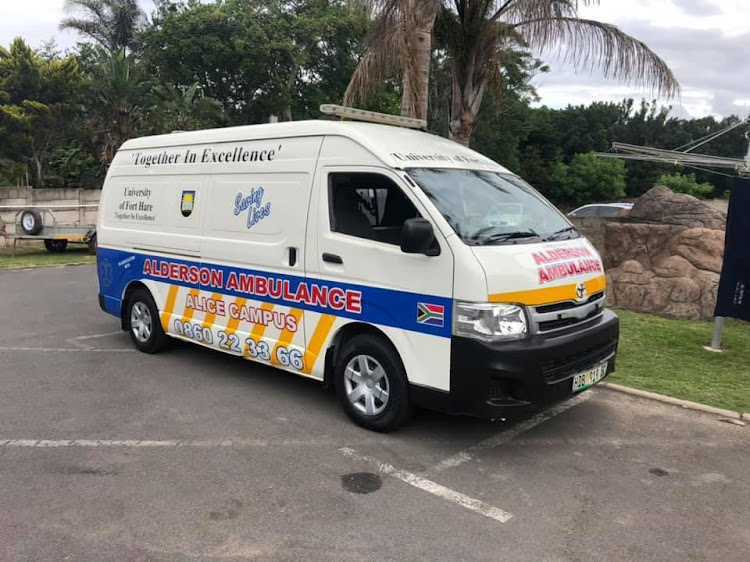 Student leadership at the University of Fort Hare have accused the campus-based ambulance service of failing Yonela Boli.
Image: SUPPLIED

Student leadership at the University of Fort Hare have accused the campus-based ambulance service of failing Yonela Boli, who died of a stab wound to the back on Saturday morning.

Alderson Ambulance COO Jason Leicester has denied allegations that the ambulance had been delayed, saying one had been dispatched within two minutes of the call coming through.

The university is investigating these claims.

Boli, who was doing a master’s in geology at the UFH’s Alice campus, died at Victoria Hospital outside Alice.

He was allegedly stabbed by a woman, believed to be his girlfriend.

“By the time it arrived, Yonela had already been taken to a hospital by a fellow student,” she said.

Sompa said she had received a call at about 3.30am that a student had been stabbed at one of the residences.

“Because the campus control is closer to my residence, I decided to go straight there instead of calling.

“I knocked; there was no response.

“I then called the central number and they said the ambulance was coming.”

A 24-year-old female student at the University of Fort Hare has been arrested in connection with the death of her “close friend”, a male student at ...
News
1 year ago

“They said they would send an ambulance that was closer to the campus.

“My understanding is that we have an ambulance stationed on campus for emergencies.

On Sunday, health spokesperson Sizwe Kupelo told the Daily Dispatch that when Boli arrived at the hospital at about 4.30am on Saturday he was still  bleeding.

Speaking on behalf of the university, dean of students Malinge Gqeba confirmed they were investigating the delay.

“The feedback we got from them was that, from their central tracking system, it was actually seven minutes from the time the call was made to the time the ambulance got there.”

Gqeba said they would also investigate if the ambulance had been on campus at the time it was called.

He said the university would meet Alderson Ambulance to look into the matter.

Leicester said the ambulance had been dispatched just two minutes after the call was received.

“Our control room received the emergency call at 3.47 and finished dispatching the medical crew at 3.49,” he said.

Leicester dismissed allegations the ambulance had been delayed.

“Without question there were no delays.

“Upon arrival, our crew were alerted that the patient had already left by private transport to a hospital,” Leicester said.

Meanwhile, Yolanda Nogemane made a brief appearance in the Alice magistrate’s court on a charge of murder.

Her case was postponed to Tuesday and she remains in custody.

Boli’s mother, No-Andile Boli, was too distraught to speak to the Dispatch on Monday afternoon.

Her sister, Gladys Kheswa, said No-Andile was still in shock struggling to come to terms with Yonela’s death.

“She hardly eats, she hardly talks. Yonela's father passed away when he was still young and his dream was to build a big house for his unemployed mother,” she said.