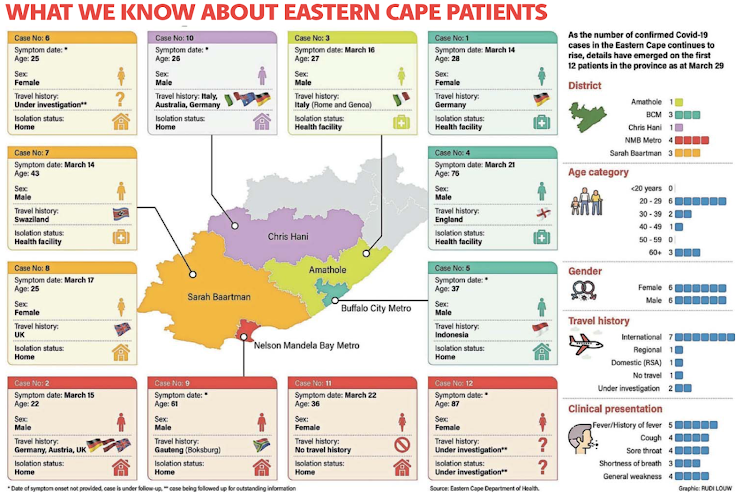 As a Port Elizabeth doctor and nurse tested positive for  Covid-19,  along with a woman quarantined at Livingstone Hospital, a clearer picture has emerged of where the first 12 recorded Eastern Cape patients lived, had travelled and with how many people they had interacted.

The 12 came into close physical contact with 128 people while showing symptoms of the respiratory disease caused by the coronavirus.

The provincial government has managed to trace 84 of these people, with the remaining 44 still being tracked down.

This comes as SA yesterday recorded two more Covid-19 deaths and the number of cases nationally climbed to 1,505 — an increase of 43 from Thursday night.

The overall death toll is officially at seven.

On Friday night, Eastern Cape premier Oscar Mabuyane said the number of  confirmed Covid-19 cases in the province stood at 17.

The details of the first 12 infected people in the province are contained in an Eastern Cape health department report.

Of the 84 people traced, 39 had already successfully finished a 14-day monitoring period, with 24 found to be living in Gauteng when they were contacted.

Provincial  health department spokesperson Siyanda Manana declined to comment on the report, saying it was a confidential document.

Overall, the Bay had eight people infected with the virus, according to Mabuyane.

Those most recently infected in the city were from Uitenhage, Zwide and Summerstrand, health  MEC Sindiswa Gomba said.

Gomba said Uitenhage had its first confirmed case — a 50-year-old woman who tested positive after going for a private test.

“The woman is now self-isolating,” she said.

“This is a nurse from Uitenhage who works at Dora Nginza Hospital who attended a funeral about two weeks ago that was attended by guests from all over the world.

“All staff who may have come into contact with the nurse will be tested.”

There were two other new cases in Port Elizabeth, including a man who had travelled to Australia and another man living in Summerstrand whose travel records are pending.

“There is an indication that the doctor travelled but he has not divulged that information to us yet,” she said.

Gomba also  disclosed that a 56-year-old retired nurse, who lives in Zwide, had been admitted to Livingstone Hospital after testing positive.

Butterworth Hospital management had to be called to the Kei Bridge roadblock on Thursday afternoon after a woman who had shown symptoms of Covid-19 ...
News
1 year ago

Meanwhile, within hours of the report on the first 12 people who tested positive being released, the provincial government ramped up Covid-19 testing to quickly identify people who may be infected — and aims to reach a target of 10,000 over the next two weeks.

The report, dated March 29, shows that the gender of the people was evenly spread, with six men and six women testing positive, and  their ages ranging from 22-87.

The 87-year-old woman lives in Port Elizabeth and tested positive with her travel history still under investigation by the department.

The youngest person listed is a 22-year-old man who also lives in the Bay.

He tested positive after visiting Austria, Germany and the UK.

The report states that he is in self-isolation at home.

Two other positive cases in the city are a 61-year-old man who recently travelled to Boksburg, east of Johannesburg,  and the other listed as a 36-year-old woman who had not left the Bay recently.

“The one case in Bluewater Bay was a close contact of a confirmed case and had [no] travel history either locally, regionally or internationally,” the report reads.

“This case may represent the first recorded person-to-person transmission in the province.”

The partial blockade at the Kei bridge has opened a market for at least one fraudster operating in the East London CBD. Police and the army have ...
News
1 year ago

Elanie received her results  on Saturday last week — a day after her father tested positive at a drive-through testing facility in Port Elizabeth the previous day.

Danie, who lives in Bluewater Bay, suffered from a fever and body aches before getting tested, while his daughter had a mild headache and minor irritation in her throat that affected her voice.

According to the report, the most common symptoms among the province’s confirmed cases were fevers, coughs, sore throats, shortness of breath and general weakness.

The first reported case in the Eastern Cape was a 28-year-old woman who had travelled to Germany, with her symptoms first showing on March 14.

Mercedes-Benz SA confirmed on March 21 that she was an employee of the company who had been in self-isolation since returning from Germany.

The report states that the woman was in isolation at a health facility in the province.

It emerged last weekend that three people living in the Sarah Baartman district had also contracted the virus — one case in Aberdeen, one in St Francis Bay and another in Paterson.

Two of them are women aged 25 and the third is a man aged 43. He travelled to Eswatini [Swaziland] while one of the women was abroad in the UK.

The other woman's travel history is still under investigation.

A 26-year-old man, who visited Italy, Australia and Germany, is in self-isolation in Komani.

The remaining two cases in Buffalo City is a 27-year-old woman and a 76-year-old man.

He travelled to England while she visited Italy.

In Amathole, a 27-year-old woman tested positive after returning from Italy.

She started showing symptoms on March 16.

Tracking the spread of the novel coronavirus
Next Article