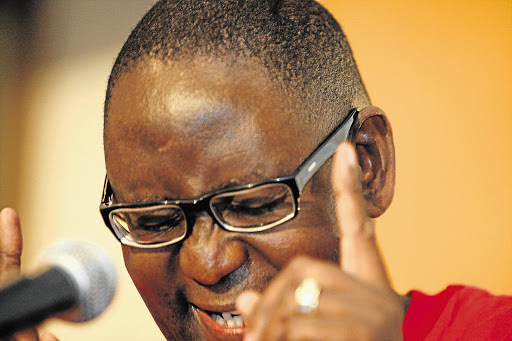 Zwelinzima Vavi, who is general secretary of Saftu, said he was optimistic the deadly virus would not take him down. File photo.
Image: KATHERINE MUICK-MERE

The general secretary of the SA Federation of Trade Unions (Saftu), Zwelinzima Vavi, thanked South Africans for their messages of support as he continues to fight Covid-19.

He shared two videos over the weekend, one in which he appeared to be heavily sweaty, saying he was optimistic the deadly virus would not take him down.

“Corona has finally met its match. It stands no chance. None whatsoever. It is going to be defeated and chased out of this body. It will fall,” he said in a viral video.

On Sunday he complained about a heavy chest and lungs, and said he would have this checked by his doctors.

“They will check my levels of oxygen, I think I will be fine thereafter. I just need a lot of rest.”

Watch both his videos below:

#coronavirus - never give up! The fight is on! pic.twitter.com/9oKJEkTfab

Here's a glimpse of the well wishes for Vavi:

my prayer for zwelinzima Vavi

Yoooh Baba Zwelinzima Vavi may God help you defeat this. 😩💔

I salute you for your open and public approach to your diagnosis and illness. Leadership! Forward to recovery, phambili! 👊👊👊