Peace for rhinos as lockdown keeps poachers away – for now 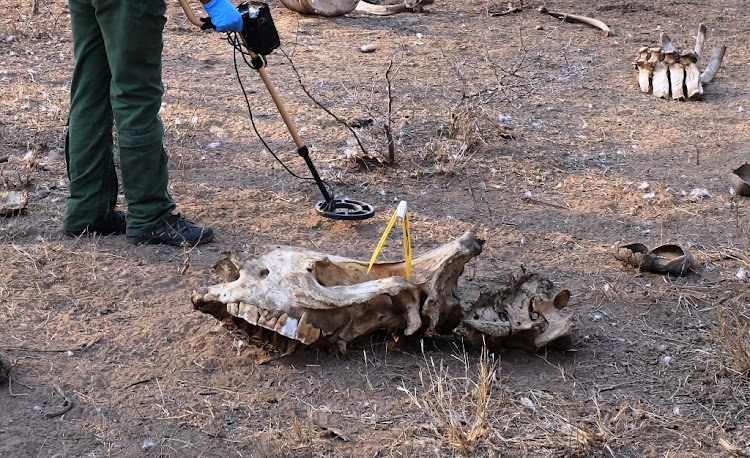 RHINO CSI An investigator searches for the bullet at a rhino poaching crime scene in the Kruger National Park.
Image: Paul Ash

SA’s rhinos and other vulnerable wildlife could enjoy a rare moment of peace as the 21-day lockdown stops poachers in their tracks.

With people confined to their homes and police and army vehicles patrolling the country’s roads, poachers will find it difficult if not impossible to carry on their business, say conservation experts.

Jooste said all national park security teams were fully operational, and noted that there had been no increase in poaching incidents since the lockdown began.

“It may be safer in the bush than anywhere else,” he said. “Maybe this [poaching] curve is flattening.”

Private game reserve owners agreed that the increased army and police presence across the country would deter poachers.

Some elephants are better at social distancing than others, prides of lions are useless, especially at mealtimes, and giraffes are fickle, moving ...
Lifestyle
2 years ago

It may be safer in the bush than anywhere else.

Derek Lewitton, owner of a private rhino reserve in Limpopo, said the lockdown rules, such as only two people being allowed in a car at one time, would make it impossible for poachers to operate.

“To poach requires a team of three or four guys who go in on foot, plus a driver,” he said. “Four men driving around at night on roads that are empty would be a high-risk endeavour. You can’t drive without lights because of all the roaming cattle. And if there’s a shot, somebody’s going to hear it.”

Lewitton said the reserve was completely locked down and being patrolled by a full complement of game guards.

“We haven’t dropped our guard at all,” he said.

Any poachers who managed to evade the security patrols would then have to locate in the rhino in 3,000ha bush that has grown thick after good summer rains.

Pelham Jones, chairperson of the Private Rhino Owners’ Association (PROA), said the global travel ban that preceded SA’s lockdown would already have helped ease the pressure on rhinos and other vulnerable species.

“With the shutdown, the ability of poaching syndicates and smugglers is severely inhibited,” he said.

Jones cautioned, however, that the lockdown was only a week old and that it was still too soon to determine what the overall effect would be on poaching statistics.

The department of environment, forestry and fisheries said on Monday that 594 rhino were poached nationally in 2019 - down from 769 rhino in in 2018 ...
News
2 years ago

With the shutdown, the ability of poaching syndicates and smugglers is severely inhibited.

A bigger worry was what would happen when the coronavirus crisis was over, leaving a devastated local economy and people desperate to earn cash or bring protein home to their families.

“I anticipate a substantive increase in poaching and the abuse of natural resources,” he said.

Les Carlisle, group conservation manager for wildlife tourism company and lodge operator andBeyond said all security staff were in place at its camps and reserves. Vehicles were out on patrols, while all the usual protocols, such as social distancing and sanitised food deliveries to anti-poaching patrols, were being observed.

andBeyond, which operates 29 lodges in seven southern African countries, had closed all its camps to travellers in just 10 days.

And the local communities that had benefited from the company’s investment into a sustainable development conservation model would offer an extra layer of security, Carlisle said.

“More people are at home now,” he said, “and there are more eyes and ears to pick up illegal activity.”

Where there’s weakness, there is a greater risk it will be exploited.

“People depend on wildlife,” Carlisle said. “It’s at times like these that you really see the benefit of those investments.”

Although things are quiet for now, full moon, when poachers are usually most active, is still a week away.

Conservation economist Michael 't Sas-Rolfes said poaching would probably increase in the event of a chaotic end to the lockdown.

“It will probably be site-specific,” he said. “Where there’s weakness, there is a greater risk it will be exploited.”