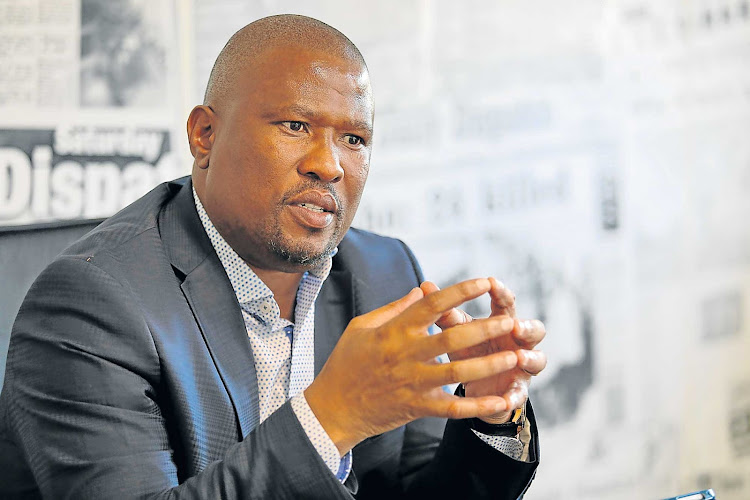 Oscar Mabuyane insists there is no evidence of wrongdoing in using a lodge owned by Kwakhanya Tikana, 26, the daughter of ANC MEC for transport Weziwe Tikana-Gxothiwe, for purposes of quarantining people who are positive for Covid-19.
Image: SIBONGILE NGALWA

A politically connected Eastern Cape businesswoman’s lodge was apparently handpicked and used as a quarantine facility for people who had tested positive for Covid-19 in Cacadu.

Fourteen people confirmed to be infected with the coronavirus were moved to Mioca Lodge in Cala on Wednesday before they were hastily moved to a local hospital on Friday, just hours after the Daily Dispatch questioned the provincial government about processes followed.

Mioca Lodge is owned by Kwakhanya Tikana, 26, the daughter of ANC heavyweight Weziwe Tikana-Gxothiwe, who is the transport MEC and ANC Women’s League deputy secretary-general.

Chris Hani district had 21 confirmed cases of the novel virus on Friday.

When they were moved to Mioca Lodge, normal procurement processes were allegedly not followed with residents, insiders and UDM leader Bantu Holomisa described the move as “brazen corruption”.

However, premier Oscar Mabuyane dismissed that, saying there was no evidence of any wrongdoing.

“While any person has a right to question processes and decisions of government, we must guard against making unfounded and baseless accusations against any individual with no proof and evidence to support such claims.

“Everything done by government is and must continue to be according to laws and regulations aimed at preventing wrong, irregular and corrupt practices. We will continue making sure that everything we do is above board,” he said.

Mabuyane blasted B&B owners who he said had refused to have their establishments used as self-isolation and quarantine facilities, saying that was unpatriotic.

Mabuyane did not say how much ratepayers had forked out for the three day to Mioca lodge.

However, Tikana said everything had been done above board.

“Mioca B&B is indeed my company.

“As long as nothing illegal or untoward was done I think these allegations are unfortunate.

“Unfortunately I am not privy to information on how the state procures goods or service in this instance.

“I am an adult who has to make a living and I chose to run a private business to sustain myself.

“My mother has nothing to do with Mioca.

“But as required by law, the MEC has declared [and] submitted a declaration form to the legislature which can be freely checked,” she said.

Tikana would not say how much she had been paid.

“That you will have to check with the state.

“I am running a business and the contract I have with my client is between me and the client.

“Fortunately, since the state can freely declare such information as required by law, they are better positioned to answer this one,” she said.

Initially, Holomisa had tweeted that Mioca was owned by Tikana-Gxothiwe, but a company search proved it was her daughter’s.

The MEC said: “I don’t own a B&B. I’m MEC of transport and so have no idea of processes which are being followed when the government has to quarantine people.

My declaration form is with the legislature, and everyone has the right to ask for it and check what I have declared. I am not doing business with the state

“My declaration form is with the legislature, and everyone has the right to ask for it and check what I have declared.

“I am not doing business with the state.”

Holomisa, who punts himself as a corruption buster, said Bhisho should not have appointed Tikana.

“It is a clear conflict of interest for the MEC and her family to benefit from doing business with the state.

“We do not know the steps that were taken to ensure the treatment of those patients at that B&B,

“Oscar Mabuyane should know that this is a clear conflict of interest.

“It is sad that nothing positive comes out of the province when it involves money,” he said, adding that one worker allegedly abandoned his duties when the 14 were moved to the facility because he feared for his safety.

A government insider agreed with Holomisa, saying: “This is becoming similar to the Mandela funeral scandal.”

Cala University Student Association member Fani Ncapayi claimed health workers at the facility were in the dark about the patients.

Of all places they chose Cala which is underdeveloped as is. What happens if the virus gets out of that B&B

He said: “Of all places they chose Cala which is underdeveloped as is. What happens if the virus gets out of that B&B?

“We do not know what measures they have put in place to make sure those people don’t spread this.”

Health MEC Sindiswa Gomba had earlier told the Dispatch at a news conference that she was surprised when she heard the patients had been moved to the facility.

She said she had heard about the MEC’s daughter’s B&B being used as a quarantine site “probably around the same time” the Dispatch heard about it.

“The only thing that got through to me was a call from the [Emalahleni] mayor [Ntombizanele Koni], who said they have a [funeral] issue similar to Port Elizabeth and Port St Johns, and that out of that there are people who tested positive.

She said she had explained to Koni that people who should be quarantined were those who should be isolated and tested to ensure that they were not infected.

“When I called back to check on the issue, I found out there was a gap in terms of understanding in that district as to how they would deal with such an issue.

“The next I know is that people had already been picked up.”

Koni said public works MEC Babalo Madikizela had approved that the patients be quarantined at Mioca “after several B & in the area refused to quarantine coronavirus patients”. — Additional reporting by Soyiso Maliti