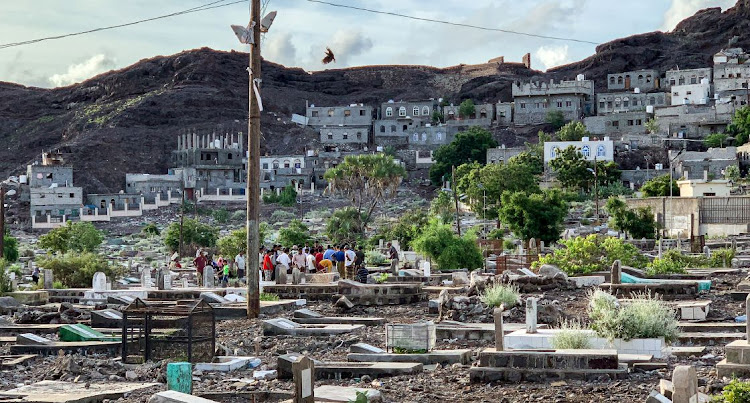 People perform a burial at the Qutay cemetery in the Crater district of Yemen’s southern coastal city of Aden on Tuesday last week. Covid-19 is reportedly spreading fast in the war-ravaged country whose healthcare system has been blighted by years of conflict.
Image: AFP/ SALEH AL-OBEIDI

Yemeni authorities declared Aden, interim seat of the Saudi-backed government, an “infested” city on Monday after the number of coronavirus cases there jumped and clashes erupted elsewhere in the south between separatists and government forces.

A five-year war has shattered Yemen’s health system, pushed millions to the brink of famine and divided the country between the internationally recognised government and the Houthi group that ousted it from power in the capital, Sanaa, in late 2014.

The World Health Organisation (WHO) says there is full-blown transmission of the virus in Yemen, with the disease spreading undetected among a population with some of the lowest levels of immunity to disease compared with other states.

Testing capabilities are inadequate but the WHO has urged local authorities to transparently report confirmed cases.

The Aden-based national coronavirus committee late on Sunday announced 17 new Covid-19 cases, 10 of them in the southern port city, to raise the total count in areas under the Saudi-backed government’s control to 51 with eight deaths.

The Iran-aligned Houthi movement, which controls Sanaa and most large urban centres, has reported two cases, with one death.

The Aden-based government has accused Houthi authorities of covering up an outbreak in Sanaa, an accusation they deny.

The committee said Aden had been declared an “infested city” due to the spread of the coronavirus and other diseases already rife in the country after recent flooding.

It said movement from Aden to other regions was barred, except for transport of goods.

“The administrative and political situation in Aden is also hampering efforts to combat the coronavirus and this should be remedied so relevant entities can carry out their duties,” the committee said on its Twitter account.

The separatist Southern Transitional Council declared self-rule in Aden and other southern regions on April 25, threatening to renew a conflict with the Saudi-backed government in Yemen’s multifaceted war.

The council and the government of Abd-Rabbu Mansour Hadi are both part of the anti-Houthi coalition led by Saudi Arabia, but they clashed in 2019 until Riyadh brokered a deal in November.

The council said its fighters were attacked by government forces.

There was no immediate comment from the Hadi government.

The Western-backed coalition intervened in March 2015 to restore Hadi’s government to power in Sanaa, but the conflict, largely seen as a proxy war between Saudi Arabia and Iran, has been in stalemate for years.

The coalition on April 24 extended by one month a nationwide ceasefire prompted by the coronavirus outbreak as the UN seeks to hold virtual talks to agree a permanent truce, co-ordinate coronavirus-combating efforts and restart peace talks.

The Houthis, who say they are fighting a corrupt system, have not formally accepted the truce though violence has abated.

The WHO ordered a pause in staff activity in main Houthi-held areas late on Saturday, citing “credible threats” to staff, but reversed the directive on Sunday, according to a document confirmed by the organisation.

The suspension was prompted by accusations from Houthi officials that the first coronavirus case announced in Sanaa, a Somali man found dead in a hotel, was brought to the capital by the WHO.

A Houthi official on Sunday tweeted a retraction.

The UN on Sunday voiced concern that migrants are being stigmatised as “transmitters of disease”, saying in a statement that some have been forced to move to front lines and desert areas with no essential services.

Yemen has long been a transit point for migrants and refugees from the Horn of Africa trying to reach Gulf states. — Reuters