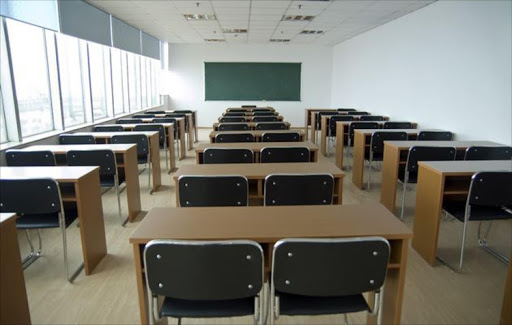 More than 5,000 schools in the Covid-19 hot spots across SA, including 929 private schools, will stay shut next month if the cabinet approves a new proposal by the basic education department.
Image: Gallo Images/Thinkstock

Thousands of pupils attending schools in Buffalo City and Nelson Mandela Bay metros, areas regarded as Covid-19 hotspots in the province, may remain at home instead of returning to class on June 1 when other schools are set to open.

This is if the cabinet approves a new proposal by the basic education department.

The Dispatch's sister publication, Sunday Times, reported at the weekend that the education department wants schools in BCM, Cape Town, Johannesburg, Ekurhuleni, eThekwini, Mangaung and Nelson Mandela Bay to be regarded as being on lockdown level 5 when others around the country begin reopening on June 1.

This will mean that more than 5,000 schools in these Covid-19 hot spots across SA, including 929 private schools, will stay shut next month if the cabinet approves a new proposal by the basic education department.

Keeping these schools shut would affect 3.7 million pupils and 134,779 teachers, according to a report leaked to the Sunday Times.

The proposal — discussed on Wednesday with the National Alliance of Independent Schools Associations (Naisa), which represents nine private schools' associations — is expected to be unveiled when basic education minister Angie Motshekga briefs the media on Monday about how ready the provinces are to reopen schools.

Circulars show that in some provinces schools have been instructed to buy personal protection equipment with funds originally meant for learning materials, while parents have been roped in to help with cleaning.

The document outlining the department's proposals suggests that all 157,123 matric pupils in hot-spot areas "be accommodated in Grade 12 special camps".

Schools in areas where Covid-19 infections are lower will be listed under lockdown level 3. Grades 7 and 12 will resume on June 1, with grades R to 6 and Grade 11 expected to return on a staggered timetable. Pupils in the remaining grades will return once lockdown level 2 begins.

The proposal says that under level 3, the school timetable could be rearranged to "accommodate different grades attending school on alternate days as well as platooning/shift arrangements to comply with physical distancing".

On May 12 the education department revealed plans focusing on a phased-in approach to resuming teaching and learning, prioritising grades 7 to 12, with Grade R being the last to return to class.

Education minister has many problems, but her address to the nation on reopening schools can be delayed no longer
News
1 year ago

Vuyiseka Mboxela, a spokesperson for education MEC Fundile Gade, said provision of personal protective equipment, redesigning learner's desks and provision of psychosocial support to both learners and teachers were among the reopening plans.

The proposal said under level 3, the school timetable could be rearranged to "accommodate different grades attending school on alternate days as well as platooning/shift arrangements to comply with social distancing".

But on Sunday Gade said whether schools will reopen, and in phases or not, will depend on a decision that will be taken in Motshekga's meeting on Monday.

“It is in  that meeting tomorrow that a national decision can be taken as to declare which areas are regarded as hotspots that should go back to level 5 or remain in Level 4.

"In principle, there is that discussion [to open schools in phases] but there is no formal pronouncement on it. Hence I am saying they are pre-empting the decision of the CEM (Council Of Education Ministries) that is sitting tomorrow".

Gade said he has not seen the Sunday Times report and he “will only get that report tomorrow morning”.

Provinces ‘need more time’ on the reopening of schools

Basic education minister Angie Motshekga is expected to convene a meeting to consider the progress made towards the reopening of schools across the ...
News
1 year ago

National Professional Teachers Union of South Africa chairperson Basil Manuel said his union was unhappy with the idea that certain schools will reopen and others stay shut.

“It is a difficult one because we always advocated for all schools to open but we also find it difficult to make arguments with the science that with infection rate very high in those areas, it may not make sense to re-open,” said Manuel.

He said closing some areas because they were hotspots was not the solution because there were instances where pupils from hotspots may attend school in areas with a low rate of infection.

“We are not located in a fixed zone, people travel in between zones, teachers as well as learners.

"Once it makes sense that we cannot open schools in one area if there are too many infections, in two weeks time things might be very different and all these plans to not open will fall down."