Push for Mabuyane to act against transport MEC 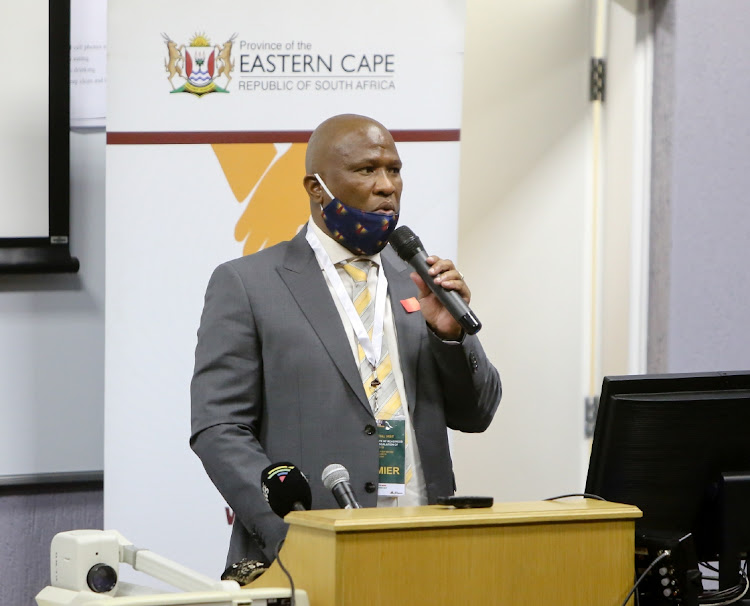 Eastern Cape premier Oscar Mabuyane has been backed into a corner, with calls for him to act against transport MEC Weziwe Tikana-Gxothiwe with regard to the use of a lodge owned by her daughter as a quarantine facility.

The patients were moved elsewhere following an outcry when the story first broke last month.

In a scathing letter to Mabuyane on Friday, UDM president Bantu Holomisa demanded answers about the provincial government’s use of  the Mioca Lodge, owned by Tikana-Gxothiwe’s daughter, Kwakhanya Tikana, to quarantine 14 patients in Cala.

His views were shared by the ANC Youth League in OR Tambo, which has  told Mabuyane to place Tikana-Gxothiwe on special leave pending a corruption investigation into her department.

Holomisa’s letter follows a tweet he posted on April 16 regarding the use of the lodge.

Holomisa said on Sunday that legal papers arrived at his office on Friday, demanding that he withdraw the statements he had made on Twitter in April.

“In April, she [Tikana-Gxothiwe] filed a defamation lawsuit against me, [demanding] that I apologise and pay her R500,000.

“She withdrew the case [later],” he said.

Holomisa said he intended to defend himself in court.

His tweet on April 16 read:  "#ComradesInCorruption are at it again.

Transport MEC Weziwe Tikana-Gxothiwe is pursuing legal action against anyone who has tainted her name — and now she has set her sights on UDM leader ...
News
2 years ago

“This lodge is owned by MEC Weziwe Tikana-Gxothiwe. Makagxothwe! [loosely translated: she must be fired]”.

In his letter to Mabuyane, Holomisa said: “The public, by this time, would justifiably have expected you to have an inquiry into the entire affair, together with a forensic audit, to answer some of the above questions.

“However, since you have not done so, it has resulted in some people, like me, being threatened with legal action, with attempts being made to gag me, while there are legitimate and serious questions that require exhaustive answers.”

Tikana-Gxothiwe denied having any shares or interest in the lodge, saying it was owned by her daughter, while health MEC Sindiswa Gomba denied any knowledge of the patients being placed there.

Transport, safety & liaison MEC Weziwe Tikana-Gxothiwe has hired a private investigator to clear her name of allegations that she is behind the ...
News
2 years ago

Tikana-Gxothiwe’s spokesperson, Unathi Binqose, confirmed that Tikana-Gxothiwe was seeking legal advice, with the intention of taking further legal action against Holomisa and anyone else who sought to tarnish her name.

“The engagement with law experts is at an advanced stage,” Binqose said.

In his letter to Mabuyane, Holomisa asks, among other things:

Provincial Treasury will conduct a forensic probe into the provincial department of transport following allegations of improper procurement and ...
News
2 years ago

United Front provincial executive member Lungile Mxube said on social media on Saturday that he had also received court papers alleging that he had made defamatory remarks about Tikana-Gxothiwe.

Holomisa wrote in the letter that when the Mioca Lodge was registered as a business, Tikana-Gxothiwe’s daughter would have been 21.

He questioned where she had obtained the large amount of money needed to renovate the property and turn it into an accommodation space.

“He will not publish the copy of the responding letter on social media but will send it to his office and directly to him.

“The premier has been informed that this matter is going to court and his view is that Holomisa must engage that process to prove the claims he made against Tikana-Gxothiwe in a court of law,” Sicwetsha said.

The ANCYL in OR Tambo and the United Front’s Mxube have called on Mabuyane to place Tikana-Gxothiwe on special leave while allegations of corruption in her department are investigated.

ANCYL task team co-ordinator Nkoliso Mbaleki called on Mabuyane to lead the province ethically and honestly and asked that all those implicated in a Public Service Commission report on Tikana-Gxothiwe’s department in November be placed on leave.

The report made findings and recommendations on the alleged irregular appointment of staff, consultants and contractors in the Eastern Cape transport department.

OPINION | Mabuyane must be firm on Covid-19 procurement

It was only ever going to be just a matter of time before the worst instincts of some of our compatriots came to the fore, as they explored how they ...
News
2 years ago

In a statement, Mbaleki wrote: “The issue involving MEC of transport Weziwe Tikana-Gxothiwe remains a ticking bomb that could end up tainting all this good work done by the collective leadership of the province.

“The allegations of corruption levelled against the MEC are very strong and they demand serious and timely attention from the office of the premier.”

Mbaleki said Tikana-Gxothiwe's  presence in the department created a legal conundrum because as an accused, she could not compose a team to investigate her own actions.

“We urge the premier to take a bold step and allow the MEC to go to rest and have a cool-off period pending the investigation process, to give space to investigators to do their work without fear of interference,” Mbaleki said.

“We call upon the premier to act decisively by recalling the MEC until all inappropriate matters raised in her name have been addressed satisfactorily.”

Meanwhile, the ANCYL in Amathole district municipality threw its weight behind Tikana-Gxothiwe and said she should not be concerned by gossip.

“We have seen gossip mongers isolating the MEC of transport, painting her as a corrupt individual.

“We do not get how the MEC of transport is implicated in a process which involves the department of health and public works.

“Furthermore, we understand the B&B to be owned by her daughter, who has a right to do business like any other citizen of our country,” Silo said.

On calls for Tikana-Gxothiwe to be placed on special leave, Binqose said this was not justified.

Outcry grows over use of Cala lodge to isolate virus patients

South Africans need to be focused and unified on defeating the coronavirus pandemic, and cannot afford to be sidetracked by unnecessary ...
News
2 years ago

He said the MEC had come out publicly and personally to welcome a forensic probe, pledging that the department would co-operate fully.

“Therefore calls for her to take special leave have no basis and [are] unjustified at a time when the province needs all hands on deck to fight off the spread of Covid-19, and the MEC has been at the forefront of that fight,” Binqose said.

Sicwetsha said Mabuyane had appointed a team from the provincial Treasury department to investigate the allegations of impropriety made against the department of transport.

Sicwetsha said the team was not appointed by Tikana-Gxothiwe as claimed in the ANCYL’s statement.

“There is no real evidence supporting their claims that the investigation was frustrated by the department.

“The investigating team from the provincial treasury will submit its report to the premier after concluding the investigation.

“The premier will act decisively [against] proof of wrongdoing by any individual.”

A politically connected Eastern Cape businesswoman’s lodge was apparently handpicked and used as a quarantine facility for people who had tested ...
News
2 years ago

Premier Oscar Mabuyane came out guns blazing on Friday afternoon accusing some bed and breakfast owners of refusing to have their establishments as ...
Politics
2 years ago

Were processes followed when EC MEC's daughter's lodge was used as a quarantine facility?

Questions have been asked as to how the Eastern Cape government used a lodge owned by the daughter of transport MEC Weziwe Tikana-Gxothiwe as a ...
Politics
2 years ago