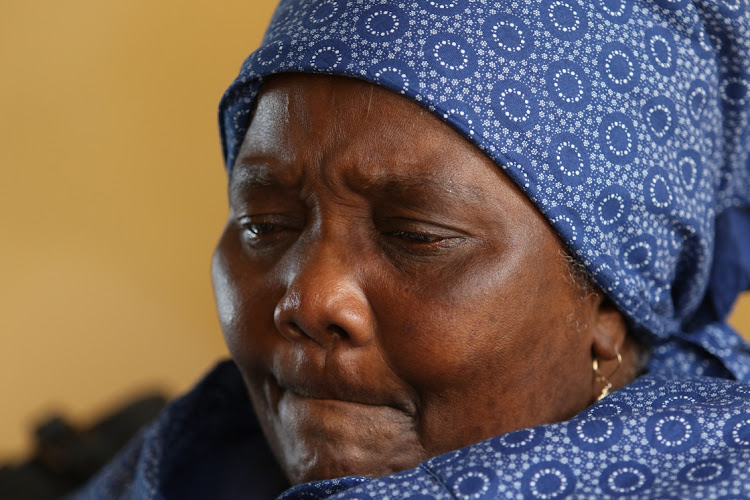 Widow Thobeka Makalima they could not find her husband's grave.
Image: MICHAEL PINYANA

An East London family has been left puzzled by the “disappearance'' of a loved one laid to rest at the Cambridge cemetery last month.

Thembekile Makalima, 66, was buried on May 8 but family claim his body has since gone missing. His wife and children went to visit the grave two weeks ago to install a tombstone, but they say it was nowhere to be found.

Widow Thobeka Makalima said they immediately approached Buffalo City Metro (BCM) workers but, despite opening three graves, they could not find the one belonging to her husband. Cambridge police confirmed the matter was reported to them.

“I am begging the [metro] officials to tell me where is the corpse of my late husband. They’ve removed him from the grave and where is he? How am I going to tell his elderly relatives that his corpse is missing?”

Thobeka said the matter was taking its toll on the family.

Makalima died on April 25 after being sick for two years. The family said because of Covid-19 regulations and restrictions, only family members attended the funeral. They said immediately after the burial ceremony, they had to leave the site, and were told municipal workers would be responsible for closing up and marking the grave.

His daughter Vuyokazi Makalima said: “On the day of his burial [May 8], we could not erect his tombstone as we would have done before Covid-19 regulations. We came back two weeks later, on May 21, and went to where he was buried. The municipality officials told us we were confused and we did not know where he was buried, but we were adamant we knew where we buried him.”

The family went straight to where Makalima had been buried, but workers told them it was not his grave. The family insisted it was the right grave, even video-calling a relative to confirm it. Workers were then said to have dug up the grave and two others, but Makalima’s casket was not in any of them. DispatchLIVE has seen pictures of the excavations.

That was when the Makalimas approached the police.

Cambridge police spokesperson Captain Mluleki Mbi said the family was advised to approach the metro’s health department to apply for an exhumation permit.

The family said they had not had any help from BCM.

The tombstone of ANC struggle stalwart Mxolisi “Slumber” Jayiya, barely a month old, has been desecrated at the Cambridge cemetery in East London in ...
News
1 year ago

BCM spokesperson Samkelo Ngwenya confirmed there was a dispute between the Makalima family and the cemeteries & crematorium department. “The department did its best to assist by also involving the undertaker who conducted the burial, but the family was still not convinced that the grave they were shown was theirs. They were then advised to apply for an exhumation through the department of health to dig the grave for verification,” said Ngwenya.

The deceased’s son, Mwelase, said this was a painful experience for his family, especially his elderly mother. “We are still mourning the death of our father and this is happening to us. My mother is hurting. We are in pain yet there is no one to care for us,” he said.

Vuyokazi said they would escalate the complaint if her father’s remains were not found.

“This is traumatic. Whoever has done this must rot in jail. How many graves are  these people switching without the families knowing? Have they told the families of these dead people that they will tamper with their graves to search for our father? No.”