The man who kicked off the 2010 World Cup 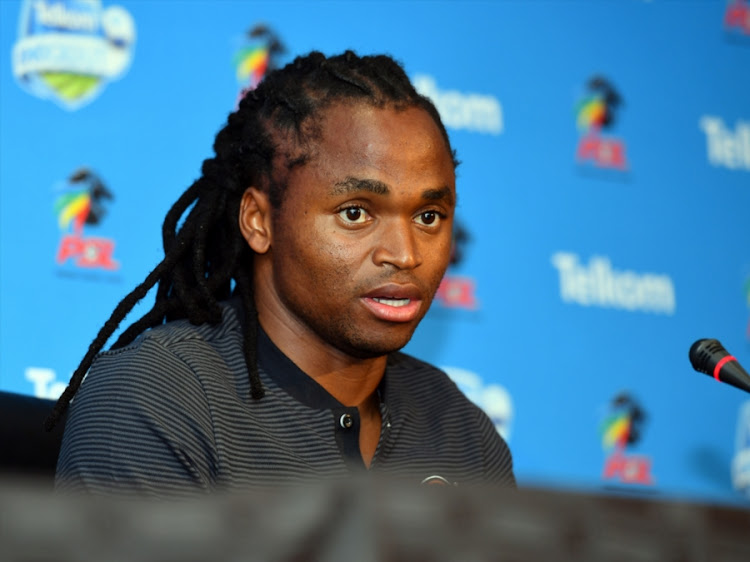 Now 35, Siphiwe Tshabalala hasn’t hung up his boots just yet - but when he does he will go down as an inspirational figure who lit the first spark of the 2010 Fifa World Cup.
Image: Johan Rynners/Gallo Images

The naked eye didn’t see it, nor did the 34 high-definition cameras that captured every second of that match, along with the numerous photographers able to freeze moments down to a millisecond. But the man who lived it swears it happened.

For a moment, Siphiwe Tshabalala was alone with his thoughts while thousands at Soccer City, millions across the country and more than a billion viewers worldwide were in awe of his brilliant goal in the opening match of the 2010 Fifa World Cup between Bafana Bafana and Mexico on 11 June.

But there was no pause from the moment he received a well-threaded pass from Kagisho Dikgacoi to when he controlled the ball before unleashing a thunderbolt from an awkward angle, lighting up the first World Cup played on African soil.

The man who lifted the nation to its feet scoring the magnificent opening goal of the 2010 Fifa World Cup for Bafana Bafana has turned his attention ...
Sport
1 year ago

There was no pause moments later, when he ran to celebrate with his teammates, regroup and then resume the match that ended in a disappointing 1-1 draw for the hosts.

“Tjo! I get goosebumps when I think about that goal or see it being replayed,” said an animated Tshabalala in a phone interview with New Frame.

“It was a big occasion. The world was watching and I was able to rise to the occasion. I am proud that I was able to score a beautiful goal that is on the history books of not only South African football, but world football.

As soon as the ball left my foot, I knew it was going in. Everything about it was perfect.

“As soon as the ball left my foot, I knew it was going in. Everything about it was perfect. It was just a surreal moment. It took me back to when I was a kid, the joy I had when I played football. When I was a kid, I used to dream about scoring important goals. Whenever we would score, we would run around and celebrate while cheering for ourselves.”

That afternoon, the whole continent and many parts of the world (except for Mexico) cheered for Tshabalala when he scored the goal that officially opened the 2010 World Cup.

The image of him in full flight with hands outstretched after beating a dejected Óscar Pérez, who was left sprawled on the ground, is one of three iconic pictures in a career that saw Tshabalala win every trophy on offer in the country, make the most appearances in the Soweto Derby between rivals Kaizer Chiefs and Orlando Pirates, and become the third most capped Bafana Bafana player of all time.

The most iconic photograph of the former Chiefs captain is of him clad in red and white, the same colours he would wear at his first professional club, Free State Stars. In the picture his hair is “greyish”, inspired by Amakhosi legend Jabu Mahlangu. Tshabalala is wearing white gloves and oversized boots that he borrowed from a friend. The photo was taken in the early 2000s, when Tshabalala was playing amateur football for the Phiri Red Lions of Soweto.

#tbt back in 2000/01 playing for Phiri Red Lions at Mando’s tournament in Phiri,those boots with plasters in front that I’m wearing were one size bigger and I borrowed them from a friend for the finals,Ok the gloves were mine😂The greyish hair was inspired by @jabumahlangu12 when he was still playing for @kcfcofficial.I played with/against the best football players at amateur/professional level,some didn’t make it and some did.Im grateful that God chose me.I encountered so many challenges on my journey but I never gave up🙏🏾And as they say:The Rest Is....

“I like that picture because it gives me an opportunity to look back at where I come from, what I had to overcome to reach my goals and where I am in life,” said Tshabalala. “It’s good to do some introspection. Even though I am proud of what I have achieved, I don’t take anything for granted. It started obhuqwini [in the gravel] and I eventually reached my dream.

“During those days I pictured myself playing in front of thousands of fans at the highest level. I visualised many things there, and to sit back now and say that I achieved everything I set out to do is amazing.”

The one disappointment that Tshabalala can’t shake is how Bafana performed at that World Cup, becoming the first host nation to crash out in the group stage of the global showpiece.

There was a lot of money invested to ensure that didn’t happen, including bringing in 1994 World Cup-winning coach Carlos Alberto Parreira to sprinkle some of the magic that helped Seleção conquer the world in the United States. The entire country backed Bafana, with the green and gold everywhere in South Africa during the month-long celebrations. Football Fridays made the Bafana jersey a uniform.

But schoolboy errors and not being ruthless enough saw them finish third in a group that also had Uruguay and an erratic French team that imploded, resulting in a parliamentary inquiry into what happened in South Africa.

“There were a lot of expectations for us to do well,” said Tshabalala. “We took that in our stride because the whole country supported us. We were determined to advance to the next round, but it wasn’t the case.

“We made minor mistakes that cost us dearly at the end. That was the difference between us going into the knockout stage and being eliminated in the group stage. We should have won the first game, but we didn’t take our chances. When we got the red card against Uruguay [Itumeleng Khune was sent off], it made our job even harder and we struggled to cope. We did well against France, but then our fate wasn’t entirely in our hands. It was disappointing to not go far.”

The making of a legend

The other iconic Tshabalala picture was taken in 2005. In it he is also wearing red and white, but this time he is a professional footballer for Ea Lla Koto. When this photo was taken, he was representing a Premier Soccer League XI that was facing Bafana Bafana. The national team were preparing for the 2006 Africa Cup of Nations, and his performance that day earned him a ticket to Egypt with them for the tournament.

“But for me, what matters the most is not what you have achieved, the trophies you have won or the money you have made, it’s the lives you have touched. I am proud of my legacy and the people I have inspired.”

Tshabalala’s dreadlocks, which made him easy to pick out in a crowd, his friendly nature and being a consummate professional made him a cult figure at Chiefs - even before that goal. He has always been a popular figure on the continent when travelling with Bafana. His status grew tenfold after the World Cup.

Benni McCarthy has slammed the SA Football Association (Safa) for ultimately having failed to capitalise on the legacy of South Africa hosting the ...
Sport
1 year ago

“The love I received from the continent made me feel good,” said Tshabalala. “I remember before the World Cup when we went to Sierra Leone, there were a lot of people who wanted to take pictures with me. This is a team that also had Mbazo [Mokoena] and [Steven] Pienaar, who were playing in England. I also received a lot of love in Nigeria.”

Even the children of his rivals fell in love with Tshabalala. Jeremy Brockie’s kids were captured on video chanting Tshabalala’s name during a match in which their father was on the opposing team. “They sent me that video,” Tshabalala said laughing. “I met the family when we were on holiday in Mauritius and I was very happy to see them.”

The 35-year-old hasn’t hung up his boots just yet - although he has taken a break from the beautiful game after he and the management of Turkish side Erzurumspor failed to reach an agreement on his new contract following the club’s relegation in May last year.

When he does eventually hang up his boots, Tshabalala will go down as an inspirational figure who carried himself with respect and professionalism, and he’ll be remembered fondly as the man who lit the first spark of the 2010 Fifa World Cup.

“The main thing in realising your dreams is knowing what is it that you want as a person, and what you need to do to achieve that,” said Tshabalala. “But over and above that, what is important is what legacy you leave behind. What impact have you made on people’s lives? That’s more important than any trophy because it will last for an eternity.

“I knew that the more my status grew, people would view me as a role model. I tried my best to be a good role model and lead by example. That doesn’t mean that I am perfect. We all make mistakes. But I am proud of what I did, achieved and the people I touched. The work still continues.”

This article was first published by New Frame