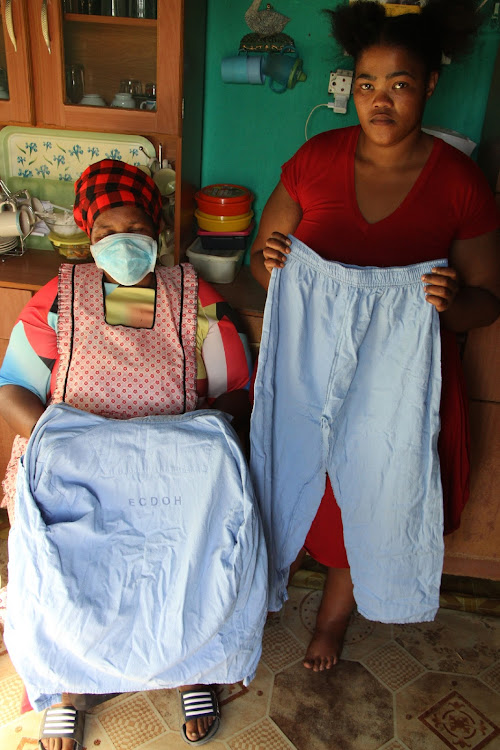 Notiti Xhosana and her daughter Vuyolwethu with the hospital clothes they received from Komga Hospital after her son Anele died of suspected Covid-19 virus. Notiti says she's still not sure what killed her son, who was suffering from TB.
Image: BONGANI FUZILE

Two families are filled with heartache and unanswered questions about the deaths of their loved ones.

A young Komga man who died from a suspected Covid-19 related illness was buried last week without his fingerprints even being taken by health officials, and the relatives of a nurse from Peddie are mystified as to the cause of her death.

Komga Hospital staff “were unaware about the procedures” when taking fingerprints from a person believed to have died from the virus.

Anele Xhosana, 26, was admitted at Komga Hospital in May. He had TB but was treated in the hospital which is also taking care of Covid-19 patients.

According to Xhosana’s family,  staff away took the clothes he had been wearing in hospital and gave them to the  family to launder.

“Anele was diagnosed as a person who was suffering from TB by the local clinic and was referred to the hospital so that they could check.

“Komga Hospital told us he was going to be taken to Nkqubela TB hospital in Mdantsane, but that never happened,” Notiti said.

She said her son was with Covid-19 patients for days.

“He had no Covid-19 when he went in. He was suffering from TB and they kept him for more than five days in this Covid-19 hospital while they were waiting for him to go to the TB hospital. He was with Covid-19 patients and we were not allowed to see him.

Notiti accused the nurses of failing to perform their duties properly.

“They [allegedly] could not take fingerprints from his body as they were afraid this would affect them.

“They even sent the hospital clothes he was wearing to wash. What if they had the virus on them?”

She said the hospital knew her son did not belong there.

“They [as good as] killed my son. My son belonged in a TB hospital, not a Covid-19 hospital.”

Xhosana’s sister, Vuyolwethu, said it had been a struggle to get co-operation from the hospital.

“We sent food for him to eat. We wanted to be next to him to feed him and care for him, but we were not allowed in because it is a Covid-19 hospital,” she said.

“Despite the healthcare workers knowing the procedures, they say they forgot to take the dead person’s fingerprints.

“That still haunts us. They [allegedly] did not want to touch his body or even the clothes he was wearing.”

She said the nurses at the hospital had written a letter to the funeral parlour to apologise.

The Covid-19 death toll at the Roman Catholic Church convent in Mthatha has now risen to five after yet another nun succumbed to the virus on ...
News
1 year ago

The letter, which DispatchLIVE has seen, says: “This is to confirm that Anele Xhosana rested in peace at Komga Hospital on May 25 and his body was taken by Avbob parlour the same day.

“Unfortunately the fingerprints of the deceased were not done by Komga Hospital staff on a B1 1663 form as they were unaware about the procedure.”

A family friend, Lerissa Mitchell, who assisted the family during the struggle with the hospital, said the Covid-19 test results had not arrived back from the laboratory by the time of his death.

“This family suffered the most and this experience they will never forget. The results were not coming and when we went to East London, we were told that they were in their laboratories in Port Elizabeth,” she said.

Health spokesperson Sizwe Kupelo said: “I am appealing to this family to stop stigmatising Covid-19.

“Several attempts were made by a team of doctors to explain to the family that this patient was under investigation before [he died].

“We gave them a go-ahead to conduct the funeral. There was nothing disgusting about the patient or the corpse.

“Protocols had to be followed and because this patient was under investigation, precautions had to be taken by the nurses and by whoever was handling the body.”

A cheap and widely-used steroid called dexamethasone has become the first drug shown to be able to save the lives of Covid-19 patients in what ...
News
1 year ago

The Xotyeni family of Peddie have come forward with a similar grievance.

They said when their relative died at Cecilia Makiwane Hospital in Mdantsane, they had received the wrong clothing from the hospital and were not allowed to view the body at either the hospital or funeral parlour.

“How on earth would I know if I’ve buried the right corpse? Is this my daughter that I buried here?

“How am I going to erect a tombstone without knowing who is there?

“I am confused,” said Sokupha Xotyeni, 77, who lost her eldest daughter, Noluthando Sulo.

Sulo was a nurse for an NGO based at Grey Hospital’s Gateway clinic in King William’s Town.

It is not clear how she contracted the virus as previous test results were negative.

“She died a mysterious death. We cannot run away from the fact that this virus kills, but at least the health officials should be forthcoming with information, as she was negative and a few days later she got sick and died eight days later.

“This is pure torture,” Xotyeni said.

Noluvuyo Xotyeni, Sulo’s sister, said: “When she died, the hospital sent us the wrong clothes, belonging to someone else who had died — maybe of Covid-19.

“We do not know why they did that. We are made to believe that she was killed by Covid-19 but I tell you, those ventilators or whatever machines they put her on at that hospital had something to do with her death.

“This need to be investigated; we need answers.”

The family might not get the answers they need as the body was buried without a postmortem having been done.

“What is the cause of her death? Is it Covid-19? Must we believe that? What is wrong with the system, why was the postmortem not done to get to know what exactly caused her death,” Noluvuyo asked.

Her younger sister, Nomaxabiso, took the matter up with the health department.

“My sister tested negative after the initial tests done on her and colleagues. She later got sick and she was sent to Grey Hospital and was later transferred to Cecilia Makiwane Hospital, where she was kept on ventilators or those machines.

“She never survived. I phoned the department as I wanted to know the answers of how she died and what was the cause.

“My elderly father is asking questions we cannot answer.”