Fight against abuse of women and children gains traction 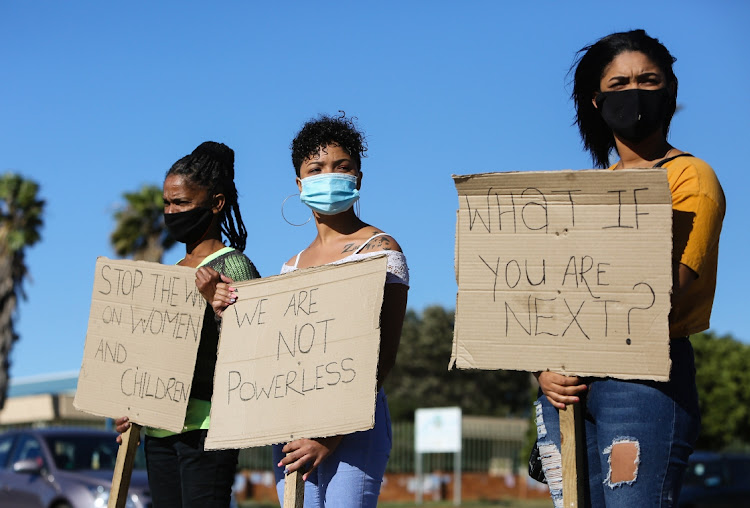 Among those protesting along Stanford Road on Saturday against violence against women and children are, from left, Moya Ferguson and her daughters Nicole and Sadie. Nicole Ferguson organised the protest.
Image: WERNER HILLS

A 26-year-old from Schauderville has opted to use her down time to elevate the plight of women in South Africa through regular silent protests along Stanford Road.

Nicole Ferguson said after hosting a silent protest near Livingstone Hospital against gender-based violence (GBV) and domestic violence against women and children on June 20, she had received requests to stage another one — which she did at the weekend and she is already organising the next one.

The mother of two said five people had participated in the first protest, but a week later the number had increased by at least sixfold.

She said her next protests would be held soon.

Ferguson said that on Saturday people had been stationed at the various four-way stops along Stanford Road as opposed to all gathering at one place, in an effort to ensure that “if people see [the message against GBV] enough it will stick in their minds.”

“After people read the paper and heard me on radio, they became aware and wanted to join this protest.

My main purpose for the protest is to make abusers afraid to abuse women and children. I know getting rid of this violence will take time, but I know it will happen

“My main purpose for the protest is to make abusers afraid to abuse women and children.

“I know getting rid of this violence will take time, but I know it will happen.

“There is a need for a temporary shelter or a safe place [in the northern areas] for women and children that has blankets, a bed and food.

“I will engage with our Ward 10 councillor, Andy Jordan, to help us get a venue where we can get a professional councillor for group therapy sessions once a week or once in two weeks for our community,” Ferguson said.

A Schauderville woman who supported the protest but asked to be anonymous said she had twice nearly died at the hands of her boyfriend and though she screamed for help her neighbours had never come.

She said her boyfriend emotionally and mentally abused her as well as beat her and she knew of other women in her community who were being abused.

“Women can be slapped during the day in my community and no-one will say anything.

“Most of these women pretend to love their boyfriends, but inside they hate them.

“They stay with them because they don’t know where else they can go,” the woman said.

Members of the community of Philippi in Cape Town braved heavy rain on Saturday to march to the Nyanga police station to protest against gender-based ...
News
1 year ago

Jordan said he was proud that young people were standing up to fight the injustice against women and children.

“Yes, abuse against women and children is prevalent in our area, and as councillors we are faced with some women coming to our office for assistance and we refer them to the Gelvandale police centre,” he said.

“To women I would like to say they shouldn’t allow themselves to be punching bags.

“Once you allow something like a slap today, it will end up in a murder tomorrow.

“Our women should not allow this terrible and inexcusable act on them and they must report it to the police immediately. We also need more churches to speak out about this terrible crime.”

He thanked young activists like Ferguson, and said his office would make a venue available once a week for those in need to have consultations with a professional person.