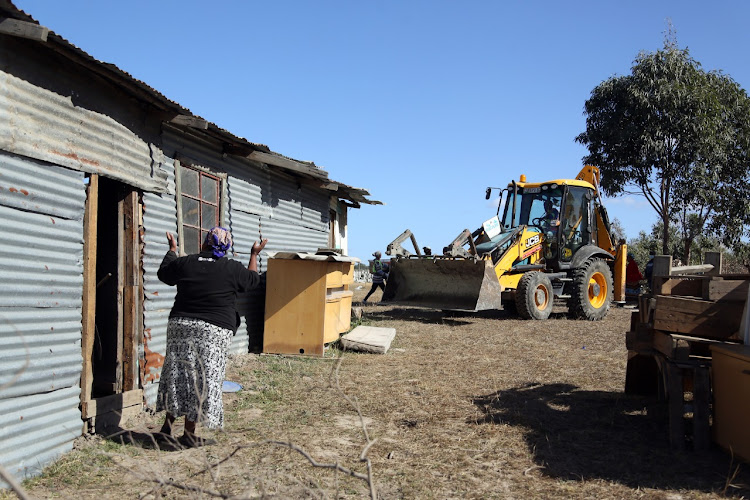 Illegal buildings being demolished outside East London. Scores of families were evicted on Monday from their illegal homes built on the state-owned Greydell farm near the East London Airport.
Image: Mark Andrews

Hundreds of community members from Bhongweni are seeking legal recourse to fight evictions and housing demolitions in their area.

Scores of families were evicted on Monday from their illegal homes built on the state-owned Greydell farm near the East London Airport. Some of the now demolished houses were reportedly worth over R100,000.

Affected residents on Tuesday resolved that each household would contribute R500 towards the legal costs.

The farm, which belongs to the national department of public works, has been the subject of a dispute since January 2018, when illegal householders started building on the land. While poor people and some “rich folks” have taken land for housing, others are concerned that the future expansion of the airport may be hampered by the illegal occupation.

The president stated very clearly that there must be no evictions during lockdown. This should not have happened

“We are now trying to find ways to prevent this ongoing demolition of our structures. The president stated very clearly that there must be no evictions during lockdown, whether it is a legal or illegal occupation. This should not have happened.

“There were no eviction notices. This caught us by surprise. There are not even temporary measures in place to assist the affected families.”

Ncumbese said while they decided each household would contribute funds to fight the matter in court, not all residents were in a position to do so.

“This is an urgent matter but unfortunately some people do not have money, there are some who are unemployed.”

When DispatchLIVE visited the area on Tuesday afternoon, residents were holding a community meeting.

Scores of families were evicted on Monday from their illegal homes on the state-owned Greydell farm in the Bhongweni area near East London ...
News
1 year ago

Resident Lulama Gwaza said her 78-year-old mother and four-year-old grandchild were devastated when their house was demolished. “We have no home. We do not know what is going to happen. My mother has had a stroke and we had to seek alternative accommodation for her.”

She said some houses belonging to prominent people were spared.

Ncumbese, whose house was left untouched on Monday, denied this claim.

“I do not know why some were demolished and some not but, according to my understanding, those that were spared are people living here permanently. But there are even houses with people who permanently live here that were destroyed. This shows that the people who were carrying out this instruction do not know anything.”

He said some of the affected families sought refuge with neighbours. National public works spokesperson Lunga Mahlangu had not responded to questions at the time of going to print on Tuesday.