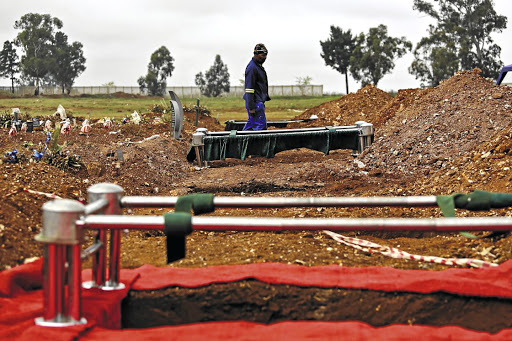 A funeral parlour worker inspects graves before families and friends of the deceased arrive.
Image: THE TIMES/ MOELETSI MABE

Funeral businesses such as Legae's Sopema Funerals have taken such measures to cope with the influx of bodies into their morgues as the number of South Africa’s coronavirus cases rise above 500,000, with deaths at about 9,000.

Surrounded by coffins in his showroom and wearing a protective mask and visor, Legae said he handled 85 funerals in June and 75 in July, compared with 30 a month this time in 2019.

The cost of the container, along with outlays on a temporary outdoor waiting area, more staff and an additional night shift, has helped wipe out additional revenues.

People forget that this industry is actually playing a pivotal role

Legae said the government should do more for under-pressure funeral parlours. “People forget that this industry is actually playing a pivotal role.”

Funeral directors say that beyond the spike in deaths from Covid-19, they have to cope with coffin shortages and delays in the issuance of death certificates.

Data showed in July that South Africa had 59% more deaths than would normally be expected between early May and mid-July.

Amid the scramble, funeral parlours aren't always able to balance strict regulations with the expected sensitivity: there have been reports in local media, including the Daily Dispatch, of the wrong bodies being interred.

Stephen Fonseca, regional forensics adviser for Africa at the International Committee of the Red Cross, said South Africa's experience should serve as a warning for other nations as the continent's cases near one million.

Once a country is facing a Covid-19 surge, it is too late to plan for how to manage mass casualties in a way that is both safe for the body handlers and dignified for the families of the deceased

“Once a country is facing a Covid-19 surge, it is too late to plan for how to manage mass casualties in a way that is both safe for the body handlers and dignified for the families of the deceased,” he said.

Even Avbob, the country's biggest funeral provider by market share, and which was established during the 1918 Spanish influenza pandemic, has had to make changes to cope with Covid-19.

It has buried about 25% of the country's coronavirus dead and saw a 60% rise in burials in July, GM Pieter van der Westhuizen said, adding that Avbob had set up 13 mortuaries in shipping containers and was building four more.

“If we hadn't we might have run into trouble,” he said. — Reuters