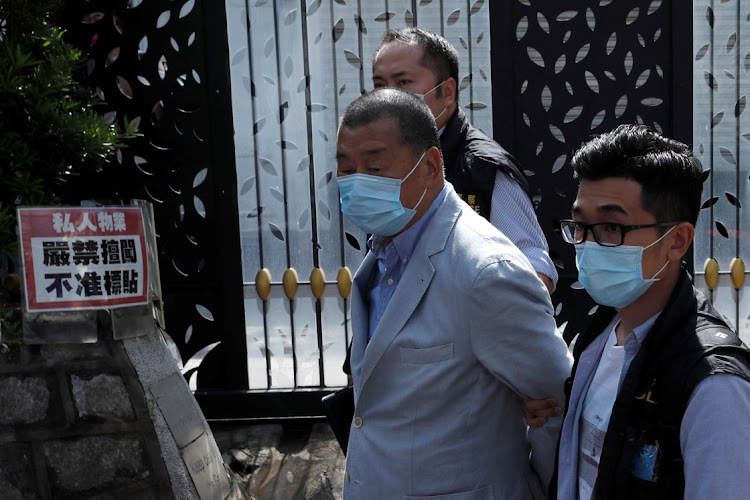 Hong Kong media tycoon Jimmy Lai became the highest-profile person to have been arrested under a new national security law on Monday, over suspected collusion with foreign forces as about 200 police officers searched the offices of his Apple Daily newspaper.

Mainland-born Lai, who was smuggled into Hong Kong on a fishing boat when he was a penniless 12-year-old, has been one of the most prominent democracy activists in the Chinese-ruled city and an ardent critic of Beijing.

His arrest comes amid Beijing’s crackdown on prodemocracy opposition in the city and further stokes concerns about media and other freedoms promised to the former British colony when it returned to China in 1997. China imposed the sweeping new security law on Hong Kong on June 30, drawing condemnation from Western countries.

A Chinese man was forced to take home affairs minister Aaron Motsoaledi to court after his department refused to allow the man back into SA ahead of ...
News
1 year ago

Ryan Law, chief editor of Apple Daily, a staunch antigovernment tabloid that also does investigative work, said that the paper will not be intimidated. “Business as usual,” he said.

The security law punishes anything China considers to be subversion, secession, terrorism or collusion with foreign forces with up to life in prison. Critics say it crushes freedoms, while supporters say it will bring stability after prolonged prodemocracy protests in 2019.

Beijing said it supports Lai’s arrest. A spokesperson for China’s Hong Kong and Macau Affairs Office told the official Xinhua news agency Lai was a representative of people who were “anti-China, anti-Hong Kong” and that he planned and instigated “illegal” protests, funded pro-independence forces and used his media group to spread rumours.

Lai, 71, has been a frequent visitor to Washington, where he has met officials, including US secretary of state Mike Pompeo, to rally support for Hong Kong democracy, prompting Beijing to label him a “traitor”.

Hong Kong police said they had arrested nine men and one woman, aged between 23 and 72, without naming them, adding that further arrests are possible. Suspected offences included “collusion with a foreign country/external elements to endanger national security, conspiracy to defraud” and others, the police said.

Apple Daily posted a livestream on its Facebook page of police officers roaming through its newsroom and rifling through files, and asking staff for identity documents. Some executive offices were sealed off with red cordon tape. The police later wheeled in stacks of empty plastic containers. Lai himself was brought back to the office, initially in handcuffs.

“We can’t worry that much, we can only go with the flow,” Lai said, before being escorted into a police vehicle. In a Reuters interview in May, Lai pledged to stay in Hong Kong and continue to fight for democracy.

Police said about 200 officers entered the premises with a court warrant and collected 25 boxes of evidence after finishing the search. The law allows police to search premises without one “under exceptional circumstances”.

In major cases in Hong Kong, the central government in Beijing can claim jurisdiction. The legislation allows agents to take suspects across the border for trials in Communist Party-controlled courts.

Apple Daily reported that one of Lai’s sons, Ian, has also been arrested at his home and later showed his restaurant, Cafe Seasons, being raided by police. Other senior Apple Daily staff, including executive director Cheung Kim-hung, were also arrested.

Shares in Lai’s media company Next Digital, which publishes Apple Daily, plunged 16.7% before rebounding to trade 344% higher at one point as online prodemocracy forums called on investors to buy shares to show support.

China retaliates with sanctions on 11 US citizens

“We see this as straight harassment,” an Apple Daily source said, adding that Lai was arrested on suspicion of sedition, criminal fraud and colluding with foreign forces. Next Media Trade Union called the search “an extremely rare and serious incident in Hong Kong history”, with a “catastrophic” impact. It said journalists “will continue to guard their posts until the last minute”.

Apple Daily executive Chan Pui-man said the newspaper will be published on Tuesday. “Even if Apple Daily publish a pile of blank paper tomorrow, we would go and buy a copy,” prominent young activist Joshua Wong said on Twitter.

Wong’s longtime colleague Agnes Chow and two other activists were among those arrested on Monday, local media reported. Before Monday, 15 people, including teenagers, had been arrested under the new law.