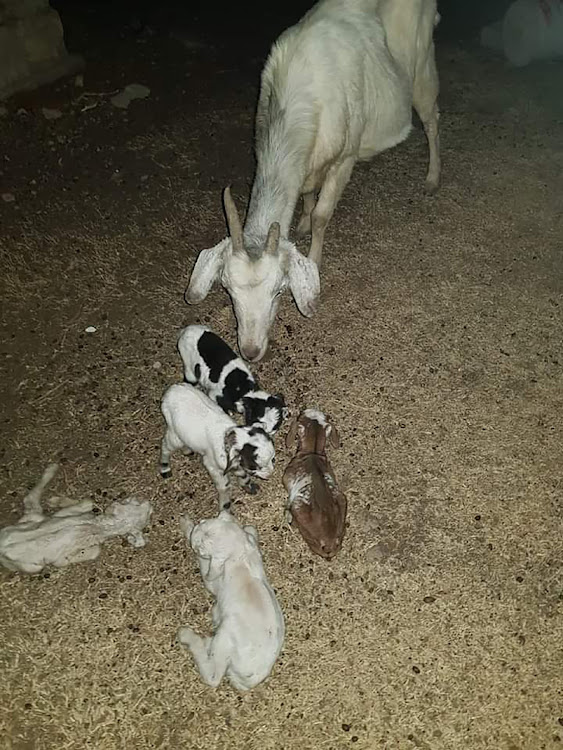 An Eastern Cape goat has given birth to quantiplets, a first in the Eastern Cape, according to the rural development and land reform department.
Image: SUPPLIED

“Goat”, the acronym for “greatest of all time”, is bandied about a lot these days to describe leading sports people but an actual goat in Mount Ayliff can surely also lay claim to the title  after giving birth to quintuplets — a first in the province's government records.

Department of rural development and agrarian reform spokesperson Ayongezwa Lungisa told the Dispatch that the August 1 birth was definitely a first in the Eastern Cape.

The farmer, Rose Dangisa, has a flock of 90 goats, 37 of which have had 52 kids so far. Twelve are about to give birth.

It's not unusual for that goat to give birth to twins, but this is the first time it gave birth to five

“It's not unusual for that goat to give birth to twins, but this is the first time it gave birth to five,” said Dangisa, who started breeding goats in 1992.

“I was shocked to find the five little goats. I couldn't believe what I saw. Everyone in the community was taken by surprise by this. It's definitely the first time it has happened in our area. This was followed by nine goats giving birth to twins. All of them are healthy,” she said.

Dangisa described the Mount Ayliff landscape as “quite dry”.

“You have to help your stock by feeding them because of the conditions,” she said.

In our records, it is the first time an incident of this kind has been recorded in the district. It's a rarity and a good indication for the farming industry

Lungisa said: “In our records, it is the first time an incident of this kind has been recorded in the district. It's a rarity and a good indication for the farming industry, taking into account that goats can kid every seven to eight months when there are good nutrition plans and animal health programmes such as deworming and dipping.”

The goat, however, is having difficulty in feeding its five young ones as it only has two teats.

Lungisa said the department had advised the farmer to supplement the feeding of the quintuplets with bottle-feeding.

“The department will support the farmer with feed and supplements that will help the goat produce more milk, thereby helping the kids to grow,” Lungisa said.

“It's not rare for goats to have multiples. What is more interesting about this farmer is that so many of her goats are giving birth to twins, which is a good indication of fertility in her flock.”

Lungisa said a team of scientists would be visiting Dangisa and the entire village for further analysis and genotyping of all the goats in the area.

“As the department, we are interested in finding out the parentage verification from the herd or communal flock so that we can keep and monitor the goat with high fertility.

“Where we can, we will also sample using hairs or blood for sample processing, which can be done by the Onderstepoort biotechnology platform. Molecular analysis will give a more accurate pedigree in this case. The aim is to find [out which] of the goats has this trait.”