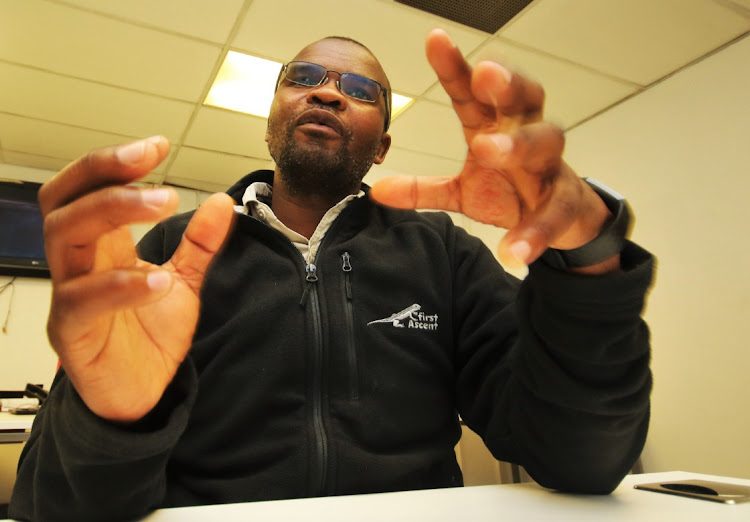 Bronze Nocuze, a warrant officer in the Mthatha police, said the body of his nephew, Bulelani Nocuze, 29, was found in a pool of blood in the storeroom at  Smuts Ndamase High School in Nkanga-Mbhobheleni village on Monday morning
Image: LULAMILE FENI

Distraught family members of a man found dead on a Libode school premises on Sunday are demanding justice.

Bronze Nocuze, a warrant officer in the Mthatha police, said the body of his nephew, Bulelani Nocuze, 29, was found in a pool of blood in the storeroom at  Smuts Ndamase High School in Nkanga-Mbhobheleni village on Monday morning.

"This was a gruesome discovery. The school's administration block was turned into a slaughterhouse, with the walls and floor full of blood splatters. There was a pile of broken sticks,” he said.

“Bulelani's arms were tied behind his back as he lay face down among containers of chemicals. There is a trail of blood that leads from the main gate to the administration block. This is bad, this is inhumane. Why did they not call the police and an ambulance unless they wanted to kill him?”

He said cold water had been poured over his nephew, who was then locked in the storeroom and left to die.

East London teachers and pupils live in fear of criminals

Teachers at St John's Road Primary School in East London can't even walk from one building to another without a male escort for fear of their own ...
News
1 year ago

He believes those who killed his nephew were matric pupils who had been attending night classes at the school.

''Those who spilt Bulelani's blood must account for their actions. Everyone who played a part must be jailed.”

He did not know why his nephew was at the school.

''Some residents arrived and managed to stop the boys from beating him. But then they decided he should be locked in the storeroom until the following day. They even stopped the principal from calling for an ambulance and reporting the matter to the police. Someone must be arrested, be it the schoolboys or the residents,'' Nocuze said.

“The culprits must be arrested and the law must take its course. This has left the entire community with a bad name, as if we are village of killers,'' Ndamase said.

Motshekga insists schools were ready to reopen, but opposition doesn't buy it

Basic education minister Angie Motshekga says the government is satisfied that its systems are ready - and have been ready - for the reopening of ...
Politics
1 year ago

An urgent community meeting was held at Ndamase's great place on Tuesday.

“People will not interfere with the investigation. I personally know the deceased, and I am shocked to hear  of this brutal killing,'' Ndamase said.

Provincial education spokesperson Loyiso Pulumani said it was a shocking turn of events. “Clearly this does not help any existing instability at the school. The district office has assigned a circuit manager to deal with this matter and restore stability at that school.”

Eastern Cape police spokesperson Colonel Sibongile Soci said: “A case of murder has been registered. No arrests have been made at this stage.”