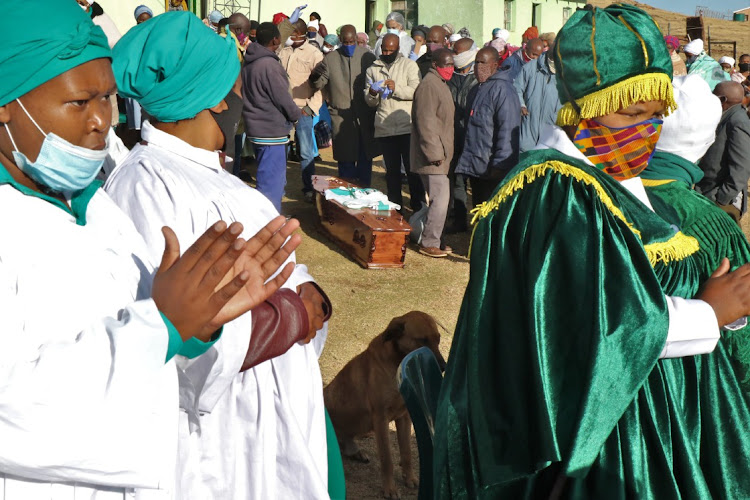 Noloyiso Gengqa who was on Mondady shot execution style allegedly by her ex-boyfriend at her Mandleni Junior Secondary School at Xunu village in Mthatha, was on Sunday buried.
Image: LULAMILE FENI

Men must lead the battle against gender-based violence (GBV) and femicide, and not leave women to fight alone.

The epidemic is not the sole responsibility of government and police, but requires all sectors of society.

Men need to take action against the scourge to restore the dignity of women, redeem the integrity of men and create patriotism.

'Come to us, we will protect you': KZN taxi drivers take a stand against GBV

KwaZulu-Natal taxi drivers are taking a stand against gender-based violence and appealing to women to seek their protection should they ever be in ...
News
8 months ago

This was a key message during the funeral of Noloyiso Gengqa, 29, near Mthatha on Sunday.

She was shot in the back of her neck while pinned down on her face with a foot, allegedly by her ex-boyfriend, Avumile Mbuyiseli Nodongwe, at Mandleni Junior Secondary School last Monday, where she was working as part of a Covid-19 support team.

It is alleged Nodongwe could not accept that Gengqa was breaking up with him.

Speakers at the funeral challenged men to show where they stood by being vocal when it came to GBV issues.

Local councillor Zanemvula Gusana said since January three more women were brutally killed in the ward, but nobody had even been arrested.

“The GBV struggle is not a women’s struggle. It is a societal battle. It must be fought by old and young.

As men we cannot sit still and do nothing while our wives, our sisters and daughters, are killed and raped by men

“As men we cannot sit still and do nothing while our wives, our sisters and daughters, are killed and raped by men,” Gusana said.

The village and all parents who send their children to Mandleni JSS will meet at the school on Tuesday to discussion a programme of action and a planned #Justice4Noloyiso picketing campaign.

Gusana said the community would march and picket at the Mthatha magistrate’s court on Thursday, when the accused will appear for the second time.

Acting school principal Nomvuzo Mvange-Tanga said since the brutal killing of Gengqa a week ago, learning and teaching at the school had been suspended.

“This was to mourn her; give her family time to conduct their rituals, including spirit repatriation. The suspect has [allegedly] made a confession and was at the school with police on Friday doing pointing,” Mvange-Tanga told mourners.

Real solutions to GBV continue to elude nation in mourning

On the August 23, Asithandile “Kwasa” Zozo, who was pretty much a daughter to me, was laid to rest. Her life was cut short at a young age in a ...
News
8 months ago

They updated the family on the progress of the investigation and made a general statement condemning GBV.

Mgwenya and Ntshinga appealed to men to stand up and protect their families, but stressed they should never take the law into their own hands.

Mgwenya said: “It is disheartening that Noloyiso and many other women across the country are murdered, even during Women’s Month. This is not what women marched for in 1956.”

Ntshinga called for men to protect widows and orphans in particular.

“Men should do introspection to see where it all went wrong,” Ntshinga added.