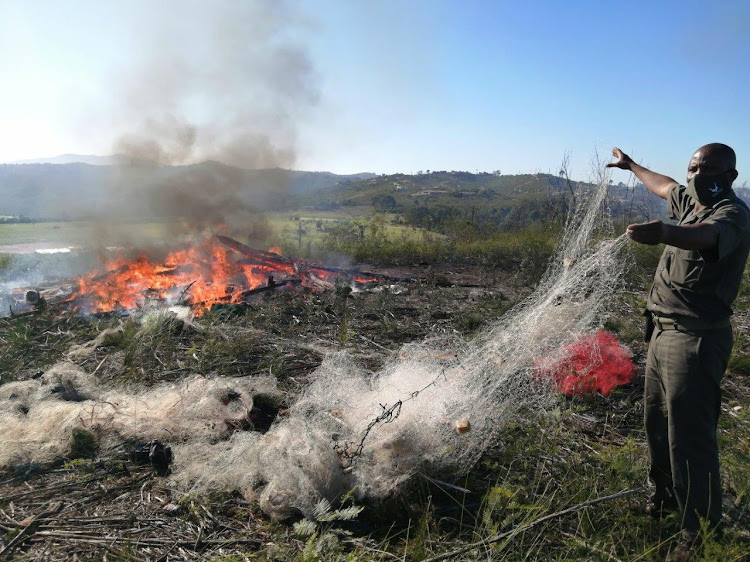 SANParks staff burn more than 3km of poachers’ gill nets seized from the Touw and Swartvlei estuaries in the Wilderness section of the Garden Route National Park.
Image: Supplied

More than 3km of poachers’ gill nets which have been threatening the local wildlife population of estuaries in the Wilderness area for years, have been removed and burnt by SANParks.

SANParks spokesperson Nandi Mgwadlamba said on Friday the nets were seized by rangers in the Touw and Swartvlei estuaries, which fell within the Garden Route National Park.

“The interception and removal of gill nets from these estuaries is a high priority for SANParks Wilderness-based rangers.

“Gill nets are not only illegal but can be a highly destructive and indiscriminate form of fishing that threatens local fish populations and their sustainable use.

“A whopping 3,363m of gill nets were removed from the Touw and Swartvlei over the past 36 months and burnt in a recent exercise.”

While scores of SANPark lodging facilities stood vacant during the coronavirus lockdown that halted all holiday travel,  animals occupied some of the ...
News
1 year ago

The gill nets generally consisted of netting material from vegetable pockets that have been collected and sewn together, she said.

“At risk are fish, animals like terrapins and otters, birds like cormorants and greater crested grebes and also water plants.

“All these species contribute to the life of the Touw and the Swartvlei which are both in the top 10 mega-biodiverse estuaries in South Africa.”

But careful steps were taken to set them only at certain times which were judged to be the least intrusive and the nets were monitored continuously and only left in the water a limited amount of time.

In this way fish deaths were minimised.

The poachers on the other hand typically set their nets at night to maximise their catches and left them unmonitored for long periods of time, she said.

“The mesh size is generally small which means many juvenile fish are caught.”

Because they trapped large volumes of fish, the poachers’ gill nets threatened recreational and subsistence anglers, and catch rates for these sectors in areas where gill nets were set and not removed was significantly reduced, she said.

Bits of net and other debris including polystyrene and plastic bottles used to float the nets also accumulated and caused a problem for wildlife.

Mgwadlamba said the poachers used stolen or borrowed canoes to set their nets.

“They paddle to a concealed place and then after they’ve set their nets the canoes are concealed in the reed beds.”

SANParks was liaising with local vegetable suppliers and creating greater awareness around the problems associated with illegal gill netting, she said.

“This approach has been beneficial with suppliers being very co-operative and more careful with discarding packaging material when their deliveries of fruit and vegetables arrive.

“Unfortunately, some of this material still slips through into the wrong hands.”

Scientists racing to save the northern white rhino from extinction have harvested 10 more eggs from the last two females alive which they hope will ...
News
1 year ago

SANParks had also sought to limit the boats available to the poachers.

Wilderness and Sedgefield residents had been discouraged from keeping their canoes or other boats on the banks of the estuaries.

Boat owners had further been encouraged to register their craft with SANParks to help track down the owners of stolen and abandoned craft,  she said.

“We appeal to our local communities to work with rangers to report any suspicious activity or signs of netting to SANParks on 044-877-1197.”