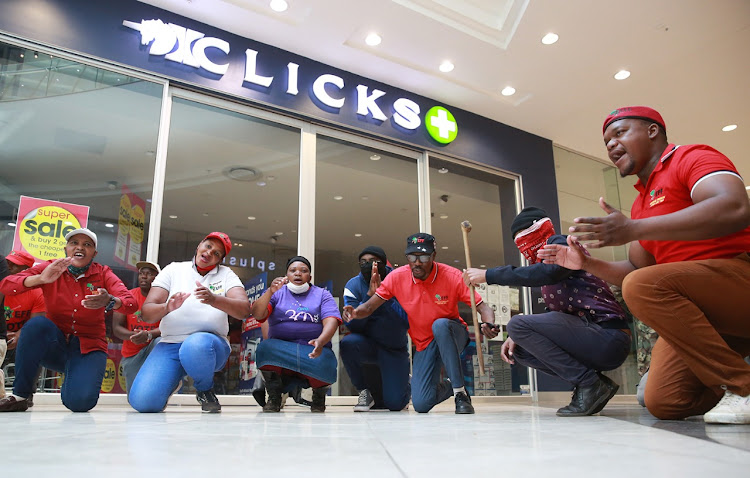 EFF members came out in numbers on Monday at the Mall of Africa to make sure the Clicks store remained closed after a 'racist' advert for hair products was featured on the retailer's website.
Image: Thapelo Morebudi/The Sunday Times

Seven Clicks stores have been damaged after the controversy surrounding a hair advert which depicted a black woman's hair as dry and damaged, while a white woman's was labelled as dull and flat, then normal and fine.

This comes as the EFF is leading a protest aimed at shutting Clicks stores countrywide because of the advert, which was deemed demeaning to black hair, was published on its website.

Party leader Julius Malema was outside Clicks at the Mall of the North, Polokwane.

“The only way to make capitalists apologise and feel genuine remorse is for them to lose money. #ClicksMustFall,” the party stated.

Malema announced that the party intended to ensure that no Clicks stores opened this week.

“Today is the beginning of rolling action against Clicks.”

He appealed to security guards and police to not intervene against his supporters.

“Peaceful protest is not a crime, it is protected by the constitution ... and we require no-one's permission.”

Protest action by the EFF is happening at 37 of its stores across KwaZulu-Natal, Gauteng and the Western Cape. Seven stores were damaged, including Saveways in Witbank and Cycad in Polokwane. A store in Alberton was also vandalised and set alight on Monday morning.

“Clicks strongly condemns violence of any kind or intimidation of staff and its customers. Clicks will take legal action against perpetrators and those seeking to incite violence or harm our people and our stores,” the retailer said in a statement.

The retailer says it provides a much-needed health-care service to South Africans and says stores will remain open for trading. It says contingency plans have been put in place to ensure the safety of customers and staff.

“Clicks has taken full accountability and apologised unreservedly for the advertisement published on its website and has taken immediate action to address all concerns,” the statement concluded.

He said two employees allegedly responsible for the advert have been suspended.

Malema, speaking at a protest in Polokwane, said the EFF wanted all employees responsible for the advert to be dismissed.

Meanwhile, EFF deputy president Floyd Shivambu, speaking outside a Clicks store in Sandton City, said no court order would stop the party from protesting against racism.

In a statement, the EFF welcomed a court decision to dismiss Clicks' urgent court application to bar the party from protesting outside its stores.

“The application by Clicks was dismissed due to being defective, with costs and as the EFF, we are vindicated that their arrogance was dealt with harshly by the courts,” an EFF statement said.

Clicks at Alberton mall vandalised with hammers and set alight

The party distanced itself from any of the violence meted out to Clicks staff and stores.

“This is in no way associated with the EFF, as our protest action is conducted peacefully and lawfully,” the statement concluded.

DA MP Andrew Whitfield strongly condemned the EFF’s actions and accused them of inciting violence and the resultant malicious destruction of property.

“We will lay charges of incitement to violence and destruction of property against the EFF and, more especially, its leadership. We call on the police to take immediate action,” Whitfield said.