More than R69,000 raised for teen breadwinner — ‘He needs to focus on his matric studies’ 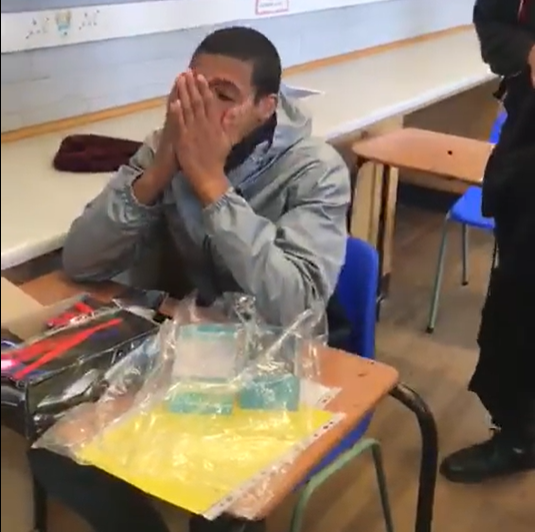 Tasreeq Doovey, 17, from Cape Town, was reduced to tears when his classmates gave him a cellphone and a matric jacket.
Image: FACEBOOK/ ROXANNE CARTER

More than R69,000 has been raised through a BackaBuddy campaign to help 17-year-old Tasreeq Doovey, a grade 12 pupil at Windsor Secondary School in Cape Town.

The fundraising initiative was launched by a family friend, Roxanne Carter, who said Doovey juggles school with part-time work as he supports his mother and three younger siblings.

Carter said the money will sustain the household while Doovey uses the remaining months of the academic year to focus on his studies. The excess amount will pay for Doovey's first-year college or university needs.

“The aim was to raise enough money to sustain the household without him having to work weekends until he has completed his final matric exam. The donations mean he can focus on his final months of school,” wrote Carter.

An anonymous donor who chipped in R1,057 wrote: “May you never feel alone and continue to reach for the stars. Hang in there.”

Claudine Coughlan wrote: “All the best in your last few months of school. You are an amazing man and your family can be proud.”

Carter said Doovey's classmates covered the cost of his matric jacket and gifted him with a used cellphone after he was robbed last week on his way home. She shared a video of the special moment which has now gone viral on Facebook.

An emotional and speechless Doovey can be seen wiping tears as his friends hand him the gifts.

Carter wrote: “As a mother, I am so proud of the person we are raising. I'm pretty sure the other parents feel the same. Here's to the class of 2020. I'm extremely proud of you guys.”