Marchers to embassies in Pretoria demand #PutSouthAfricansFirst - ahead of foreigners 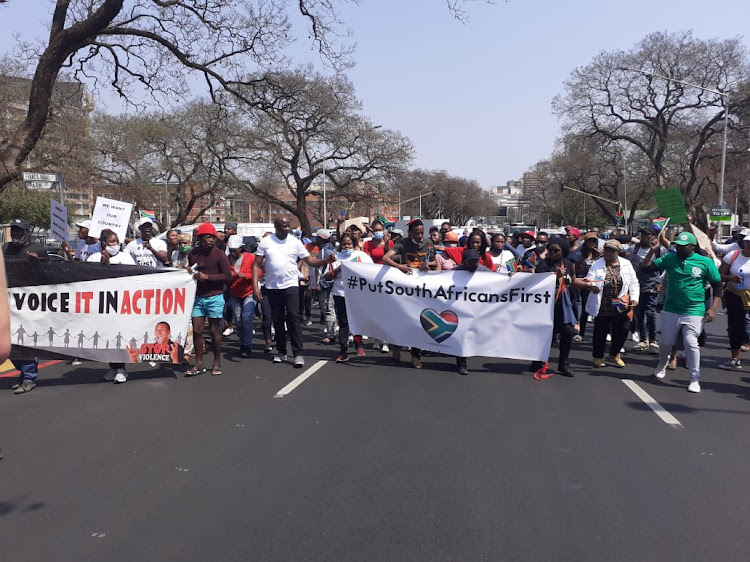 Supporters of the Action for Change grouping marched through Pretoria to the Nigerian embassy on Wednesday to protest about the alleged involvement of foreign nationals in SA's high crime rate.
Image: Shonisani Tshikalange/TimesLIVE

Demonstrators are marching on the Nigerian and Zimbabwean embassies in Pretoria on Wednesday, alleging the involvement of those nationals in SA's high crime rate.

The marchers are also demanding that state resources be prioritised for SA citizens.

A leader of the Action for Change grouping, Nandisa Gschwari, highlighted human trafficking as a concern.

“Today we are here to represent women. There is a lot of human trafficking happening in SA. Children are being kidnapped and it's very, very painful. Today we decided to take a stand, to go to the most well-known perpetrators, Nigerians,” she said. “The pain we are feeling as South Africans is too much. If they are telling us South Africans are involved, then they must point prove it because so far the evidence is pointing to them,” she said.

Gschwari said those labelling the march xenophobic “are allowed to do so”.

She emphasised that the movement's goal is to address human trafficking, which she said is increasing.

“In SA we have a freedom of speech, so they are allowed to call it whatever they want. They will be sitting at a point where they will be defending themselves. They are going to try to discredit us, but this time nothing is going to stop us. We are saying 'save our children' and 'no to human trafficking'. I stand for women. I am a woman. I am a mother myself.”

Gschwari said the extent of drug use in the city was also a concern.

“Some women I went to school with, for some reason, when they went to varsity they got hooked up with Nigerians doing drugs and hooked up with their 'glamorous life', but today they are junkies,” she said.

Police minister Bheki Cele on Tuesday cautioned against the growing number of allegations being made about human trafficking. The Gauteng Community Police Board, in a separate statement, also said it was disappointed about the recent increase in reports on social media about the alleged rise in kidnappings and human trafficking of minors.

Expressing concern about the fear and panic these reports have caused, the board said “there is no notable statistical increase in the reporting” of these crimes, “be they attempted kidnapping or actual kidnappings”.

“The unverified claims only serve to waste police resources and cause unnecessary fear and panic in the minds of law-abiding citizens. In some instances the fake news has led to an unlawful mob mentality and even xenophobic behaviour.

“The board appeals to all citizens to uphold the law, maintain calm and stop the dissemination of fake and unverified reports that only seek to create panic and divisiveness among communities.”

A million South Africans expected to march against corruption

A million South Africans are expected to brave the cold on Saturday morning to take part in the Move One Million march to protest against corruption ...
News
1 year ago

In cases of direct knowledge of crimes being committed, these should be reported for proper investigation. Tip-offs in relation to kidnappings and human trafficking, which are viewed in a serious light by the police, can be reported on 0860010111 or via the MySAPS app.

The board said: “All information will be treated with the strictest confidence. Citizens may also contact their local police station with any information that will assist law enforcement in the investigation of these criminal events.”