The other suspect has been arrested twice before, police minister confirms 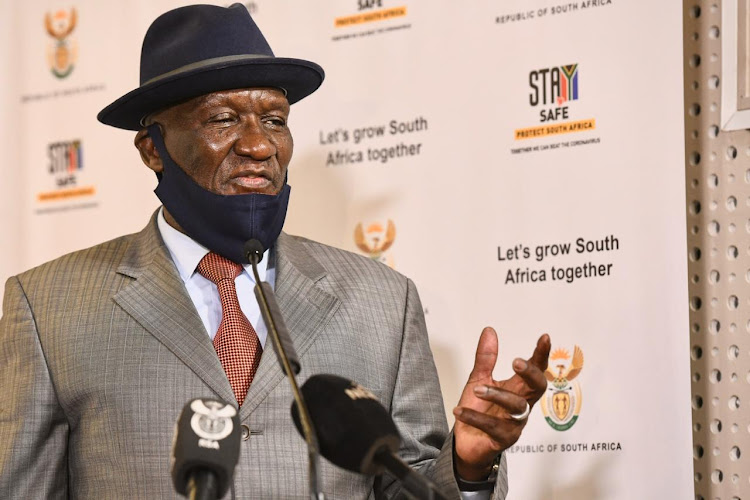 Police minister Bheki Cele on Monday confirmed that the two men accused of murdering a Senekal farm manager had been arrested previously, one of them 16 times.
Image: Jairus Mmutle/GCIS

Police minister Bheki Cele has revealed that one of the men arrested for killing Senekal farm manager Brendin Horner had been arrested 16 times.

“I would like to know why a person who has been arrested 16 times is still given another chance to commit another crime,” he said.

Cele, who is scheduled to visit Horner's family this week, said these were some of the issues that the justice and security cluster would have to discuss. He said the cluster was working “much closer” on these matters.

He told journalists on Monday that he had met EFF leader Julius Malema and was scheduled to meet the leader of the Freedom Front Plus, Pieter Groenewald, “in the next 24 hours”.

“We spoke yesterday with the leader of EFF and we have agreed that we will have to be mature, provide leadership and try our best to make sure that those things are avoided,” he said.

Cele said the authority of the state would not be abandoned and that people cannot be allowed to bully the state, as happened last week.

Chaos unfolded outside the Senekal magistrate’s court last Tuesday after the appearance of two men charged with Horner's brutal murder. Farmers who attended the court proceedings stormed the court building, damaging the property as they demanded that the two suspects, Sekwetje Isaiah Mahlamba and Sekola Piet Matlaletsa, be handed over to them.

The disgruntled group also overturned a police vehicle and set it alight.

President Cyril Ramaphosa says the violent protest that took place after the court appearance of the two men linked to Brendin Horner's murder in ...
News
1 year ago

He said the government was doing everything to speak to everyone concerned about the developments in the town, “but when but when push comes to shove, the forces of the state will defend the authority of the state, its property - life and limb”.

“It's my job to meet the leadership of political organisations and formations. We are working on meeting the local farming community leadership in Senekal. That they talk war and all that, mine is to sit down and say, can't we take this way out of this,” he said.

Cele also appealed to the media to be careful in its reporting on the Senekal matter, saying the situation was tense and dangerous and things could go “wayward”.

He denied saying that farmers should “expect to get hurt”, saying his office was referring a media report to this effect to the press ombudsman. Cele allegedly made this statement during a farming meeting in Normandien, KwaZulu-Natal, last month.

Mmusi Maimane: Senekal murder should not be reduced to a race war

One SA Movement leader Mmusi Maimane says the murder of 21-year-old farm manager Brendin Horner in Senekal, Free State, must not be reduced to a race ...
News
1 year ago

“What we will do is ask our team to go to Senekal to engage with the farmers there to find out how many cases have been reported and what is happening and if there are any thieves that can be arrested on the spot,” she said.

“I will make sure there is an investigator going there to gather information and see how we proceed with the matter.”