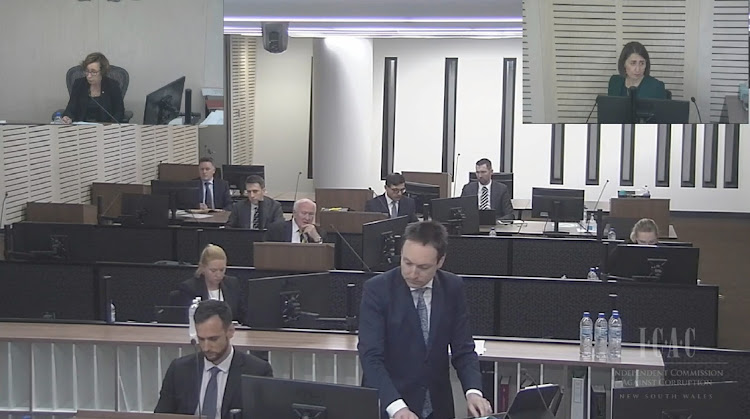 An Australian politician who was in a secret relationship with the premier of the country's biggest state economy sought to broker deals and set up government meetings for Chinese businessmen wanting to establish a casino and businesses in the Pacific islands, a corruption inquiry was told on Tuesday.

Daryl Maguire, offered to set up meetings with the Prime Ministers of Papua New Guinea and Samoa for the head of a Shenzhen business association, according to telephone intercepts and messages shown in the Independent Commission Against Corruption (ICAC) inquiry.

NSW Premier Gladys Berejiklian has testified to the corruption watchdog that she was in a “close personal relationship” with disgraced former MP Daryl Maguire.

He also hosted meetings with Pacific Island consuls at the NSW Parliament that were attended by Chinese businessmen.

On Monday, the NSW Premier Gladys Berejiklian revealed to the inquiry she had been in a secret personal relationship with Maguire since 2015, prompting calls from the Opposition Labour Party for her to resign.

Berejiklian told the media the relationship was a mistake and she wouldn't resign “because I haven't done anything wrong”.

Maguire was forced to resign from parliament in August 2018, after an earlier corruption inquiry heard evidence he sought to broker Sydney property deals for Chinese companies.

When news of Maguire's involvement in the 2018 corruption inquiry was made public, his business associate Maggie Wang was called in China by a mutual friend, Du Wei, and told to delete phone messages and emails from Maguire, Wang told the inquiry.

He is a Chinese diplomat who lives in Beijing and had been a family friend for 30 years, Wang told the inquiry.

The Chinese foreign ministry has been approached for comment.

Maguire had rung Du Wei in China to request she delete the messages, Wang said. “I just comply with what he said.”

Australian casino billionaire James Packer on Tuesday acknowledged sending threatening e-mails in 2015 to an unnamed person with whom he was working ...
News
6 months ago

The latest inquiry is investigating whether Maguire sought to monetise his position as a politician in breach of rules.

Email evidence to the inquiry shows Maguire first approached Wang, an Australian citizen, to work with him on business deals between Australia and China on September 7, 2012, at the suggestion of Du Wei.

A resume seen by Reuters shows Du Wei previously worked at the Chinese embassy in Washington in 1994 “lobbying the US Congress for China's Most Favoured Nation” trade status.

He later worked for the foreign ministry in Beijing “overlooking US congressional affairs”, according to a resume submitted to the Australia-China Chamber of Commerce in 2004.

A bill that could restrict businesses of foreign nationals in Gauteng townships has been flagged as having the potential to increase xenophobia, but ...
News
6 months ago

Wang told the inquiry she and Maguire planned to share profits from business deals, including an immigration scheme in which cash was offered to Australian businesses to falsify the employment of Chinese nationals seeking visas.

Other email evidence showed a consultancy business in which Maguire was a silent director listed Du Wei as its representative in Beijing.

Wang told the inquiry she had previously given false evidence, and asked other witnesses not to tell ICAC about cash payments involved in the visa scheme. Asked why she had decided to tell the truth, Wang replied: “I can't keep going any more. It's too hard.”

Maguire will give evidence on Wednesday. — Reuters