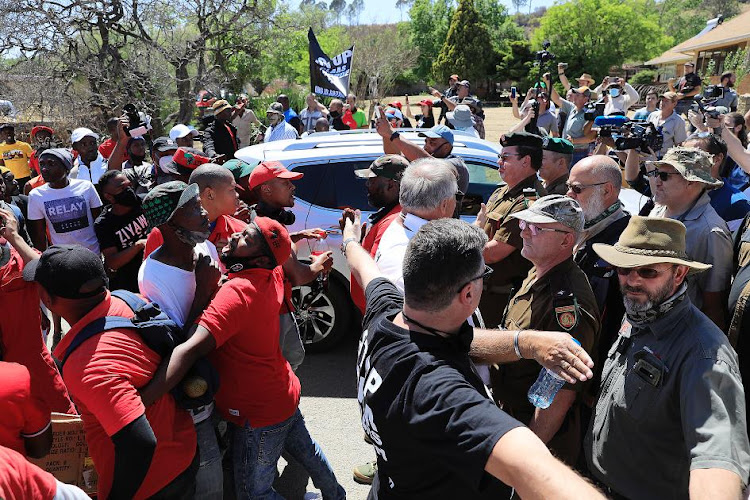 Police were keeping a tight rein in Senekal on Friday, where hundreds of EFF supporters and around 100 farmers and 20 bikers were staging demonstrations.
Image: Alon Skuy/Sunday Times

The state believes Sekwetje Isaiah Mahlamba and Sekola Piet Matlaletsa - the two men alleged to have murdered farm manager Brendin Horner - may have bragged and confessed to the killing while enjoying beers a few hours after the murder.

Presenting his information at the Senekal magistrate’s court on Friday, where the bail bid of the accused was being heard, the prosecutor* told the court the state had at least two witnesses who could attest to this.

Your clothes were wet and bloodstained.

One witness had allegedly submitted an affidavit to the police, saying he had seen Mahlamba and Matlaletsa seated together at a local tavern on the day after Horner’s murder.

The witness said he overheard Matlaletsa “tell a third person how [Mahlamba] and him went to a farm and assaulted a white man who had disturbed you,” the prosecution said.

The witness said the way the assault was described led him to believe the person being referred to was Horner.

“Both of you made admissions incriminating yourselves in the robbery and assault of the deceased,” the prosecution said.

Mahlamba refuted this, saying he had never been to the farm where Horner was killed.

He denied socialising with Matlaletsa, says Matlaletsa was simply a neighbour who he saw around.

A witness denies you slaughtered a sheep.

Another witness has allegedly given a statement under oath claiming she saw the two suspects coming from the direction of the farm where the deceased was killed on October 2,  the morning after Horner was murdered.

“This witness saw you coming from the direction of the farm where the deceased was killed. Your clothes were wet and bloodstained,” the prosecutor said.

Mahlamba also disputed this witness’s testimony, maintaining he had spent the evening of October 1 in the company of his girlfriend.

He denied being involved in 21-year-old Horner’s murder, adding that he did not know Horner nor the details of his murder.

In his testimony earlier on Friday, Mahlamba maintained two pairs of bloodstained trousers found in his house were not stained with Horner’s blood. He claimed the blood  came from a sheep he had helped  slaughter at a local house.

Free State police announced on Friday that the N5 road running through Senekal has been temporarily closed.
News
1 year ago

The prosecutor, however, said a local woman, named only as Pinky, had denied this evidence.

“The police followed that version up and possess an affidavit by Pinky. She confirms a  traditional fest did take place at her house in September, but she denies you attended the feast and denies you helped to slaughter the sheep,” the prosecution put to Mahlamba.

“I was there,” he retorted through an interpreter.

Mahlamba’s alibi is that on the night of Horner’s murder, he was at home in the company of his girlfriend.

The prosecution however, said an affidavit given by his girlfriend under oath suggested the couple did not spend the entire night together.

The 32-year-old murder accused, who was out on bail at the time of the murder after being arrested for stock theft, is trying to get bail again.

The prosecution team wants him to remain behind bars, saying he was a flight risk as he had no assets except a sound system, could have access to the witnesses, could meddle with the case and had nothing  to lose.

Mahlamba had told the court that if he was granted bail, this would be paid by his pensioner father.

In attendance in the court gallery are EFF leader Julius Malema and police minister Bheki Cele.

* The prosecutor is not being named because he requested that the court protect his identity, adding that this was a sensitive case.