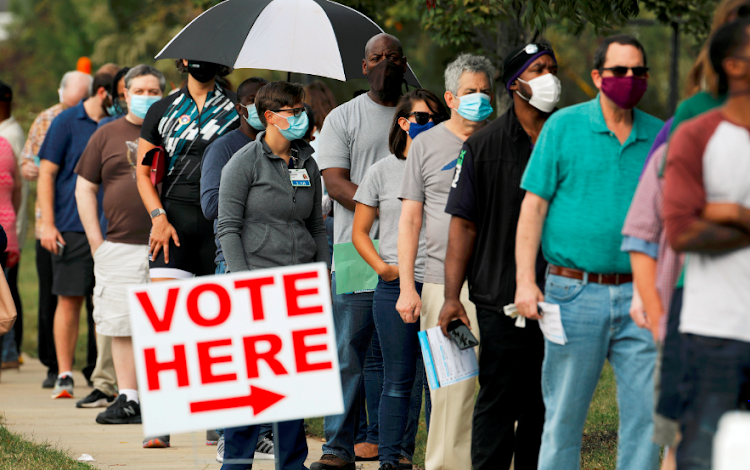 Voters wait in line to enter a polling place and cast their ballots on the first day of the state's in-person early voting for the general elections in Durham, North Carolina on US October 15 2020.
Image: REUTERS/Jonathan Drake/File Photo

But when it comes to voting in the US presidential election, many said climate change was not their top issue.

Their priorities ahead of the Nov. 3 election reflect those of the wider electorate: the battered U.S. economy, the Covid-19 pandemic and racial justice.

"I know everybody’s biggest issue right now within this class is environment. And it’s super important to me but another thing that I feel is more important personally because I'm an African-American woman is race," said Kelia Surrency, 23.

"The environment is 100% important to me, but I need someone in that office that doesn't look at the Black community as lesser-than."

Many in the class at California State University, Sacramento, were having trouble finding entry-level jobs or internships in the Covid-wracked economy, said Goldstene, a former top California air pollution regulator.

"With Covid going on and a lot of people losing their jobs and struggling, worrying about how they are going to pay for stuff. I think that does overshadow climate," said another student, Enrique Dominguez, 23.

The students' views illustrate how climate change, even when an issue of great voter concern, is eclipsed by other problems. "Our attention span is limited," said Joe Arvai, director of the Wrigley Institute for Environmental Studies at the University of Southern California. "Unless your house is on fire, you're not going to be experiencing climate change firsthand."

Only 7% of likely voters aged 34 and under named environment and climate as their top concern in choosing a president, according to a Reuters/Ipsos poll conducted between Sept. 29 and Oct. 13. Among likely voters of all ages, only 4% prioritized climate and environment.

By comparison, Covid-19 was the top concern for 25% of young voters, while jobs and the economy were named by 20%. (Graphic: https://tmsnrt.rs/37c3oCk)

The campaign sees young voters as important to Biden's chances of winning the election -- a major challenge given the typically low turnout by the demographic. In 2016, turnout among voters under the age of 30 was about 46%, according to the U.S. Census Bureau. By comparison, 71% of those 65 and older voted.

Aware of voters' worries about the economy, public health and systemic racism, Biden's campaign has wrapped environmental issues into a broader discussion of green jobs and a healthier environment.

"When you look at a really deep issue like climate, there’s no way to separate it in your solution from the interconnected and overlapping issues like job creation, economic growth, prosperity and also health," said climate activist and billionaire Tom Steyer, who is advising Biden on environmental issues.

Biden has endorsed a $2 trillion plan to promote clean energy and repair infrastructure.

His campaign has released several digital ads aimed at young people that mention climate, mostly in the context of other issues. An online youth engagement meeting focused heavily on jobs and the economy.

More than 10 million early votes in US presidential election – study

US voters have cast more than 10 million votes for the Nov. 3 presidential election, significantly outpacing the early vote in 2016 and suggesting a ...
Politics
1 year ago

Biden's campaign released a television ad focusing exclusively on climate, but it was aimed at farmers rather than young people.

"Joe Biden recognizes that our country is grappling with four intersecting crises — the raging pandemic, economic collapse, persistent racial injustice, and existential threat of climate change — and is exactly why he has outlined an integrated, ambitious, and bold agenda to ensure we tackle these crises together," said spokesman Matt Hill.

President Donald Trump has sought to frame Biden's climate plans as a radical leftist agenda that would cost too much and hurt economic growth. By contrast, his campaign has said it would continue to ease business restrictions to boost the economy.

His campaign has also invoked the environment, arguing that Trump's pro-industry policies have led to lower carbon emissions.

"President Trump’s record on the environment proves you can have energy independence and a clean, healthy environment without destroying the economy, overregulating, or burdening American taxpayers," Trump spokeswoman Samantha Zager said. "The president will continue to rely on policies of innovation and competition.”

US President Donald Trump and his Democratic challenger Joe Biden will court early voters as their campaigns step up events ahead of their final ...
News
1 year ago

The emissions reductions noted by Trump's campaign were driven largely by the retirement of coal plants. Air quality also continued to improve under Trump following the same trajectory as in previous Republican and Democratic administrations.

It would be a mistake to ignore young voters' concerns about the environment, said Ben Wessel, head of the youth outreach group NextGen America founded by Steyer. Stronger campaign messages on climate could draw more young voters to the polls, he said.

That could be the case for Goldstene's student Michaela Gallagher, 24. Alarmed by climate change, she says she is leaning toward casting a ballot for the Democrat because she feels he will do more than Trump for the environment. But she also might vote for a third-party candidate or skip voting.

"I'm all over the place about it," she said.