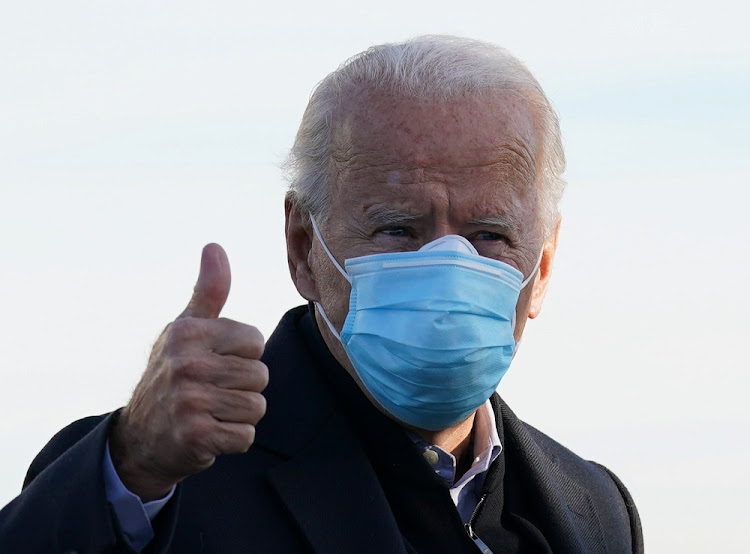 Democrat Joe Biden said on Wednesday he was headed toward a victory over President Donald Trump in the US election after claiming the pivotal Midwestern states of Wisconsin and Michigan, while the Republican incumbent opened a multi-pronged attack on vote counts by pursuing lawsuits and a recount.

Wisconsin and Michigan were giving Biden, the former vice president who has spent five decades in public life, a critical boost in the race to the 270 electoral votes in the state-by-state Electoral College needed to win the White House. Trump won both states in his 2016 election victory. Losing them would narrow his path to securing another four years in office.

"And now after a long night of counting, it's clear that we're winning enough states to reach (the) 270 electoral votes needed to win the presidency," Biden, appearing with his running mate Kamala Harris, said in his home state of Delaware. "I'm not here to declare that we've won. But I am here to report that when the count is finished we believe will be the winners."

Betting market odds on the US presidential election have begun to tighten once again after flipping in favour of Republican President Donald Trump ...
Politics
1 year ago

Trump's campaign asked to intervene in a pending US Supreme Court case over whether Pennsylvania, another key state that was still working its way through hundreds of thousands of mail-in ballots, should be permitted to accept late-arriving ballots sent by Election Day.

His campaign also said it would request a recount in Wisconsin and added that it had filed lawsuits in Michigan and Pennsylvania seeking to halt vote counting, arguing that officials had failed to allow fair access to counting sites.

Taken together, Trump's legal maneuvers amounted to a broad effort to contest the results of an election yet to be decided a day after millions of Americans went to the polls during the coronavirus pandemic that has upended daily life. They followed Trump's early-morning attacks on the integrity of the vote, as the president falsely claimed victory and suggested without substantiation that Democrats would try to steal the election.

Biden said: "Every vote must be counted. No one's going to take our democracy away for us, not now, not ever. America's come too far, America's fought too many battles, America has endured too much to ever let that happen."

Trump is trying to avoid becoming the first incumbent US president to lose a re-election bid since George H.W. Bush in 1992.

Wisconsin law allows a candidate to request a recount if the margin is below 1%, which the Trump campaign immediately said it would do.

In response to the Michigan lawsuit, Ryan Jarvi, a spokesman for the state attorney general, said the elections had been "conducted transparently".

Voting concluded as scheduled on Tuesday night, but many states routinely take days to finish counting ballots. There was a surge in mail-in ballots nationally amid the pandemic. Other closely contested states including Arizona, Nevada, Georgia and North Carolina were still counting votes, leaving the national election outcome uncertain.

At the moment, not including Wisconsin, Biden leads Trump 243 to 213 in Electoral College votes, which are largely based on a state's population.

The contentious aftermath capped a vitriolic campaign that unfolded amid a pandemic that has killed more than 233,000 Americans and left millions more jobless. The country has also grappled with months of unrest involving protests over racism and police brutality.

Supporters of both candidates expressed anger, frustration and fear with little clarity on when the election would be resolved.

Trump led in Georgia and North Carolina, while his lead dwindled in Pennsylvania. Without Wisconsin and Michigan, he would have to win all three as well as either Arizona or Nevada, where Biden was leading in the latest vote counts.

Biden would be only the second Democratic presidential candidate to win Arizona in 72 years. Trump won the state in 2016.

In Pennsylvania, Trump's lead dropped to around 320,000 votes as officials gradually worked their way through millions of mail-in ballots, which were seen as likely to benefit Biden. Trump campaign manager Bill Stepien called the president the winner in Pennsylvania, even though state officials had not completed the count. Biden said he felt "very good" about his chances in Pennsylvania.

Brazil President Jair Bolsonaro on Wednesday refrained from commenting on a potential US election victor, but reiterated his support for Donald ...
News
1 year ago

Legal experts had warned the election could get bogged down in state-by-state litigation over a host of issues, including whether states can include late-arriving ballots that were mailed by Election Day. Both campaigns have marshaled teams of lawyers in preparation for any disputes.

In the case in which the Trump campaign sought to intervene, the Supreme Court previously allowed Pennsylvania to move forward with a plan to count ballots mailed by Election Day that arrive up to three days later.

But some conservative justices suggested they would be willing to reconsider the matter, and state officials planned to segregate those ballots as a precaution.

Ahead of the election, Trump had said he wanted his latest U.S. Supreme Court appointee, Amy Coney Barrett, confirmed by the Senate in case the court had to hear any electoral dispute. Democrats had criticized the president for appearing to suggest he expected Barrett to rule in his favor.

Trump has repeatedly said without evidence that widespread mail-in voting would lead to fraud, although U.S. election experts say fraud is very rare.

Trump continued to make unsubstantiated attacks on the vote-counting process on Twitter on Wednesday, hours after he appeared at the White House and declared victory in an election that was far from decided. Both Facebook and Twitter flagged multiple posts from the president for promoting misleading claims.

"We were getting ready to win this election. Frankly, we did win this election," Trump said before launching an extraordinary attack on the electoral process by a sitting president. "This is a major fraud on our nation. We want the law to be used in a proper manner. So we'll be going to the U.S. Supreme Court. We want all voting to stop."

Trump provided no evidence to back up his claim of fraud and did not explain how he would fight the results at the Supreme Court.

The election will also decide which party controls the U.S. Congress for the next two years, and the Democratic drive to win control of the Senate appeared to be falling short. Democrats had flipped two Republican-held seats while losing one of their own, and five other races remained undecided - Alaska, Michigan, North Carolina and two in Georgia.