Hawks on hunt for details after officials query tender 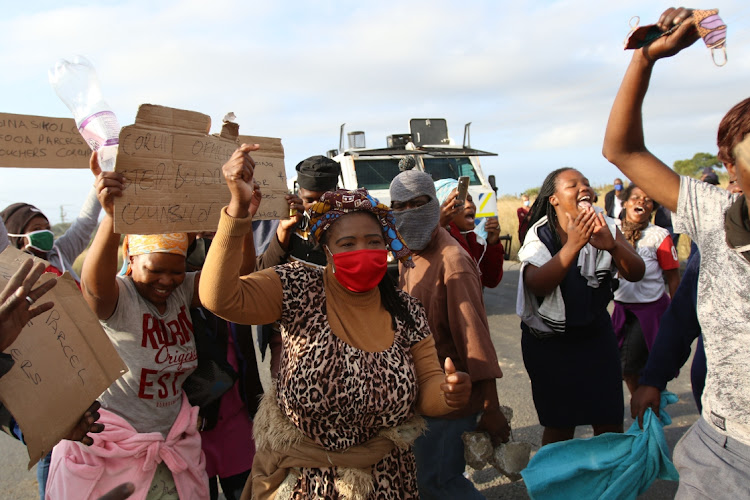 Protesters from Chicken farm and New Life and close a Mdantsane access road during protests over vouchers and food parcels.
Image: MICHAEL PINYANA

The Hawks are investigating Buffalo City Metro’s (BCM) Covid-19 food voucher programme after senior officials in the municipality queried the tender and how it was awarded.

DispatchLIVE reported last week that 18 companies, mostly those with a national footprint, were named as the only retail stores in BCM where residents could redeem the vouchers.

Suspicions were raised among BCM insiders because some companies were only registered on the treasury’s central supplier database (CSD) on the closing date of the tender, while others attended an April 20 briefing a day before the tender was advertised.

Senior officials within the Buffalo City Metro have called into question the awarding of the metro’s R30m food voucher tender, which supplied R750 ...
Politics
1 year ago

The Dispatch has seen a letter from the Hawks to BCM city manager Andile Sihlahla and acting supply chain head Mercy Fraser in which the crime-busting unit asks them to provide documents like the food voucher advertisement, the register for the tender briefing and tender documents for all service providers that won the contracts.

A source within BCM said the Hawks wanted to know how the companies that benefited from the voucher programme received  work from the metro.

“What is needed is for these companies that were awarded work to say who called them before the tender could be advertised,” the source said.

“The answer needs to explain why they took part in a briefing before the actual tender. They should know that this was wrong.”

The source said the Hawks wanted everything that had to do with the food voucher tender.

The UN has sounded an alarm on what Covid-19 has done to children globally, with SA no exception
News
1 year ago

“The Hawks have also called for orders, invoices and payment schedules to know who got what and when. Despite 40,000 people being meant to benefit, scores did not get [vouchers] because the  system was flawed from the word go.”

Hawks provincial spokesperson Lwando Zenzile confirmed that an inquiry into the deal had been opened.

“No case has been opened but [there is] an inquiry on the food vouchers,” Zenzile said.

“It  goes without saying that we will co-operate, as we always have, with law enforcement agencies should they deem it fit to exercise investigations over this process,” Ngwenya said.

He said the processing of the voucher relief programme was conducted and guided by prescripts of the legislation and a legal opinion was obtained which confirmed that the necessary conditions and requirements had been satisfied. Expenditure was not irregular, he added.

“The municipal financial management legislation was applied, meaning there were no monetary exchanges, hence we opted for the voucher system.

Hungry pupils may get food vouchers after thieves hit schools

A plan by the department of basic education to dish out food vouchers to pupils who are forced to stay at home during lengthy school closures could ...
News
1 year ago

“We cannot run away from the fact that this was an unprecedented, overwhelmingly enormous emergency process and as such, challenges were inevitable, but it must be emphasised that the overall programme was a resounding success.”

He said the metro was in a position to account for every bit of money spent at every store.

“We can track every invoice submitted including its value for money.”

The food voucher programme is not viewed with affection by all.

In April, unemployed Mdantsane residents Nonkululeko Madala, Nobuntu Mfeketho and Phumla Hlaba were devastated to learn they were not in line to get the R750 vouchers despite the R30m being made available.

The Eastern Cape is SA’s land of hunger

Jobless people in the country’s most impoverished province join the growing social grant queues before dawn on empty stomachs, having run out of food ...
News
1 year ago

Mfeketho said: “When President Cyril Ramaphosa called for the poor of the poorest to benefit from the vouchers, that did not mean that those who are connected should get two or three voucher parcels at the expense of others.

“The Hawks must root out this corruption and those involved in this scandal must face the music.”

Madala said: “We were promised that these vouchers are still coming and until today we are waiting. Only six people who are close to the committee in this community got the vouchers.”

For a single mother like Hlaba, the R750 food voucher would have gone a long way.

“The pain of being ignored by the same leadership who knows your predicament is unbearable. I am staying in an old igloo house and that tells you that I am suffering and I have no money. The Hawks should fight for us.”