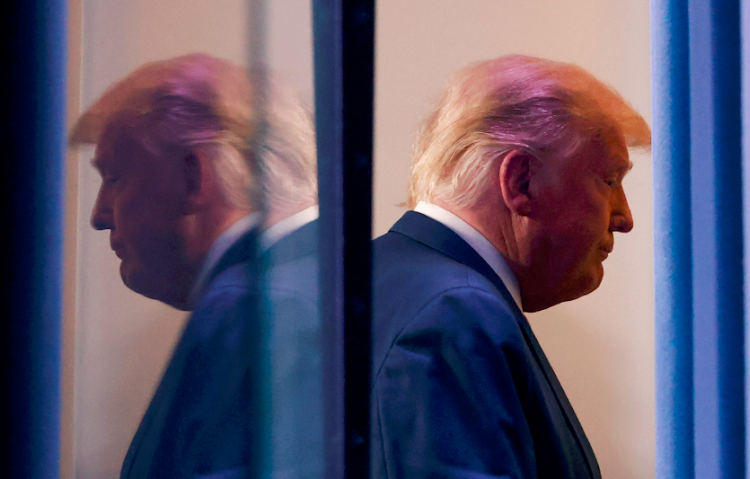 Trump's announcement that his staff would cooperate with Biden's represented a significant shift and was the closest he has come to admitting defeat.
Image: REUTERS/ CARLOS BARRIA

After weeks of waiting, President Donald Trump's administration on Monday cleared the way for President-elect Joe Biden to transition to the White House, giving him access to briefings and funding even as Trump vowed to continue fighting the election results.

Trump, a Republican, has alleged widespread voter fraud in the November 3 election without providing evidence. Although he did not concede or acknowledge his Democratic rival's victory on Monday, Trump's announcement that his staff would cooperate with Biden's represented a significant shift and was the closest he has come to admitting defeat.

Biden won 306 state-by-state electoral votes, well over the 270 needed for victory, to Trump’s 232. Biden also holds a lead of more than 6 million in the national popular vote.

The Trump campaign's legal efforts to overturn the election have almost entirely failed in key battleground states, and a growing number of Republican leaders, business executives and national security experts have urged the president to let the transition begin.

The president-elect has begun naming members of his team, including tapping trusted aide Antony Blinken to head the State Department, without waiting for government funding or a Trump concession. But critics have accused the president of undermining U.S. democracy and undercutting the next administration's ability to fight the coronavirus pandemic with his refusal to accept the results.

On Monday, the General Services Administration, the federal agency that must sign off on presidential transitions, told Biden he could formally begin the hand-over process. GSA Administrator Emily Murphy said in a letter that Biden would get access to resources that had been denied to him because of the legal challenges seeking to overturn his win.

That means Biden's team will now have federal funds and an official office to conduct his transition until he takes office on Jan. 20. It also paves the way for Biden and Vice President-elect Kamala Harris to receive regular national security briefings that Trump also gets.

US President Donald Trump's increasingly tenuous efforts to reverse his election loss to President-elect Joe Biden could be dealt a lethal blow on ...
News
1 year ago

The GSA announcement came shortly after Michigan officials certified Biden as the victor in their state, making Trump's legal efforts to change the election outcome even more unlikely to succeed.

Trump and his advisers said he would continue to pursue legal avenues but his decision to give Murphy the go-ahead to proceed with a transition for Biden's administration indicated even the White House understood it was getting close to time to move on.

"Our case STRONGLY continues, we will keep up the good ... fight, and I believe we will prevail! Nevertheless, in the best interest of our Country, I am recommending that Emily and her team do what needs to be done with regard to initial protocols, and have told my team to do the same," Trump said on Twitter.

'CLOSEST THING TO A CONCESSION'

A Trump adviser painted the move as similar to both candidates receiving briefings during the campaign and said the president's statement was not a concession.

The Biden transition team said meetings would begin with federal officials on Washington's response to the coronavirus pandemic, along with discussions of national security issues.

US President Donald Trump’s increasingly tenuous efforts to reverse his election loss to president-elect Joe Biden could be dealt a lethal blow on ...
Politics
1 year ago

“This is probably the closest thing to a concession that President Trump could issue," said Senate Democratic leader Chuck Schumer.

Murphy, who was appointed to the GSA job by Trump in 2017 and said she faced threats for not starting the transition earlier, told GSA employees in a letter that the decision to do so was hers alone.

"I was never pressured with regard to the substance or timing of my decision. The decision was solely mine," she wrote. The GSA had insisted that Murphy would "ascertain" or formally approve the transition when the winner was clear.

Representative Don Beyer, who led the Obama administration's transition at the Commerce Department in 2008, said Murphy's delay was "costly and unnecessary" and warned that Trump could still do great harm in his remaining time in office.

After a scathing court setback in Pennsylvania, President Donald Trump faces increased pressure from his fellow Republicans to drop his effort to ...
Politics
1 year ago

Top Democrats in the House and Senate on Monday warned that an executive order signed by Trump in October could result in mass firings of federal employees in the final weeks of his presidency and allow the Republican president to install loyalists in the federal bureaucracy.

The now formalized transition and Michigan's certification of Biden's victory could prompt more Republicans to encourage Trump to concede as his chances of overturning the results fade.

Top Republicans in Michigan's legislature pledged to honor the outcome in their state, likely dashing Trump's hopes that the state legislature would name Trump supporters to serve as "electors" and support him rather than Biden.

Trump has been consulting his advisers for weeks, while eschewing standard responsibilities of the presidency. He has played several games of golf and avoided taking questions from reporters since the day of the election.

Biden, who plans to undo many of Trump's "America First" policies, announced the top members of his foreign policy team earlier on Monday. He named Jake Sullivan as his national security adviser and Linda Thomas-Greenfield as U.S. ambassador to the United Nations. Both have high-level government experience. John Kerry, a former U.S. senator, secretary of state and 2004 Democratic presidential nominee, will serve as Biden's special climate envoy.

Joe Biden on Saturday reached the two-week mark since becoming president-elect, with President Donald Trump stinging from back-to-back setbacks in ...
Politics
1 year ago

The president-elect is likely to tap former Federal Reserve Chair Janet Yellen to become the next Treasury secretary, according to two Biden allies, who spoke on condition of anonymity to discuss a personnel decision that was not yet public.