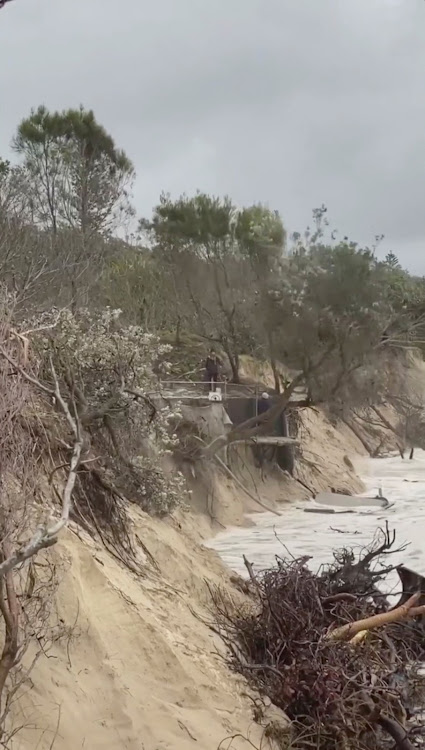 A tree collapses along the coastline of Byron Bay, New South Wales, Australia, on December 14, 2020, in this still image from video obtained via social media.
Image: REUTERS/ MARC WILSON

Main Beach at Byron Bay, a popular tourist destination in northern New South Wales state and home to Hollywood A-listers such as Chris Hemsworth, has all but disappeared, Byron Mayor Simon Richardson told media on Monday.

Television news footage showed a concrete walkway along the beach collapsing into the sea.

“What we've got here is yet another event. An extreme weather event coming on the back of climate change that our community's dealing with. It's about the fourth or fifth major event in the last couple of years.”

The wet conditions contrast with the fierce bushfires that ravaged world heritage listed Fraser Island in Queensland state in recent weeks. On Monday, fire evacuation points on Fraser Island were underwater due to high tides and huge waves.

The heavy band of rain and wild winds, generated by an intense low pressure system off the southern Queensland coast, battered the heavily-populated border regions between NSW and Queensland for the third day bringing more than 700 millimetres (27.6 inches) of rain in some places over 48 hours.

Australia's Bureau of Meteorology (BoM) warned coastal erosion, hazardous rain and huge waves off the coast would continue through Monday and urged motorists to stay off the roads.

Australia is expecting a wetter than usual summer this year due to a La Nina weather phenomenon, typically associated with greater rainfall and more tropical cyclones, though a major heatwave had sweltered the east just weeks ago.