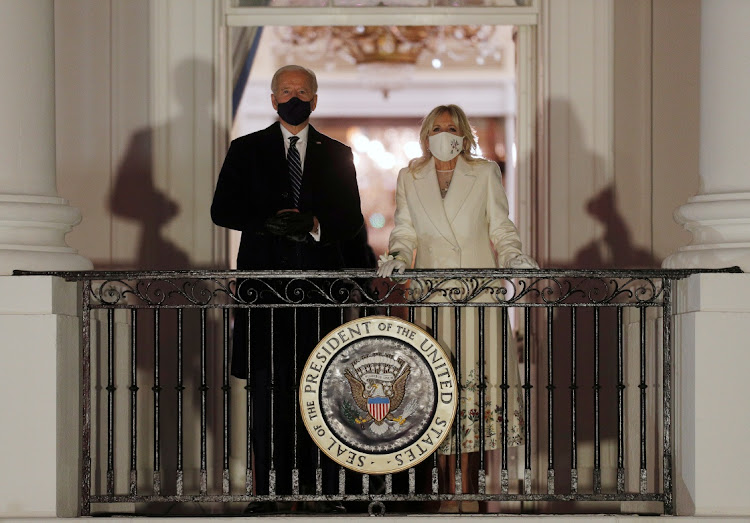 US President Joe Biden and first lady Jill Biden watch fireworks from the balcony of the White House after his inauguration as the 46th President of the United States, US, on January 20, 2021.
Image: REUTERS/ TOM BRENNER

After taking the oath of office and a brief dash to shake some hands, Joe Biden made it safely to the White House in a barricaded city guarded by more than 25,000 troops and devoid of the hundreds of thousands of spectators who normally throng to the quadrennial ritual.

The unprecedented precautions ensured the new US president and Vice President Kamala Harris took office free of incident in a ceremony outside the US Capitol, two weeks to the day after a mob attacked the building in a failed attempt to keep Congress from certifying their victory.

After being driven from the Capitol in a slow motorcade, Biden briskly walked the last block from the Treasury to the White House, unexpectedly greeting some invited and screened guests and members of the news media along the way in a highly secured area. Harris walked part of the way to her office in the Eisenhower Executive Office Building next door to the White House.

“Just days after a riotous mob said they could use violence to silence the will of the people, to stop the work of our democracy, to drive us from this sacred ground, it did not happen. It will never happen. Not today, not tomorrow, not ever,” Biden said in his inaugural speech at the Capitol.

Some right-wing extremist groups had vowed to disrupt Biden's inauguration after the Jan. 6 attack, but only scattered protests emerged on Wednesday.

The US Secret Service, which ran the security operation, reported one arrest, a person who tried to enter a checkpoint to a restricted area near the White House carrying loose, unregistered ammunition. DC Police and Capitol Police reported no arrests.

At least 217 people were arrested in 2017 during violent protests of former president Donald Trump's inauguration day.

A small group of protesters stood outside the security perimeter. “If Joe Biden wants to take America to hell, go right ahead!” one shouted through a bullhorn. 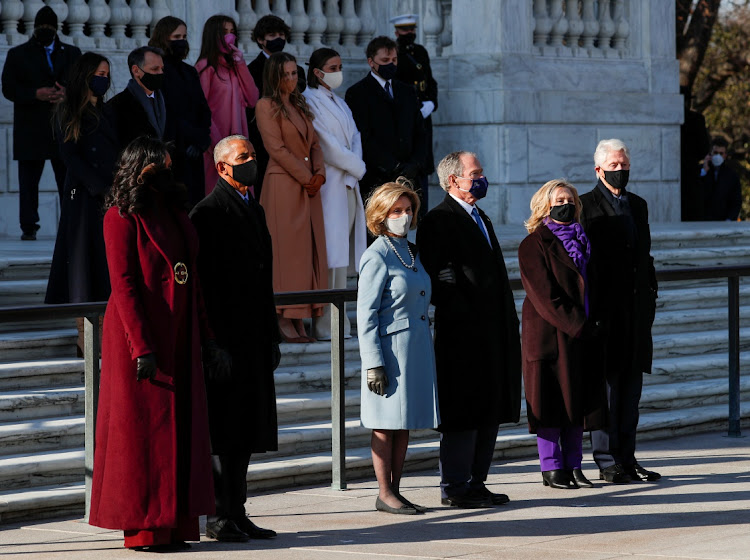 Elsewhere downtown, protester Gordon Diehl said he was disappointed that more who shared his views had not come out. “Hoping to see more Trump supporters at least, keep on fighting or something,” the Michigan resident said.

At Black Lives Matter Plaza near the White House, a centre of racial-justice protests in the summer, a sparse crowd cheered when Biden mentioned in his speech that Harris would be the first Black vice-president.

“I felt like a ton of weight was lifted from my shoulders,” said Tiffany Wade, who travelled with her daughter and mother from Alabama to witness the inauguration.

Earlier on Wednesday, outgoing President Donald Trump left the White House for the final time, his helicopter flying over thousands of American and state flags planted in the National Mall. The banners stood in for the hundreds of thousands of people who gathered for past inaugurations to watch the proceedings on big-screen televisions.

Two demonstrations that had been planned along the parade route to the White House had been cancelled, according to the National Park Service.

Joe Biden sworn in as US president, takes helm of deeply divided nation

Biden, 78, became the oldest US president in history at a scaled-back ceremony in Washington that was largely stripped of its usual pomp and ...
Politics
1 year ago

The security precautions, along with a coronavirus pandemic that has prompted many to avoid public gatherings, left city streets largely empty.

“It's, frankly, painful to see this, the whole city shut down,” former Republican Senator Jeff Flake told reporters as he arrived at the Capitol.

On Tuesday, Pentagon officials said a dozen National Guard members had been removed from inauguration duty after troops were screened for potential ties to right-wing extremism and troubling text messages.

Residents of the ancestral Indian village of Kamala Harris celebrated her inauguration as US vice president on Wednesday by setting off firecrackers ...
News
1 year ago

Bridges between Virginia and downtown Washington have been closed, as were downtown Metro stations.

Some intercity bus services and passenger trains were suspended.

With inaugural balls and other parties previously cancelled due to the coronavirus pandemic, the event has taken on a sombre tone in Washington.

After Twitter and Facebook suspended accounts calling for violence, organising activity has been pushed onto unmoderated channels such as 8kun.

“The FBI appears to be taking these threats seriously, but disciplined lone wolf actors, regardless of ideology, are extremely difficult to track,” said Daniel Jones, president of Advance Democracy, a non-profit research group.