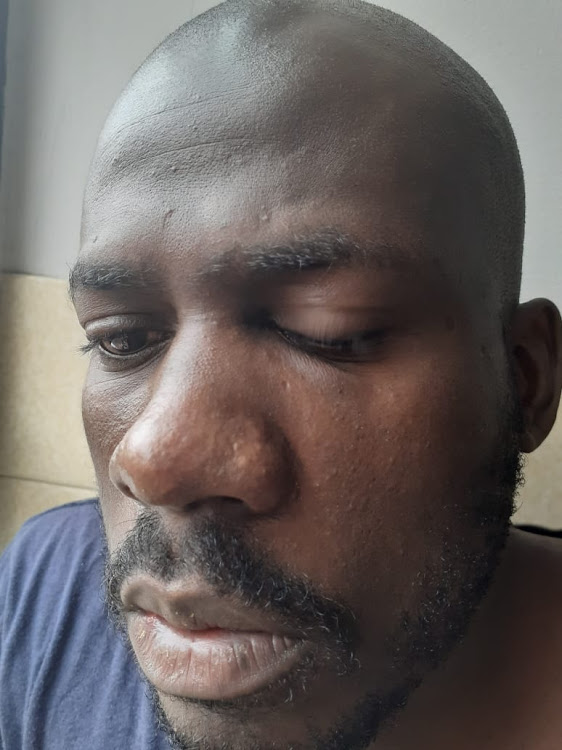 Melvin Ngobeni was allegedly assaulted by a group of bikers on their way to Gauteng from Mpumalanga.
Image: Supplied

Three men have been left traumatised after a group of motorcyclists assaulted them after a collision in Mpumalanga.

The assault was caught on video and shared on social media.

Tshego Ngobeni, whose husband Melvin is one of the men who were allegedly assaulted, said she saw the video on Twitter.

Recounting what they told her, she said her husband and brother in-law had been travelling from Mpumalanga to Gauteng after attending a funeral on Saturday.

“On their way back to Gauteng, on the N4 around Machadodorp and Belfast, they were hit by a biker at the back [of the vehicle]. They got out to check on the biker.

“While they were checking on the biker, other bikers then pounced on them and started beating them up - kicking them and even beating them with helmets,” Ngobeni said.

“My husband sustained the most injuries. He has lacerations on his face, he was scratched on his elbows and his knees were bruised.”

TimesLIVE was not able to confirm the condition of the biker involved in the collision.

According to Ngobeni, her husband and brother in-law managed to run away and got into their car. The bikers were on their heels and followed them as they drove off.

My husband called me and all I could hear was ‘Baby, call the police - these people want to kill us!’

“My husband called me and all I could hear was ‘Baby, call the police - these people want to kill us!’” she said.

The two men took an off-ramp that led them to a police station. The bikers were still following them.

“As they got to the police station, the bikers took out guns and threatened to shoot everyone. They ran over a policeman who was at the gate.

“At this point my husband got scared and he ran into the nearby bushes to hide. My brother-in-law ran into the police station.”

She said her husband and the entire family suffered emotional trauma as a result of the incident.

“I personally am suffering from anxiety attacks and I could not sleep for two days. It’s affecting all of us.”

She said the family was considering filing a civil suit against the bikers.

Black people will never be free in their OWN land
This happened today on the N4 just before the shell garage in machadodrop
White men were attacking black people in their cars
My brother took the video and he was also attacked pic.twitter.com/TJtca4IkOT

Mpumalanga police spokesperson Brig Leonard Hlathi confirmed that a case of assault had been opened.

“These horrifying scenes are said to have occurred on Saturday 23 January at Machadodorp policing area.”

“According to reports, two occupants in a motor vehicle were allegedly driving on the N4 road near Machadodorp.

“It is said that the driver of the vehicle tried to overtake a truck but noticed that it was unsafe to do so. He then drove back to his lane and reportedly collided with a motorbike, forcing it off the road.

“The driver is said to have stopped his vehicle but unfortunately he was assaulted by a group of men, and due to the hostility, as well as [the] continuous assault experienced from the suspects, the two occupants feared for their lives and drove from the scene to Belfast police station to get help - but their assailants followed them.

“Upon arrival at the police station, a police officer on standby noticed the two people who entered the station while screaming for help and realised that they were being followed by a group of men on motorbikes as well as a white bakkie.

A dramatic Fast & Furious-type scene unfolded in the Western Cape town of Porterville at the weekend after a man stole a truck and sped through the ...
News
2 months ago

“The officer came closer in an attempt to understand what was going on, but was reportedly bumped by the said bakkie.

“Other members of the station intervened as well and attempted to seize the bakkie that nearly took the life of a police officer, but the driver thereof as well as the other men became aggressive towards the members and speedily fled from the police station,” Hlathi said.

'One of them hit me too'

Vusi Caleb, the man who recorded the incident on video, said he saw a group of bikers assaulting the two men.

“I had seen them earlier at a Caltex garage. They were all in a good mood. I then saw them again when they were assaulting the men who were travelling in a [VW] Golf 7. The car had been hit at the back.

“As the incident was unfolding, I decided to record a video. One of the bikers came charging at me and he hit me. He damaged my car,” Caleb said.

“I ran to the police to report the incident. While I was there, I saw the bikers chasing the men they had assaulted at the police station.”

He said the incident left him traumatised.

“I am diabetic and I also have high blood pressure. This stressed me a lot and my sugar level has been high since the incident took place. I have not gone out to do my job of transporting people.”

Innocent, yet dragged on social media

Wheels in the Sky bikers' club member Michael Longuiero told TimesLIVE that he was aware of the incident but was not involved in it.

His photo was apparently circulated on social media as one of the alleged attackers.

“I was not involved in this incident. I was not even there. I was at my home with my family. Yet me, my wife and my business are now being dragged into this and we are receiving death threats from random people,” he said.

Hlathi said a case of two counts of assault and malicious damage to property had been opened at Machadodorp.

The suspects would also face an additional case of attempted murder for driving into a police officer.

“Police management has vowed to ensure that the perpetrators are brought to book as this type of an attitude shows total disregard of the law and disrespect to officials who are mandated to uphold the law — hence the arrest of these individuals is imminent.”