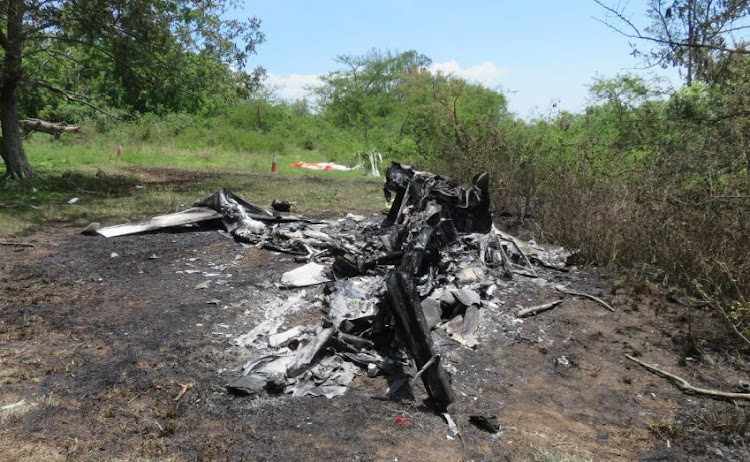 The wreckage of André van Heerden's plane in a pecan orchard next to Nelspruit Aerodrome.
Image: CAA accident investigation report

Eight people have died in aircraft crashes across SA in January this year, with the SA Civil Aviation Authority (SACAA) saying on Thursday it was concerned about a “spike in incidents”.

SACAA said it had recorded 14 aircraft crashes in January, with four of them resulting in loss of life. This was the most fatalities in a single month in more than 12 years.

The release of the figures came on the day a pilot of a light aircraft died in a crash on a farm outside Koster in the North West.

ER24 spokesperson Russel Meiring said that emergency services arrived on the scene shortly before midday “to find the aircraft's smouldering wreckage in a field”.

“Medics and fire personnel searched the area for any patients. After some time, medics found the body of a man under a part of the plane. Unfortunately, he had already succumbed to his injuries. Nothing could be done for him, and he was declared dead,” he said.

Mark Stoxreiter, the pilot killed in a helicopter crash last week, will always be remembered for his kindness and great sense of humour.
News
1 year ago

SACAA CEO Poppy Khoza said that while air transport remained “the safest among all modes of transport”, even one death was too many.

“With stringent regulations in place, coupled with layers of checks and balances, the expectation is that the measures inherent in the system, that is, both safety and security, should work as they are supposed to,” she said.

SACAA said it had not seen a spike in aircraft crashes and deaths in the country since October 2008, which led to the term, “Black October”.

In that month, 20 aircraft accidents were reported in the country, eight of them deadly. Twenty-six people died in those crashes.

Families of the four health-care workers and a pilot who were killed when a helicopter they were travelling in crashed in KwaZulu-Natal last week ...
News
1 year ago

“While the accident rate is not now at that level, it is quite concerning that we have had so many accidents in just one month. We cannot afford to have a recurrence of the October 2008 statistics, hence we sound warning bells to all operators to ensure strict adherence to aviation safety and security regulations,” said Khoza.

“The GASS and its implementation plan are tools that will span the 2020-21 to 2024-25 financial years and are aimed at curbing accidents in the private and recreational flying sector, commonly referred to as ‘general aviation’,” she said.

From what they have seen so far, the general aviation sector had not fully adopted the safety principles that are applied in the commercial scheduled operations or airline sector.

Just before he died in KZN helicopter crash, Joburg doctor was called in to save Jackson Mthembu’s life

On Thursday morning, anaesthetist Dr Kgopotso Rudolph Mononyane, was meant to leave Johannesburg’s Milpark Hospital as part of a medical crew that ...
News
1 year ago

This as the commercial airlines have not recorded a fatal accident in more than 30 years on South African soil.

“This is a record we are proud of and want the general aviation sector to emulate,” said Khoza.

She said while their probes into the recent crashes were still ongoing, preliminary findings showed that the crashes had occurred from the usual, common factors such as flight crew, aircraft operations, mechanical or engine failure and other factors.

“In effect, this means that there are no new or unknown aircraft accident causal factors. The causes have been the same since the beginning of air transport, more than a century ago. The main question remains, why do accidents continue when we know the causes? Could it be a matter of attitude and not necessarily aptitude?” Khoza asked.

She added that there was some recklessness on the side of some who held piloting licenses.

Boxer Kevin Lerena walked away with “minor injuries” after the helicopter in which he was training crashed on Saturday morning.
Sport
1 year ago

Khoza bemoaned a recent video which showed a helicopter seen flying recklessly as its pilot seemingly wanted to show off to his friends who were drinking on the ground.

Khoza said they were investigating the incident.

She asked those in the know to blow the whistle on any wrongdoers in the aviation industry.

“A series of events usually lead to an accident. Hence, we appeal to everyone to live by the mantra that ‘you see something unbecoming, you say something’, because that could save someone’s life, including yours,” Khoza said.

Despite the latest incidents, SA remains among the top compliant countries in matters of aviation safety and security oversight and administration.