Only a donkey cart can get coffin to grave 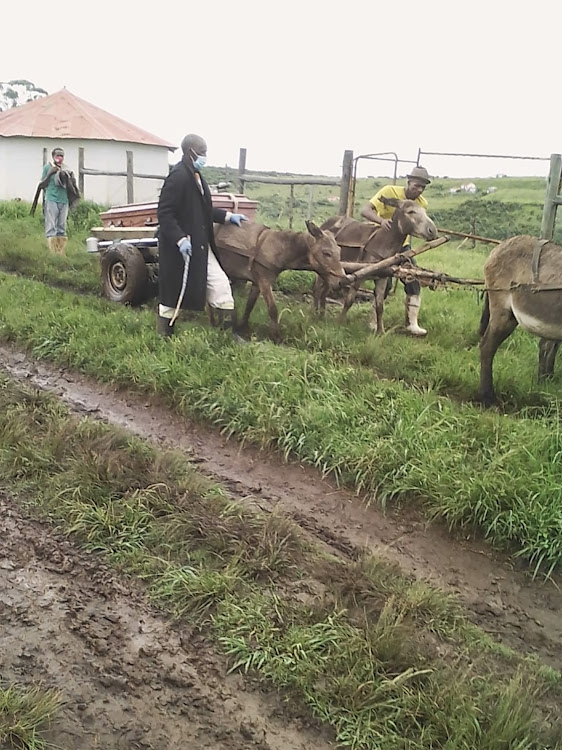 Roads in Nyumaga village in Centane are so bad that residents and mourners are forced to use a donkey cart to take coffins to the local gravesites when it rains.
Image: SUPPLIED

Roads in one Eastern Cape village are so bad that a funeral parlour has  to hire a donkey cart to take a coffin to the graveyard.

In some instances,  locals  even use ladders as stretchers to carry departed relatives to their graves. The coffins are simply too heavy to do otherwise.

The Covid-19 pandemic and its strict protocols mean burials have to take place quickly, but for years residents of Nyumaga village in Centane have been complaining  about the state of their roads.

That they have to use such drastic measures to lay their loved ones to rest is a disgrace, they told DispatchLIVE on Tuesday.

As testimony to the conditions they have lived with for decades, it took DispatchLIVE 40 minutes to drive the last 15km leading there.

Malibongwe Pikisa walked 5km to meet DispatchLIVE because the road is simply too treacherous where he stays.

On Saturday, the hearse and mourners again could not drive to the graveyard.

“When it rains people have to organise donkeys.

"No car can drive here. The roads have never been done. No contractor has ever been here. We really don't want people to protest because we don't encourage that, but we need the government to come and see this because they've never been here,” he said.

No bridges over these troubled waters

The woman in the video frame grab inches her way across a tumultuous and potentially deadly river, with her bag and jacket slung over her body,  on a ...
News
1 year ago

“This was the third time since late last year. We cannot drive the hearse through when it rains. People have to use planks and homemade carriers, and that is not  good for funeral parlours. It is much worse when it rains,” Tonisi said.

“Sometimes we arrive late for funerals. It’s a slow drive on those roads. A huge problem is faced by funeral parlours in the area.”

Tonisi said it took an hour for the donkey cart to carry the coffin to the gravesite.

“We have raised this issue. There has  never been anything done. Our agreement with clients is to take the body straight to the graveside but now we find ourselves having to hire donkeys. It’s really embarrassing to the families.”

Resident Sipho Gadudu told DispatchLIVE that last year they had to carry his neighbour’s body on a ladder to his grave because the coffin was too heavy and they had no car.

“Cars can't go down  some of these roads. Scholar transport struggles when it’s raining and our children end up walking to school. Cars are damaged every day,” Gadudu said.

It was meant to be the end of slashed tyres and near accidents on the R500 road in Kayser’s Beach, but the promised pothole repair project hit a ...
News
1 year ago

Pikisa said the villagers had lived with the road problem since the dawn of democracy.

“Cars have to be parked far away and people walk to their events,” he said.

Though he complimented government for rolling out electricity in the area,  road conditions remained abysmal.

He said the matter had been reported to Mnquma municipality, but no action had been taken to date.

“An official came to inspect the road  and said it would be done by April last year. Then we were told the equipment to carry out the work had been damaged. We are always told about budget constraints.

“People from town have to use wheelbarrows to transport their groceries from the taxi stop. No vehicle wants to drive here.”

“Mnquma municipality shares the pain endured by the affected residents due to the poor state of some of our rural roads, and the challenges of mobility the situation brings,” he said.

“In September we announced the purchase of a brand new fleet of yellow plant [equipment] such as trucks and tippers, a TLB and a caterpillar to improve our rural roads network.

"As we speak, our engineers and fleet are scattered all over Centane as part of an extensive rural roads network maintenance plan spread over 40km of road. It is worth millions of rand.”