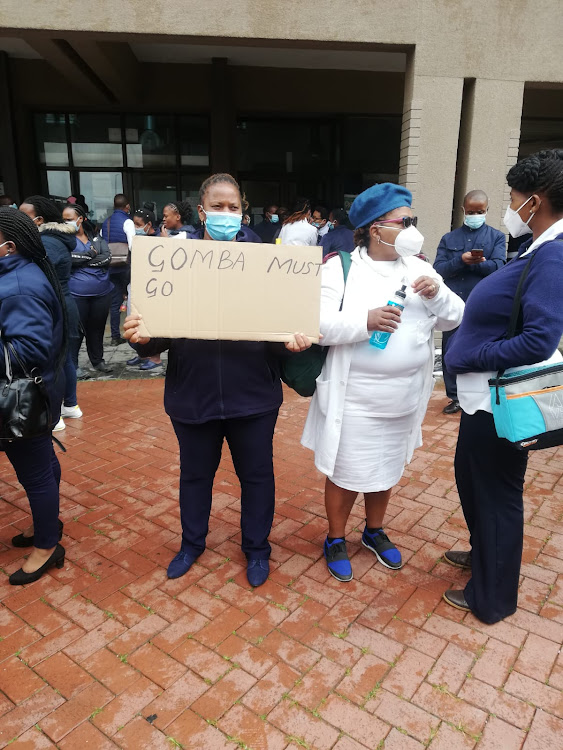 Dozens of healthcare workers whose contracts are coming to an end in March downed tools in Bhisho on Tuesday as they demanded to be absorbed into the system.

The workers played a pivotal role in the fight against Covid-19 in the province.

The protesters seemed to put the  blame squarely on the shoulders of beleaguered health MEC Sindiswa Gomba. “Gomba must go,” read one placard as the workers vented their frustration during the protest.

A representative of the protesting workers said there were hundreds of vacancies that remained unfilled across the province.

According to him, the province is facing a shortage of hospital staff.

“Some nurses retired and some of those posts have not been filled. The senior managers told us that the money is there, so we do not understand why they do not employ people permanently,” he added.

He claimed that senior managers of the department promised the workers' delegation to discuss the issue of the contracts at length and get back to them next Monday.

However, provincial health department spokesperson Sizwe Kupelo on Tuesday told DispatchLIVE that the department had no budget to permanently employ the healthcare workers.

More than 100 people contracted to the Eastern Cape health department will be out of work at the end of March. The 123 are BSc health promotion ...
News
1 year ago

“The nurses were given 12-month contracts through the disaster fund budget. Their contracts are coming to an end next month. We issued communication advising them of lapsing of the contracts,” said Kupelo.

“There are internal processes that are being followed but there is currently no budget. We cannot keep people when there is no budget ... the Public Finance Management Act would have been contravened if we were to do that.”

Last week, DispatchLIVE reported that more than 100 people contracted to the Eastern Cape health department would be out of work at the end of March.

The 123 contractors are graduates who have assisted the department in its Covid-19 response across the province.