Souls are bared in struggle for redemption tale 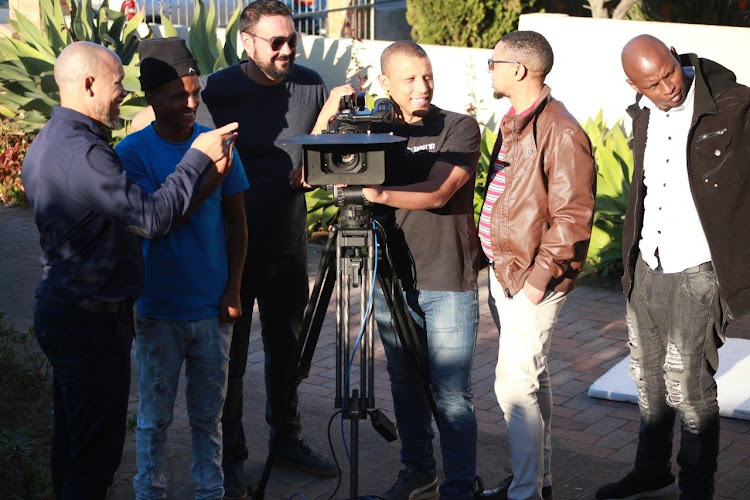 BEHIND SCENES: Nelson Mandela Bay filmmaker Mikale Barry's (back, with dark sunglasses) latest film, 'Die Maskers van Verlossing' ('The Masks of Redemption'), shot in the city's northern areas, is a product of his company In Motion Media and Arts Projects
Image: SUPPLIED

Eastern Cape filmmaker Mikale Barry is determined to create a social discourse about the way ordinary people view each other, and to highlight the lengths they are willing to go to just to get what they want.

Barry showcased his latest movie, "The Masks of Redemption" released this year at the inaugural Buffalo City Film Festival on Thursday.

Speaking to the Dispatch this past weekend, Barry said the short film follows the struggles of members of a suburban community in a lower-middleclass part of the city in present-day South Africa.

The film’s protagonist, Xaviour, is a preacher who tries his best to encourage and uplift the spirits of those who look up to him.

However, he is targeted by an ambitious  person in the parish who is determined to win the favour of the parishioners in his quest for power and prestige.

Barry, who was born in Cape Town but relocated to Gqeberha (formerly Port Elizabeth) with his parents at a tender age, developed an interest in filmmaking while he was young.

He has a post-graduate degree in teaching but he decided to follow his passion.

Barry explained that his movie dealt with morality issues in communities.

That is the thing I always had in mind — what is wrong and what is right, how people perceive each other. Everybody has a side, whether its good or bad

“That is the thing I always had in mind — what is wrong and what is right, how people perceive each other. Everybody has a side, whether its good or bad,” Barry explained.

“The movie is about a priest who goes about his work in the community but he ends up taking money from the community, and is caught for that.

“There are scenes that deal with domestic violence — the cop that catches the preacher has a dark secret because he is abusive to his wife and his personality is that of an ambitious guy.

“We also have a scene that deals with power relations among people — the extent we'll go to at the expense of other people in a world where we need to push to be where we need to be, and some people go about doing that in a bad way.”

He said the entire process of making movies inspired his body of work and now he was trying to develop a story with a completely different dynamic.

“As a filmmaker my films can't focus on one particular narrative. So I'm trying to create a voice that doesn't reflect a stereotype of coloured people in SA, but a vibe with an international attachment to the stories that I tell."

Barry said concerted efforts were needed to mobilise filmmakers in the province to establish a  thriving local film industry.

Top filmmakers in SA are set to bring in their expertise at the inaugural Buffalo City film festival, which will be hosted virtually from February ...
News
1 year ago

“Most of our filmmakers get exported to Johannesburg and international companies. Generally we have a culture of not supporting our own films. But with the Afrikaans community, there's a direct market where they promote their cultural iconography.

“Filmmaking can generate an income for the province, like paying for locations to be used, and that can generate a lot of stimulus for the economy over here,” said Barry.