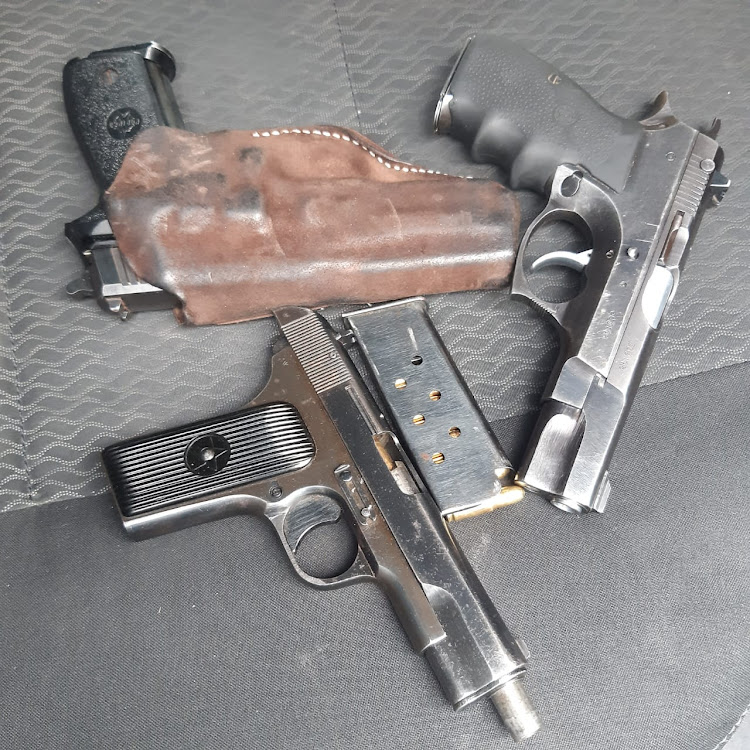 Three firearms were confiscated from the suspects after they allegedly assaulted a motorist.
Image: SAPS

Three gun-toting suspects were arrested after they allegedly fired their pistols and assaulted a motorist in Nyanga, Cape Town, on Thursday.

Police officers responding to information that a shooting had occurred in Sonwabile Drive in Crossroads, Nyanga, came across a white VW Polo.

He told them that he was assaulted by three men driving a white Toyota Corolla.

While the victim was taken to a nearby hospital by emergency services, the officers continued to search for a vehicle matching the description given by the driver.

As one Jeffreys Bay family was mourning the fatal shooting of their son, another resident of the town made his first court appearance in connection ...
News
1 year ago

They spotted the vehicle in Eisleben Road and followed it to a garage in Govan Mbeki Road, Browns Farm, where they found the three occupants in the vehicle, each armed with a firearm.

Van Wyk said two of the firearms were licensed while the third suspect’s firearm licence had expired.

All three were arrested and detained for discharging a firearm in a residential area, with the third suspect also charged for the possession of an unlicensed firearm and ammunition.

Spinning, attacking police officers and vehicles and a fatal shooting
News
1 year ago

Van Wyk said the firearms were sent for ballistics testing to determine if they were used in the commission of a crime.

The suspects – aged 41, 38, and 33 – were expected to appear in the Athlone magistrate's court once they were charged.