'We are all confused,' Malema's lawyer tells court as he grills cop who first investigated assault claim 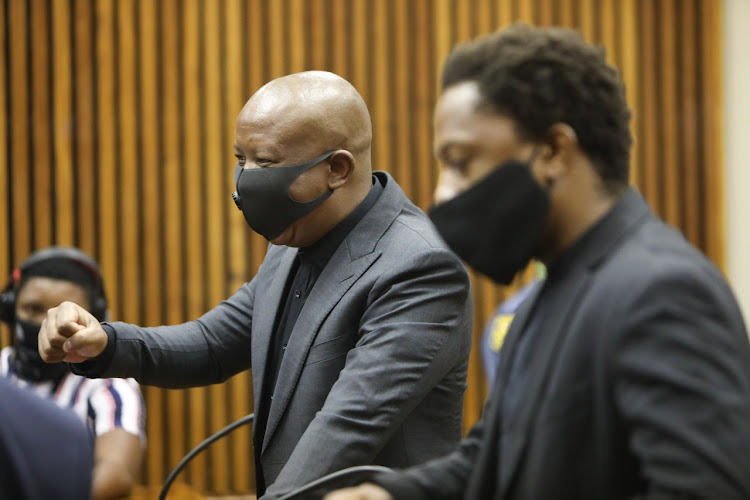 EFF leader Julius Malema and party MP Mbuyiseni Ndlozi in the Randburg magistrate's court in Johannesburg on Wednesday, where they are facing charges of assaulting a police officer at the 2018 funeral of Winnie Madikizela-Mandela.
Image: Alaister Russell/The Sunday Times

A retired police officer who initially investigated the common assault case against EFF leader Julius Malema and MP Mbuyiseni Ndlozi was grilled on Wednesday over claimed discrepancies in his evidence.

Col Charles Seanego, who was a Lt-Col at the SAPS for 42 years, was on Wednesday called to testify against Malema and Ndlozi.

The pair are standing trial at the Randburg magistrate's court, each facing a charge of common assault stemming from an incident involving Col Johannes Venter at the 2018 funeral of struggle stalwart Winnie Madikizela-Mandela in Fourways.

Malema and Ndlozi have pleaded not guilty to the assault charge, saying it was part of a political agenda.

Col James Bronkhorst told the Randburg magistrate's court on Tuesday that, based on the information received and years of experience, he was ...
News
1 year ago

He told the court that he was informed of a high-profile case registered at the Douglasdale police station.

He was investigating another case at the time.

He said he was told the case needed further investigation, and that witnesses and video footage were outstanding — so he went to the Fourways Memorial Park cemetery to request video footage.

When he received it, he sealed it.

“I then took it to the high tech office,” he said.

He said all the other documents were allocated to other members.

The court heard during cross-examination that one of the statements he had deposed to did not have a date.

When asked when he had made the statement, Seanego said he did so on March 20 2019.

“I put it to you that dates are important when it comes to the chain of events,” defence lawyer Laurence Hodes SC said.

“When we talk to date and time we need to remember what happened and the recording of the seal numbers,” Hodes added.

In one of his statements, Seanego said he had received two discs containing video footage of the incident.

“Both footage discs were sealed and not tampered with,” the statement read.

Seanego said he received the first disc from the Fourways Memorial Park and the second from Col James Bronkhorst.

Hodes pressed him on why he did not record it in his statement that he had sealed the discs in front of the people he got them from.

“When you deposed to your statement some time later you did not mention that you sealed it in front of [Bronkhorst]," he said.

Mbalula on his relationship with Malema: ‘We shared a good friendship, and that still remains’

They may not always see eye-to-eye when it comes to politics, but the friendship between transport minister Fikile Mbalula and EFF leader Julius ...
News
1 year ago

Seanego admitted to having omitted to mention that he had done this.

“It's unfortunate that I have to put it to you [that] it is the most basic statement that a first-year constable would make, to say, 'I received an item, booked it in SAP13 with [such] reference numbers.'

“With 42 years of experience, it's inexcusable that you never recorded it, sir,” Hodes said.

Seanego was also grilled for not taking the exhibits to the cyber crime investigating unit in Pretoria immediately after receiving them. He told the court that he kept one of the discs from May 4 to May 10 before he took it to Pretoria.

The court heard that he did not register the discs in what is known as SNP13 — a book where exhibits are recorded — on the day he received them.

“When you wanted to take it for analysis, you signed it in and out of the SNP13,” Hodes said.

He was also asked when he sent the discs to Pretoria.

“We are all confused,” Hodes told him.