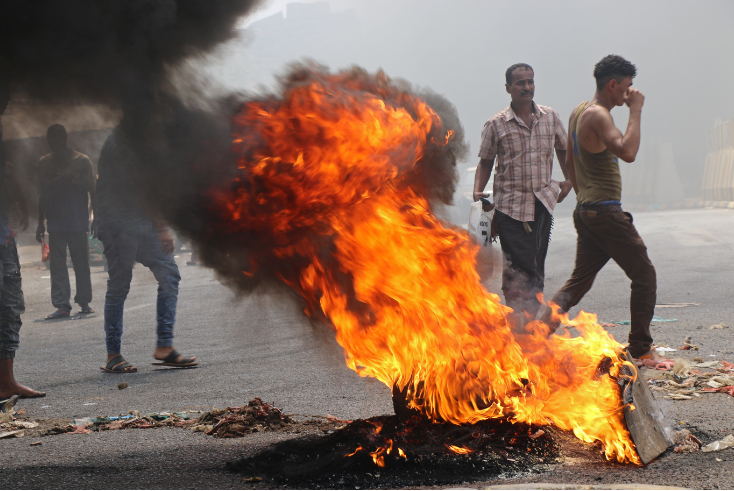 Protesters block a street with burning tires after the Yemeni Riyal has severely plunged against foreign currencies, in Aden, Yemen on September 2 2018.
Image: REUTERS/Fawaz Salman

Yemen's Prime Minister Maeen Abdulmalik and other members of the internationally recognised government remain holed up inside the building, two Yemeni officials said.

Most of Aden is controlled by forces of the United Arab Emirates-backed separatist Southern Transitional Council (STC), which had fought the government of Abd-Rabbu Mansour Hadi in the past.

Abdulmalik's cabinet was formed last year to unite the STC with Hadi's government and fulfil a Saudi aim of ending a feud among Riyadh's allies.

The two groups are the main Yemeni factions in a Saudi-backed alliance fighting the Houthis, who control the north, including the capital Sanaa. Tuesday's protest broke out over public services and after the government failed to pay salaries of retired soldiers, the witnesses said.

Planes carrying prisoners exchanged by the warring parties in Yemen are set to take off on Thursday in an operation to return about 1,000 men home ...
News
1 year ago

Footage on social media showed Aden's security chief, Mathar al-Shaebe, negotiating with a group of protesters and asking them to leave the security perimeter of Maasheq Palace.

The Houthis seized control of Sanaa in September 2014, forcing the then government into exile in Riyadh and Aden. In March the following year, the Saudi-led coalition launched a campaign to try to restore Hadi's government, carrying out thousands of air raids.

Tens of thousands have been killed, mostly civilians, and millions of Yemenis have been pushed to the brink of famine.Reuters