'King Zwelithini was a unifier, conservationist, philanthropist and a leader of all seasons' — Buthelezi 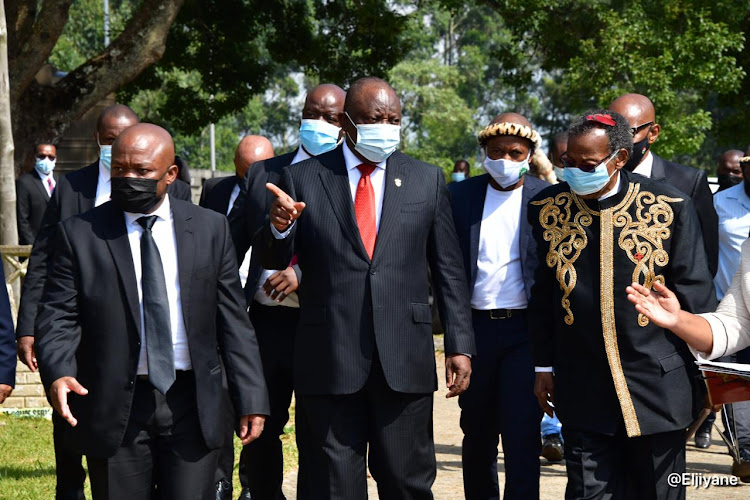 For close to five decades, King Goodwill Zwelithini ensured that the Zulu monarchy was not only an institution for ceremonial occasions but was also of value to the country’s public service, social cohesion and economic imperatives, traditional prime minister to the Zulu nation Prince Mangosuthu Buthelezi said on Thursday.

Speaking at King Zwelithini's memorial service at the KwaKhethomthandayo Royal Palace in Nongoma, Buthelezi said the Zulu monarch positioned himself well to respond to pressing issues of the day and championed causes that were not widely recognised or fashionable, but had a lasting social value.

“In a province and country faced with a myriad of social challenges, Isilo always used his influence as king to personify a moral high ground. Until the very last days of his reign, he remained a quintessential statesman, culturist, philanthropist, a patriot and an internationalist — a leader of all seasons. Isilo has been credited for not only transcending history by reviving and promoting age-old cultural heritage but also building a traditional governance institution that is compatible with democratic age.

“Well-renowned for championing the war against HIV and Aids, especially among the youth, and also recognising them as the future of the nation, was a strong passion for the reigning king. Many government leaders all over the world have acknowledged his efforts as a king,” Buthelezi said.

He said King Zwelithini launched the KwaZulu-Natal Public Peace Process because he understood the value of peace and social cohesion in the province, and the dynamics around political parties and the sensitivities of citizens.

“Lastly and perhaps most pivotal, Isilo’s KwaZulu-Natal Public Peace Process acknowledges that conflict does not only affect political parties in conflict, but also damages social cohesion and negatively impacts investments.”

He said King Zwelithini was a champion of cultural diversity and harmony and used culture to forge unity among citizens of all races and religions, instilling values in communities where the poor and socially marginalised are cared for and looked after.

“Cultural ceremonies such as Umkhosi Womhlanga and Umkhosi Woswela have contributed to the moral wellbeing of young maidens and boys, which helped to curb the spread of HIV and Aids.”

The Zulu monarch also launched a number of national campaigns, including citizen educational programmes, and also with civil-society organisations, faith-based organisations and the government to campaign against the killing and discrimination of albinos.

Buthelezi said King Zwelithini was an avid conservationist and a caretaker of nature.

“Isilo was at the forefront of the war against rhino poaching. He argued against confining this fight through the signing of international treaties between states and conservationist group campaigns only. In this regard, Isilo partnered with Ezemvelo KwaZulu-Natal Wildlife in an initiative aimed at educating citizens about the dangers of rhino poaching in the province and the continent.”