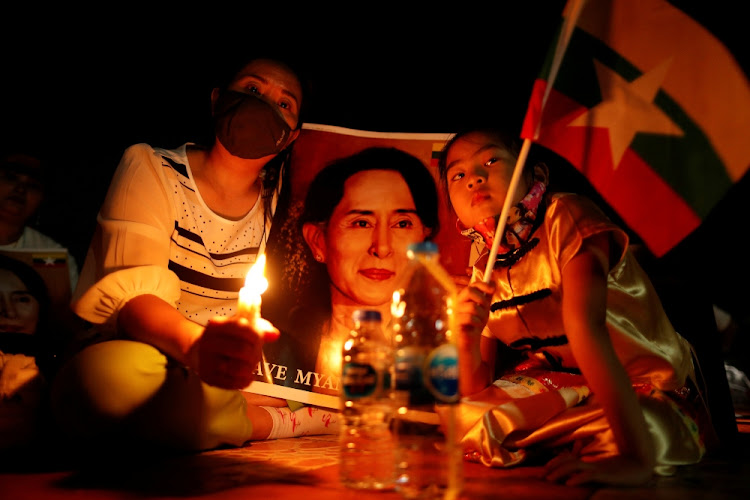 Migrants protesting against the military junta in Myanmar hold a picture of leader Aung San Suu Kyi, during a candlelight vigil at a Buddhist temple in Bangkok, Thailand on March 28 2021.
Image: REUTERS/Jorge Silva

About 3,000 villagers from Myanmar's southeastern Karen state fled to Thailand on Sunday after air attacks by the army on an area held by an ethnic armed group, an activist group and local media said.

Myanmar’s military launched air strikes on five areas in Mutraw district, near the border, including a displacement camp, the Karen Women’s Organisation said.

“At the moment, villagers are hiding in the jungle as more than 3,000 crossed to Thailand to take refuge,” a statement from the group said.

Thai authorities did not immediately respond to requests for comment.

At least two soldiers from the Karen National Union were killed, said David Eubank, founder of the Free Burma Rangers, a relief organisation.

“We haven’t had air strikes there for over 20 years,” Eubank said. “Second, these were at night, so the capability of the Burma military has increased with the help of Russia and China and other nations, and that is deadly.”

At least 114 reported killed by security forces on Saturday.
News
1 month ago

In an air attack by the military on Saturday, at least three civilians were killed in a village controlled by the KNU, a civil society group said. The militia earlier said it had overrun an army post near the border, killing 10 people.

The air assaults are the most significant attack for years in the region. The KNU had signed a ceasefire agreement in 2015 but tensions have surged after the military overthrew Aung San Suu Kyi's civilian government on February 1.

The KNU and the Restoration Council of Shan State, also based on the Thai border, have condemned the takeover and announced their support for public resistance.

KNU says it has been sheltering hundreds of people who have fled central Myanmar amid mounting violence in recent weeks.