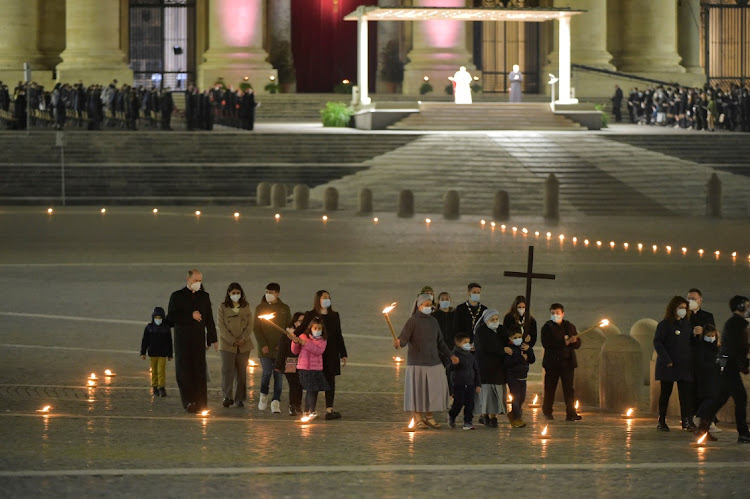 Pope Francis leads the Via Crucis (Way of the Cross) procession in the empty square outside the Saint Peter's Basilica during Good Friday celebrations at the Vatican, on April 2, 2021.
Image: REUTERS/ VATICAN MEDIA

Pope Francis presided at a scaled back “Way of the Cross” service held in an empty St Peter's Square on Friday due to coronavirus restrictions, listening as children recounted their fears and dreams.

It was the second consecutive year that the “Via Crucis” procession, commemorating the last hours in Jesus' life, was not held at Rome's ancient Colosseum since the modern-day Easter tradition was reintroduced by Pope Paul VI in 1964.

Candles in the form of a huge cross dotted an empty St Peter's Square as about only 200 people took part, sitting on either side of the pope immediately in front of St Peter's Basilica.

Different groups write the meditations each year. This time they were penned by girl scouts and boy scouts from the Umbria region and pupils from a school in Rome, most of them not yet teenagers.

Children read meditations as a small group stopped 14 times around the square to mark each of the “Stations of the Cross” starting with the first when Jesus was condemned to death by Pontius Pilate to the last when he was buried in a tomb.

The opening comments, written in the form of a child's dialogue with Jesus, recalled children who go without food or education or are forced to be soldiers.

It also mentioned the embarrassment children feel when they wet the bed, sadness when parents fight, and the fear of telling an adult a dark secret for fear of not being believed, which appeared to be a reference to sexual abuse.

The meditations at each station attempted to relate the experiences of children to those of Jesus. At the 13th station, when Jesus is taken down from the cross, a child recalled seeing his grandfather being taken away in an ambulance and later dying of the coronavirus.

Pope Francis arrived in Mosul on Sunday to pray in the decimated northern Iraqi city that was once a stronghold for Islamic State and where ...
News
2 months ago

Earlier on Friday, Francis prostrated himself on the floor of an empty St Peter's Basilica to pray at a “Passion of the Lord” service.

Francis is due to say an Easter vigil Mass on Saturday and on Easter Sunday, the most important day in the Christian liturgical calendar, he delivers his “Urbi et Orbi” (to the city and the world) message.