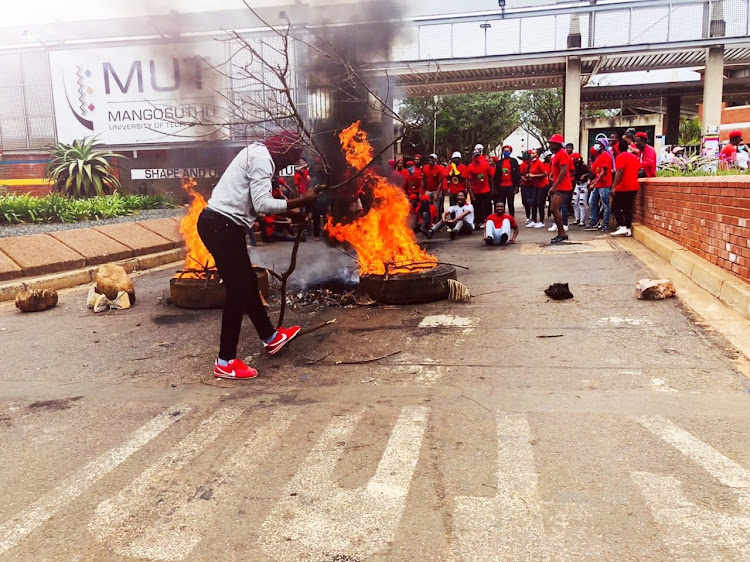 EFF students protest outside the Mangosuthu University of Technology in Durban on Tuesday.
Image: EFFStudents

A group of EFF students blockaded an entrance of the Mangosuthu University of Technology (MUT) in Umlazi, south of Durban, with burning tyres and other debris on Tuesday.

The protest is part of a national shutdown of institutions of higher learning campaign, #SizofundaNgenkani2021, being waged by students.

#RIOTS
Mangosuthu University of Technology (MUT), continues adhering to the National shutdown mandate as Fighters intensify the call for DHET to respond on the #SizofundaNgenkani2021 demands.#NtumbaStreet#BladeWeCantBreathe#BladeMustFall#NationalShutdown@EFFSouthAfrica pic.twitter.com/BOlyiXIDhM

The campaign, which kicked off on March 15, is aimed at forcing the department of higher education to meet students' demands of:

MUT spokesperson Bheki Hlophe said a statement would be issued.

Metro police spokesperson Supt Zama Dlamini said: “Our metro police as well as SAPS are at MUT. The students are protesting and both lanes coming in and going out on Mangosuthu Road were closed due to dirt being burnt on the roadway.”

She said while the roads are opened for now it is advisable for motorists to find alternative routes if possible.

The SA Union of Students on Thursday confirmed it has ended the national shutdown at universities across the country after the higher education ...
News
1 year ago