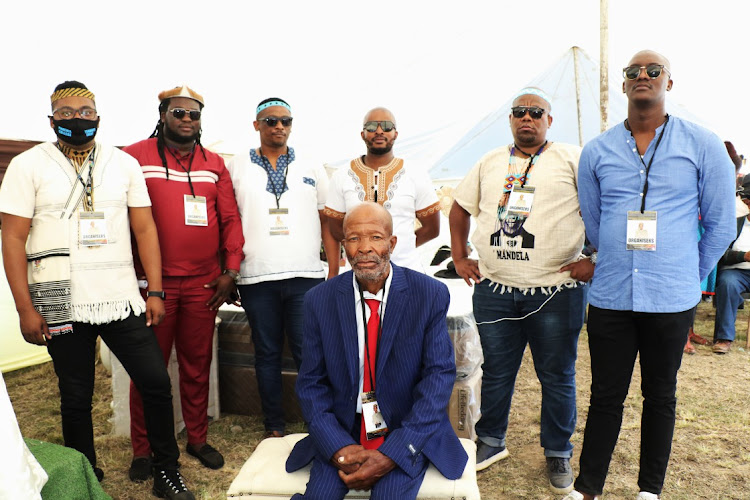 Eastern Cape celebrated traditional nurse (ikhankatha) Mthunzi Mlenze, 76, who is retiring after 32 years of unbroken service and being beacon of hope of the custom of ulwaluko having no injuries or deaths, had a hero's thanksgiving party held on his behalf at his Liefeldt village near Qonce on Sunday. He is pictured with some of organisers Mawethu Kotobe (treasurer), Nkululeko Kotobe, Bantu Mayeko (chairman) Mkhululi Gawula (deputy chair), Sakhele Fikayo and Zenande Nombakuse who were some of 1500 initiates he had looked after.
Image: LULAMILE FENI

While thousands of boys successfully undergo the old-age rite to manhood in the Eastern Cape every year, some are not so lucky.

Many initiates have undergone penile amputations as a result of a lack of proper care at the hands of inexperienced amakhankatha (traditional nurses).  Some have paid the price of that inexperience with  their lives.

A lack of wound management by amakhankatha has often been cited as one of the primary reasons for initiate deaths in the Eastern Cape.

Renowned Qonce-born traditional nurse Mthunzi Mlenze seems to have been one of the few exceptions to this rule.

In a career spanning 32 years which involved taking care of about 1,500 initiates, none of Mlenze’s boys has ever been admitted to hospital or ended up dying while undergoing the traditional rite of passage.

Tributes continue to pour in for eminent traditional surgeon

Tributes continue to pour in for renowned Eastern Cape traditional surgeon Qaqambile Siyongwana, who died of Covid-19 complications on ...
News
3 months ago

As the 76-year-old draws the curtain on an illustrious career,  a group of adult men, who had been cared for by the legendary Mlenze as young initiates themselves, decided to spring a surprise by hosting a special send-off for the old man.

Some of them are now holding key positions in government, the corporate world and others have become politicians.

They have also become proud parents.

One of those behind honouring Baw’uTshawe, Mlenze’s clan name, was Mkhululi Gawula, who now works as a national manager for the agriculture, rural development and land reform department. He described him as a beacon of hope for traditional initiation.

“We owe our being as men  to Baw’uTshawe. He attended to hundreds of initiates who are now respected men in society and in their work places, ” he said.

“We are celebrating our commander, our hero, a man who had for more than  30 years, braved bad weather and left the  comfort of his home to go and look after initiates in the mountains without looking for any reward.”

Eastern Cape traditional leaders are mourning the death of one the province's most celebrated traditional surgeons, Mzimasi "Bra Zet" Mtimka
News
4 months ago

“I started being ikhankatha when I was an initiate 54 years ago. I used to help my fellow initiates with small challenges they experience in the absence of our amakhankatha.

“My interest grew as I realised that I have a natural gift for doing this work,”  Mlenze said.

After he graduated from initiation school, Mlenze continued with his trade on a part-time basis due to work circumstances.

In 1989, Mlenze was officially appointed by elders as the village traditional nurse.

As his popularity soared, so did the demand for his services even in other villages around Qonce.

“I decided to buy a bicycle to be able to move faster to all corners of these communities and I am still using a bicycle.

“I would wake up early and by 4am leave my family for initiation schools and come back home at about 11am.

“I would go back again at about 3pm and returned home at about 7pm. Sometimes I will sleep over at initiation school, especially in the first eight days,”  Mlenze said.

Parliament concerned about deaths of initiates in Eastern Cape

In the 32 years there were no injuries.

Gawula said this showed the level of professionalism and skill the man had.

Apart from hosting the send-off, his former students bought him a bedroom suite. ​

Mlenze said his secret to no injuries was his passion for the trade, respect of human life and the custom of ulwaluko.

“To me this is a calling and I am not doing it for money or praise, but to give a service to my community  and maintain our custom and fear of God.

“I never expected this tribute or honour by these men, but I am thankful to God that I have done with aplomb the responsibility he entrusted or bestowed to me as his servant,”  Mlenze said with tears on his wrinkled face.

Provincial co-operative governance and traditional affairs reported last year as many as 500 boys died at initiation schools in the past five years while health authorities had previously revealed that 233 initiations had suffered penile amputations between 2006 and 2014 alone.