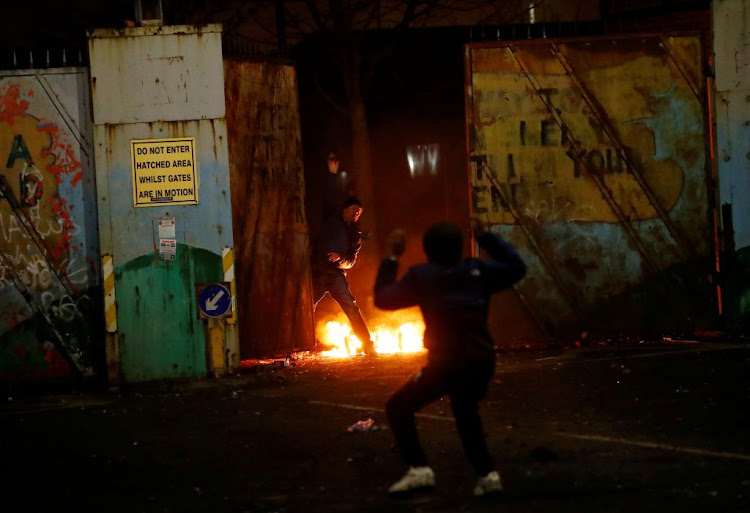 Protesters are seen at the "peace wall" gate into Lanark Way as protests continue in Belfast, Northern Ireland, on April 7 2021.
Image: REUTERS/Jason Cairnduff

Northern Ireland's power-sharing government put aside factional differences on Thursday to appeal for calm after more than a week of nightly violence partly fuelled by frustration among pro-British unionists over post-Brexit trade barriers.

Hundreds of youths in the British province's capital Belfast set a hijacked bus on fire and attacked police with stones on Wednesday in scenes reviving memories of decades of sectarian strife that claimed some 3,600 lives prior to a 1998 peace deal.

The latest violence has injured 55 police officers and seen boys as young as 13 and 14 arrested on rioting charges.

"We are gravely concerned by the scenes we have all witnessed on our streets," said the compulsory coalition, led by rival pro-Irish Catholic nationalists and pro-British Protestant unionists.

"While our political positions are very different on many issues, we are all united in our support for law and order and we collectively state our support for policing," its statement added.

A stabbing rampage that killed three people and wounded three others in the southern English town of Reading was an act of terrorism, police said on ...
News
9 months ago

Britain's minister for Northern Ireland Brandon Lewis was travelling to the province for talks, the BBC broadcaster said. To the south, Ireland's government had urged the province's leaders to come together after days blaming each other.

Irish nationalists Sinn Fein and others accused first minister Arlene Foster's Democratic Unionist Party of inflaming hostilities with their opposition to the new trade barriers that their supporters feel erase part of their UK identity.

After London left the EU's orbit at the start of this year, checks and tariffs were introduced on some goods moving from mainland Britain to Northern Ireland as the province was now bordering the bloc via EU member Ireland.

The DUP has pointed to a police decision last week not to prosecute Sinn Fein for a large funeral last year that broke Covid-19 regulations. They called for Northern Ireland's police chief to step down over the matter.

Irish foreign minister Simon Coveney said a number of factors were responsible for the anger, and that the post-Brexit trading arrangements were clearly one of them.

Foster said on Thursday it was not the time to rehearse those arguments.

"It's safe to say we should all know well that when politics fail or are perceived to be failing, those who fill the vacuum offer destruction and despair," she told the regional assembly, which was recalled to discuss the clashes.

"We cannot allow a new generation of our young people to fall victim to that path or be preyed upon by some who prefer the shadows to the light."

Britain's most senior police officer has sought to reassure women it is safe to walk the streets of London at night after one of her officers was ...
News
1 month ago

Police said on Thursday that in some instances adults had stood clapping while youngsters committed crimes of violence.

Deputy first minister Michelle O'Neill of Sinn Fein said the spreading of trouble to an interface between unionist and Irish nationalist communities was a dangerous escalation and that it was a miracle nobody had died.

Large groups threw fireworks, bricks and petrol bombs at each other late on Wednesday from either side of one of Belfast's so-called "peace walls" that have divided the two communities in parts of the city since the so-called "Troubles" began.

Parts of the region remain deeply split 23 years after the Good Friday peace deal. Many nationalists aspire to unification with Ireland while unionists want to stay in the UK.

The European Commission, which is in talks with the British government to try and ease some of the trade barriers, condemned the violence.

"This needs to stop before somebody is killed or seriously injured," added Ireland's Coveney on national Irish broadcaster RTE. "These are scenes we haven't seen in Northern Ireland for a very long time, they are scenes that many people thought were consigned to history."