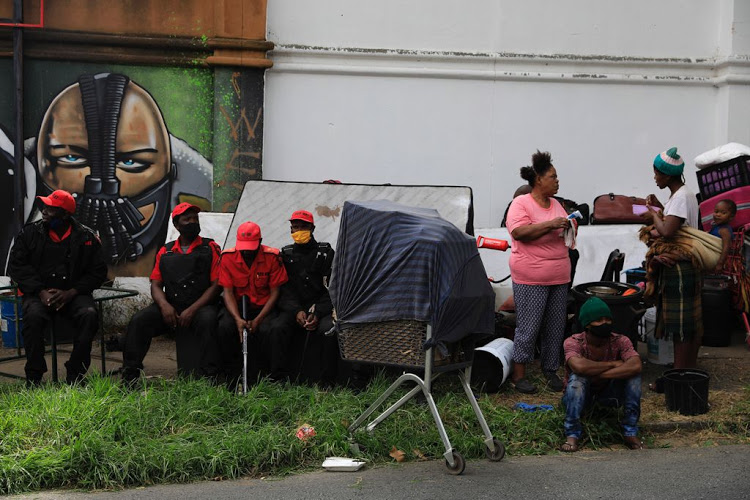 The City of Joburg's social development department says some of the people who were evicted from a property in Bompas Road have asked to be reunited with their families.
Image: ALON SKUY

Some of the people who were evicted from a private property on Bompas Road in Dunkeld West, Johannesburg, have used their homeless situation as an opportunity to reunite with their families.

In a statement, the City of Joburg’s social development department said it would assist with the relocation of some of the people who asked to be taken to Orange Farm and Palm Ridge to be reunited with their families.

The city is also placing some of the people in shelters, but others have already pointed that they do not wish to be placed in shelters. According to the city, this is not the first refusal by the same group of people. Previous attempts to relocate them were rejected, it said.

“The city is in discussion with the provincial government and other key stakeholders to find a solution. However, the city’s comprehensive strategy to assist the homeless will continue to include shelter placement, community reintegration and family reunification,” the city said in a statement. It said it may need to call in the department of home affairs to assist with the undocumented people found on the site.

Durban flat dwellers spend the night on the street after eviction

Several families were forced to sleep on the street after they were evicted from a high-rise Durban block of flats on Tuesday.
News
3 months ago

On Tuesday, an estimated 50 people were evicted after they illegally occupied a private property in the plush northern suburb. The owner, who is believed to be overseas, had obtained an eviction order from the courts.

“The city had previously received numerous complaints from residents about noise pollution and waste pollution that was accumulating on the property and the use of a fire hydrant for general water usage,” the city said in a statement.