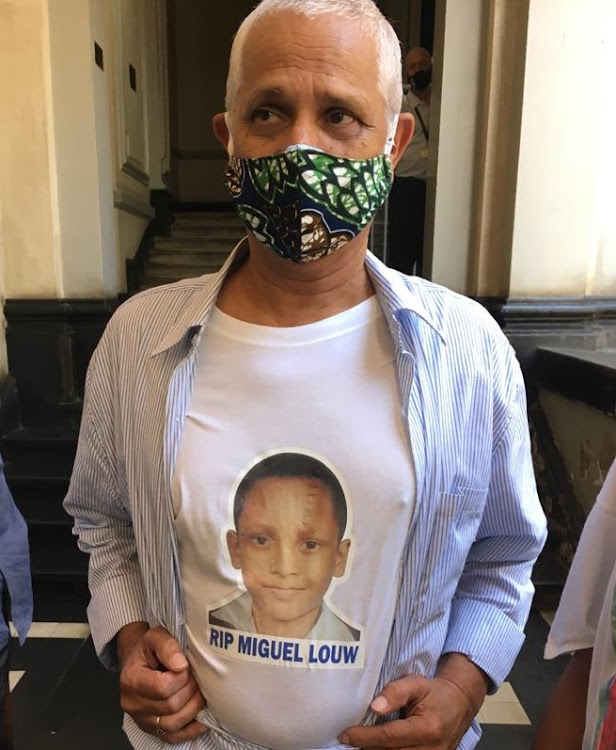 Family friend Trevor Paulsen at the high court in Durban where Mohamed Vahed Ebrahim was found guilty of the kidnapping and premeditated murder of Miguel Louw.
Image: TANIA BROUGHTON

The sentencing of Mohamed Vahed Ebrahim, the man who was found guilty of the kidnapping and premeditated murder of nine-year-old Miguel Louw is expected to happen in the Durban High court on Monday.

The nine-year-old boy's body was discovered in bushes in Phoenix in September 2018, about six weeks after he went missing.

Louw, who was a grade 4 pupil at Sydenham, was last seen in the company of Ebrahim, who was a friend of his mother Raylene and used to do odd jobs for the family.

Ebrahim pleaded not guilty to all charges and chose not to testify.

When he was first arrested‚ he was found in possession of Miguel's original birth certificate as well as Raylene's ID.

After two years on the run a conman was finally arrested for having allegedly preyed on desperate families, including that of slain Sydenham boy ...
News
10 months ago

Durban high court judge Jacqueline Henriques said the defence had submitted that there were other potential suspects and that the court should not exclude the possibility that he was killed by someone else and his body placed close to Ebrahim’s home to cast suspicion on him because it was public knowledge that the child had been last seen in his company.

“I have carefully considered these hypotheses and have no hesitation in rejecting them,” the judge said.

A juvenile witness identified Ebrahim in open court in 2019 as the man who went to Louw's school on the day of his disappearance.