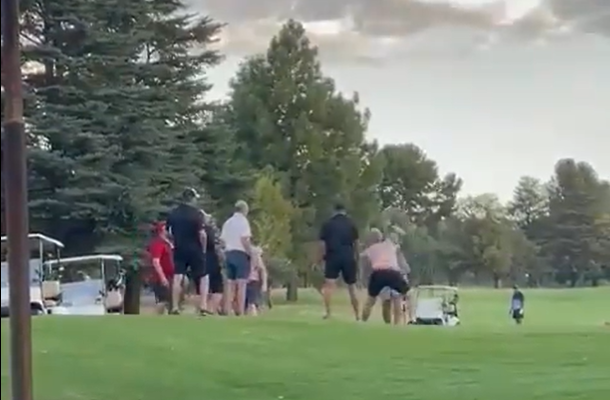 Armed with clubs and a flagstick, drunk golfers attacked each other at the final hole of the Maccauvlei golf club late on Friday afternoon after one accused another of stealing his cellphone.
Image: Screengrab

What was meant to be a friendly round of golf to raise funds for a Vaal school turned out to be anything but.

Instead, armed with clubs and a flagstick, golfers attacked each other at the final hole of the Maccauvlei golf club late on Friday afternoon.

The turmoil erupted when one of the golfers, who was participating in a golf day for Laerskool Vryheidsmonument in Vereeniging, accused another of having stolen his cellphone.

The innocent golfer, according to the club’s general manager Deon Kruger, had in fact picked up the cellphone which was lying in the rough of the 17th hole when he heard it ring.

Low-key friendly game of golf with the manne at Brakpan Golf Club. ⛳⛳👌👍🤣🤣🤣🤣🤣🤣🤣🤣 pic.twitter.com/Km4XZGUDZt

“The golfers were playing 18 holes. A player on the 18th hole had lost his phone and when he called it a golfer on the 17th hole answered it.

“There was a heated exchange of words and a rumpus when the players approached each other. This whole thing comes down too much alcohol and the players, who until then had been well behaved, drinking on the course. From the video you can see that both were incredibly wobbly on their feet.

“We do not condone nor allow drinking on the course but some players, like these, had snuck alcohol on to the course and were drinking while playing. The drinking resulted in this very unfortunate incident,” Kruger said

He said the players both left after the argument.

“We held an emergency meeting about what happened on Monday. Because it was a golf day we have no control over who plays. This was organised by the school. None of those who were involved in the altercation are our members,” he said.

Kruger said that they had written to the school expressing their disapproval.

“Never in the 15 years that I have been here have I seen anything so barbaric taking place on the golf course. Our club definitely does not condone such behaviour,” he said. The flyer advertising the golf day which took place at Maccauvlei golf course where golfers ended up attacking each other amid accusations of stealing a cellphone.
Image: http://www.laerskoolvryheidsmonument.co.za/

Surita Pita, who is listed as the contact person on a flyer for the event, confirmed that the golf day was to raise funds for the school.

“We do not know what happened, but it is terrible. It is embarrassing,” said Pita. She said that those involved in the fight were not parents of children who attend the school.

“We have no idea who they are,” she said.

Tiger Woods back home and recovering after car accident