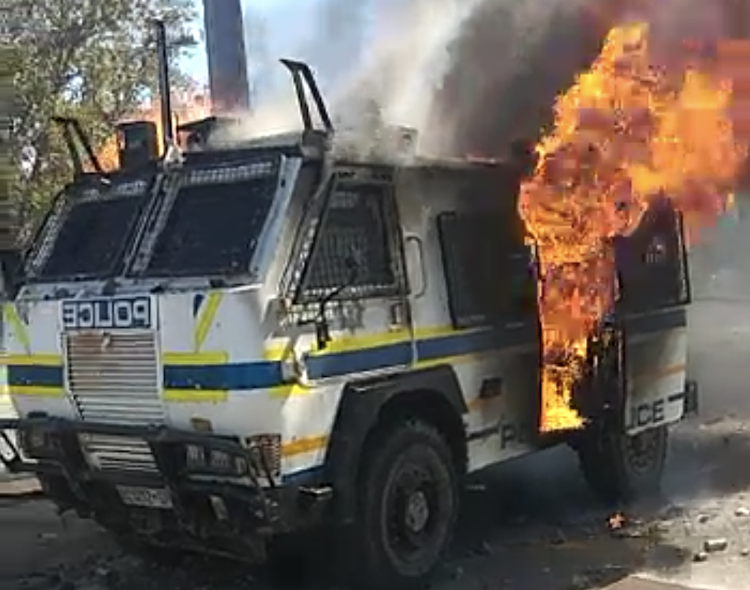 A police Nyala armoured personnel carrier in flames in Mthatha after a skirmish between protesting Walter Sisulu University students and police.
Image: SUPPLIED

Violence broke out in Mthatha when protesting students charged police and torched a Nyala armoured personnel carrier at the entrance of Walter Sisulu University's Nelson Mandela Drive campus on Monday.

This came up after protesting Walter Sisulu University students blockade the N2  road near the campus, effectively blocking traffic to and from the town.

In one video, overwhelmed police officers are seen retreating while students, shielding themselves with mattresses, wooden planks, and roof sheeting, charge at them while hurling rocks.

The students chased police off the campus and across the road. In another video, the Nyala is seen engulfed with flames. Another video shows students dancing and singing alongside the burning vehicle while wearing pieces of riot gear left behind by police.

After the fire subsided, an abandoned police firearms inside the wreckage.

The road is scattered with debris and rocks as police regroup. Other armoured vehicles were also seen patrolling the area.

A police Nyala in flames during a skirmish between police and Mthatha university students. pic.twitter.com/zpq1EuVKd8

An abandoned police firearm lies in the burnt-out wreckage of a Nyala armoured personnel carrier after a skirmish between WSU students and police. Video: LULAMILE FENI pic.twitter.com/GMt8DjsLlV