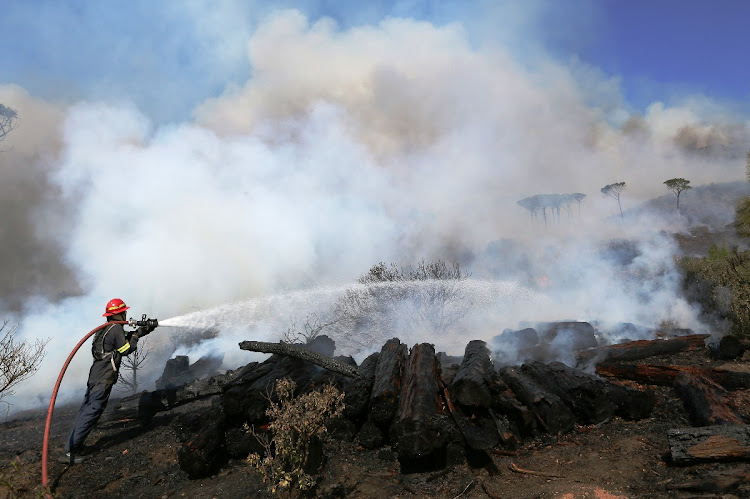 Firefighters battled to extinguish the runaway fire that engulfed Rhodes Memorial and destroyed a library at the University of Cape Town.
Image: Ruvan Boshoff

A man accused of starting a fire, potentially contributing to the spread of this week’s Table Mountain wildfire, appeared briefly in the Cape Town regional court on Tuesday morning.

Frederick Mhangazo, a Tanzanian national, was charged with arson.

His case was postponed until next week.

Mhangazo was taken into custody on Sunday night.

Mayoral committee member for safety and security JP Smith said on Monday the suspect, in his 30s, was apprehended in the vicinity of Devil’s Peak after being spotted by a resident who tracked him down with the help of his sons and the family’s dogs.

Table Mountain National Park said initial investigations showed a fire suspected to have been left unattended by a vagrant was believed to have been the cause of the original blaze which ignited on Sunday morning.

The University of Cape Town (UCT) has announced a temporary suspension of all lectures for the rest of the week as management continues to assess the extent of damage to buildings, including damage to precious archives inside the university’s Jagger Library.

In a memo to students vice-chancellor Prof Mamokgethi Phakeng urged the university community to unite to best recover from the ordeal.

“We cannot replace the treasures of scholarship we have lost, but we can create new treasures out of our own scholarship,” she said.

“In the same way, each of us can rebuild our own sense of purpose out of this tragedy. To do so, we need to help each other. This is a team effort.

“With your help, we will emerge stronger from this terrible episode.”

The fire remains largely contained, although waterbombing of hotspots continued on Tuesday.

“Overnight the wind dropped significantly and helicopters have been waterbombing the fire lines since early this morning,” the Western Cape provincial government said.

“Our first priority remains fully extinguishing all the fire lines,” he said.

“Then over the next few days firefighters will continue to dampen down the affected areas and monitor for flare-ups until we are sure the fire is out.

“Damage assessments will be done and once the fire has been extinguished, an  investigation into the cause of the fire will be conducted.”